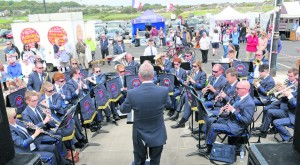 Prom Fest once again proved a great success for Tramore last weekend with warm sunny weather on the key day of Sunday.
It was fine most days and the opening was again held on the prom as it marks the anniversary of the four air rescue men that died 18 years ago in the tragic helicopter accident in the Sandhills.
We watched wrestling exhibitions, music groups, a dog show, face painting, food market and much more.
The committee are to be complimented on their energy and hard work put into the event.
Every Event, on behalf of the City Council took over some of the management of the event this year and it worked out well although the air show could not be funded.
We really liked the kite flying display in front of the old Hydro site.
For just €5 you could fly a kite and it made for a most colourful event.
The Prom was closed off and the car park near the boating lake was able to take in many cars, so there was not too much congestion.
The WAMA showcase went down well and attracted a good young crowd on Sunday afternoon.
TCRFM also provided music too and the Prom fest caravan had leaflets available of events. They also had a useful map
Tramore musical society provided a few performances and there was also a wobbly circus, as well as circus workshops which was a really neat idea for kids.
Street theatre and other performers in costume could be seen.
Perhaps the biggest showcase was the festival market with many stalls selling food, jewellery and other items. We bought some special sea weed cure there for example, hope it works out!!
The mixed wrestling match was great craic and attracted many video cameras and camera phones.
The Barrack St. Concert Band played on Saturday, nice to see them come back to Tramore, maybe they might come out during race week also.
Music pubs and restaurants were busy over the weekend and given the weather marked a positive start to the season and school holiday period
Well done again to the Tramore Chamber of Commerce and Tourism for their efforts and Waterford Council, partners and other various sponsors.