‘We are the forgotten city and county’ 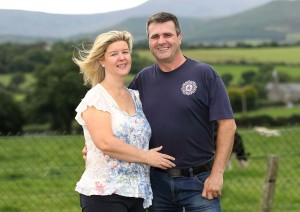 THE Ridgard family have criticised An Taoiseach Leo Varadkar and Health Minister Simon Harris for their failure to provide Waterford and the South-East with 24/7 cardiac cover.
“I voted for Fine Gael in the last election but I won’t be voting for them again,” said David Ridgard.
“We are the forgotten city and county. In the Cabinet reshuffle, nobody was put in to represent the people of Waterford. We have been left down for our hospital, for the university, everything. John Deasy has been given a position in America – what good is it having one of our elected representatives from Waterford in America?”
He continued: “Leo Varadkar was willing to come to Waterford to cut a ribbon at Bausch & Lomb recently. He’s willing to go away to whatever festivals he wants, but yet he wasn’t able to come down and meet consultants at UHW as he said his schedule was too busy.”
David’s wife Helen says the people of Waterford must “point directly at Leo Varadkar and Simon Harris and hold them to account”.
“They can sign the papers and get this delivered if they really want to,” she said.
“We’re calling for this to be done now, not in six months’ time, not in a year. After what happened to Tom Power, I thought they would fix this situation and never allow it to happen again. Nothing has changed since. What good is another review? If somebody dies again, they will most definitely have blood on their hands. This can’t be allowed to happen again to another family.”
In relation to the ongoing debate over the catchment area for the UHW service, Helen, who is heavily involved in promoting the Waterford Greenway through her work with Kilmacthomas Social Enterprise Group, says tourist numbers must also be taken into account.
“We now have huge tourist numbers coming into the area,” she said.
“Thousands of people are coming to use the Greenway. We are not able to cater adequately for these people should they suffer a heart attack.”
David pointed out that under health and safety regulations an employer has a duty of care to his employees.
“The government is the caretaker of the population so they have a duty of care to us but are currently remiss in that duty,” he said.