Home » Entertainment » Events » A Bite of Mexico in Dunhill

A Bite of Mexico in Dunhill 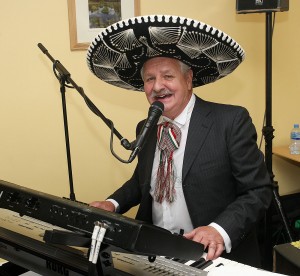 Pat Comeford delighting the crowd with a selection of Mexican songs

El Sombrero is a new business opened in the Dunhill Business Centre.
Mexican ambassador Carlos Garcia De Alva Zepeda attended and spoke about Irish Mexican connections going back centuries to the days of Mexican Independence.
El Sombrero is a new venture with a Mexican and Waterford connection.
The husband and wife team of Javier Garduno and Michelle Comerford, daughter of Waterford entertainer Pat Comerford.
Pat, who lived a number of years in Mexico city, provided music for the event, which included Mexican food as well as some speeches.
Mexican recipes and Irish harvested herbs, green tomatoes and fruit will be used in the El Sombrero food products.
Authentic Mexican cuisine and salsa sauces are produced in Dunhill creating new jobs in the area.
Javier is here since 2007 and undertook a special business course in WIT under Dr. John Maher in Finance and Information Systems, before undertaking this venture.
They also make enchiladas, made from corn and guests were treated to some of their products.
Norbert Thul from Germany, who is also doing sauces in Dunhill, was especially thanked for his guidance.
Norbert assisted in the food serving.
Cathaoirleach of the Comeragh District Cllr. Liam Brazil praised the business venture. He was delighted to see local Irish jobs created. Dunhill and its group were doing great work in attracting business to the area and the Enterprise Board were also assisting, he said. Creating jobs in rural areas is critical and now there are over 70 jobs in Dunhill, with 5 from El Sombrero.
Senan Cooke, was delighted to see the new venture. He noted how the Comerfords were strong in music and sport in both Kilkenny and Waterford. One of the most famous Kilkenny hurlers is Andy Comerford, added Senan, who is a driving force out in Dunhill
The Mexican Ambassador said it was his fifth visit to Waterford. The last time was to Belview for the Glanbia opening. Ireland has risen from the 20th to 11th largest trading partner with Mexico.
Living here for years he noted how the nations are similar with big neighbours, a history of independence struggles, religion and a love of life, family and music.
The Irish also like Mexican food and 31 restaurants and burrito outlets now trade in Ireland, added the Ambassador.
He looked forward to more positive relations with Ireland and a new air link direct to Cancun will boost tourism and business to Ireland.
Mexico buys food products from Irish dairy firms, meat and pharma products as well as computer software. This has boosted trade.
For more information, check out the El Sombrero Facebook page.