Home » Entertainment » Events » Between the lines 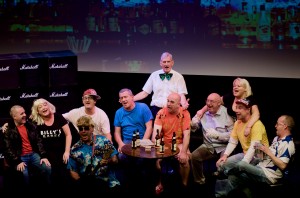 The Bilberry Goats’ Monday Club, with thanks to Wayne Browne for the picture.

The Bilberry Goats
Billed as The Bilberry Goats Alive Again…3rd Time Lucky!!!, there was a strong sense of nostalgia among a capacity audience who – like the cast – were remembering the good times as they reprised their greatest hits. When it was funny, it was a howl and a hoot but at times it was slowed down with too many characters onstage, sharing telegraphed jokes.
That sense of nostalgia was heightened with a farewell to Denny Corcoran – Do You Remember The Old Times – and a recreation of his Tops sketch, Heading For The Oscars, with Nicky Cummins, Paul Corcoran, Tony Corcoran and Brenda Giles.
Special guests added a quality to the show with Hazel Tebay in scintillating form for This Is My Life. Chloe McGrath impressed with two Les Miserables songs and Kayleigh Quinlan was dynamic for Don’t Rain On My Parade. Damo MCDonnell downed a pint while doing a Jem Casey with A Pint Of Plain.
Davy Sutton shone in an Arthur Brothers and Davy Furey sketch, but it was nearly the interval before the show came to sparkling life with The Good Council, a skit on City and County meetings.
The good wine was kept for the second half, with the cast doing a d’Unbelievables in the audience. Davy Sutton and Hazel Tebay kept a Mossy The Magician from Monastery Street sequence going, hoping for a punchline to pop up out of a hat. Brian Collins was a scream in A Deise Dressing Room and David Hennessy was excellent.
I loved the Old Folks Choir Practice with Dee Lanigan in brilliant form for the perfect closer. A treat. The Monday Club hit the spot and sang out with Help From My Friends.
The comedy team were Tony Corcoran, Davy Sutton Scol Grant, Brenda Giles, Brian Collins, Brian Power, Hazel Tebay, David Hennessy, Paul Corcoran and Nicky Cummins.
Tony Corcoran directed and wrote the script. Michael Grant and Padraig O’Griofa produced for Waterford Variety Theatre Club.

The New Triangle
This is a clever combination, in the folk genre, the joining together of the last of the original Dubliners John Sheahan with two of the more iconic contemporary folk artists Declan O’Rourke and Damien Dempsey. They are touring under Pat Egan Management and while this is a mix of poetry and music and maybe too much nostalgic reminiscence, the audience in the Theatre Royal gave them two standing ovations.
They walked onstage, sat down and ‘noodled and doodled’ musically before launching into The Hot Ash Felt. John read a tribute poem to Luke Kelly from his recent collection Fiddle Dreams and then played Raglan Road on the tin whistle while Damien and Declan sang it and the mood was warm and nostalgic, with a lot of mutual admiration and John’s droll humour. His Among Friends eventually came to Damien’s higher more angry songs like Canadian Geese, which painted an image of driving down Kilbarrack Road out to the sweep of Dublin Bay. It had the advice – get out while you can; you can always come back.
Barney McKenna was remembered for his ‘Barneyisms’ – an obstacle confusion. Damien updated the mood with Fiddler’s Green and it reminded of a session with banter and chat and an unrehearsed vibe. He galvanised the audience with the poignant Chris and Stevie (I’m Missing You Today).
Declan did The Villain Curry Shaw from his Famine set and they gentled into the interval with Kelly The Boy From Killann.
After the interval, it was a memory of Ronnie Drew – “the epicentre of the craic” (back in 1962 The Dubliners started out as The Ronnie Drew Ballad Group). The audience loved Sheahan’s instrumental tunes and St Patrick’s Cathedral was excellent. Declan sang The Children of Sixteen and Damien was powerful with Sing All Our Cares Away.
Ciaran Bourke was remembered with a Sean Nos song as Gaeilge – Cois Fharraige. Declan delighted with Galileo and Damien was his ‘clenched fist’ angry best for Colony. The audience hummed along for The Marino Waltz as they ‘started the finish’ with a beautiful Rocky Road To Dublin, to a standing ovation and their second encore, The Auld Triangle, was amazing for The New Triangle.

Valerie Leahy
Valerie Leahy (soprano) accompanied by Eimear Heeney (violin) and Marian Ingoldsby (keyboards) delighted with a Sunday lunchtime concert at the Museum. She impressed with classical arias, contemporary songs and popular songs that had the audience singing along.
Opening with a beautiful Schubert, Ave Maria, she followed with Porgi Amor from Mozart’s Le Nozze di Figaro and she showed her clear contemporary style with a selection from Marian Ingoldsby’s Song Cycle based on Emily Dickenson’s poems. This was a stark style, as chilly as the ‘Nordic’ November in Amherst as described by Nuala O’Connor in her novel Miss Emily. There was also, a wintry tonality in Eimear Heeney and Marian Ingoldsby’s Waterscape.
Leahy delivered a beautiful Think Of Me from Phantom of the Opera and her soaring version of Dvorak’s Song To The Moon from Rusalka was splendid.
Ms Heeney was in entertaining form for the Theme from Ladies In Lavender, the 2004 film written and directed by Charles Dance. Her version of Czardas by Italian composer Monti was warm and wonderful. Valerie returned to charm the audience with Tony Christie’s song So Deep Is The Night (Chopin), and her Waltz Of My Heart from Novello’s The Dancing Years was mellow and nostalgic. The Il Divo hit Mama was a perfect tribute to her mother who passed away last year, with its poignant “Thank you for who I am”. I’m sure it made her mother smile.
The audience loved I Could Have Danced All Night (My Fair Lady) and sang along with the encore Can’t Help Lovin’ Dat Man from Showboat.

In The Veins
Dolores Ronayne, who lives on the inspirational peninsula of Rinn a gCuanach, Helvick in Co Waterford, has brought out her first volume of poetry – In The Veins. She is no stranger to words and performance as she has written and performed theatre monologues. She is imbued with a Celtic tradition and in her poetry takes on various persona connected to myth and infused by contemporary styles. A sense of the magical, the sensual, the influence of the seasons, the rhythms of life and a sense of humour about the sexual potency of women. Poems about Slieve na mBan, warrior women like Grainne and horned witches add a frisson in exciting prose poems and a more lyrical free verse form.
The poetry pours out onto empty pages, the writer’s voice is supported and encouraged and the aesthetic world, she aptly creates has energy, exhaustion, exasperation, words in flux, instances of hurt, betrayal, gratitude and generous love. Her poems explore and offer sanctuary and here and there Goddesses, earth mothers and flirtatious ladies weave nets, snares, and tapestries of wonder and hard-earned wisdom.
The poet Thomas McCarthy, who launched her collection in The Park Hotel, contributed a foreword praising her humanity and sense of community. He instanced her elliptical style that is personal and perhaps confessional, with themes of sexual violence, ageing, and exploitation.
At times she breaks words down into individual letters as if wishing they could take on a deeper meaning, a meaning not to be ordinary or mundane.
I liked family poems like Father, dealing with Republican politics, prison, safe houses and black arm bands. Poems like Rain 2012, and Twin, ask questions that while not directed at the reader or audience, require a response, a reaction.
In the exciting poem Inside Out, you can feel the energy vibrate; “our coupling was a colliding of two worlds”. At times, there is a rush of words “in Viagra-fuelled excess” and the marvellous image “I wore red and white. Red keeps blood from the light”.
Two Sunday prose poems recreated more than an innocent memory of church-going and Sunday trout as “lusty smells” of food and afternoons of plunging into water and seaweed or growing up to go out for Sunday fun “encase my thighs in black-bold pants, pull on yellow-glad cardigan with frills”.
My favourite poem is She Catches The Loose Bridled Ginger Horse, and to read it out loud was a sensual joy. Carthach O’Ceallaigh did the colourful illustrations and the publication was supported by Waterford City and County Council.

Working In Glass
At a recent Glass Symposium in WIT where some of the more innovative practitioners of making glass and art glass from USA, UK, France, Germany and Denmark shared experiences to help map out a future for glass making in Waterford, I was impressed by the way some of these people developed their art.
Mark Angus, a stained glass artist, has studios in the German village of Frauenau, where his painting and colouring of glass has continued his fine reputation for developing via traditional methods, with beautiful sculptural images, mostly in blue and yellow, and his panels for windows, churches, museums and cathedrals are so contemporary.
Frauenau offers a wide range of music, drama and cultural programmes as well as glass and ceramic three-week courses. Every year, up to forty concerts take place, from pop to jazz, rock to classical, with literary readings and cinema events, as well as dance and colourful festivals.
At Meisenthal France, Yann Grienenberger uses the premises as a gallery, glass-making studios as well as hosting concerts for music and performance arts. Some of the music and drama work is performed in the open air.
The American design work in glass by Treg Silkwood and his partner Candace Martin is beautiful and delicate. He catches the big sky panorama of growing up in Montana and his work with Martin reflects their interest in nature and the seashore of the Bay Area in California. There is such depth and beauty in their creations. During September, Treg Silkwood blew beautiful glass in Cathedral Square.
At the Symposium, I met a young man from Criostal na Rinne where his father, Eamonn Terry, a Waterford Master Craftsman, produces bespoke full-lead crystal gifts from his Gaeltacht studio.
Then, as I began to write this piece, Calvin Manning from Newfoundland sent me a photo of a Crystal Cod that has gone on display in Newfoundland. This fish sculpture was created by a Waterford Crystal craftsman, Michael Murphy, and presented to the Mayor of Riverhead in Newfoundland by Senan Cooke of Dunhill Development as part of a shared cultural event Festival Of The Sea.
Waterford’s fame for crystal is still held in high regard and who will be the glass artists of the future to continue such a vital tradition?
Imagine a Glass Festival based in the Viking Triangle with glass blowing in Cathedral Square, flame sculpture work on the veranda of the Museum and glass painting/engraving outside the Crystal showrooms linked to arts and craft exhibitions, music, dance and performance.