Home » Uncategorized » Comedy comes to Curraghmore for All Together Now

Comedy comes to Curraghmore for All Together Now 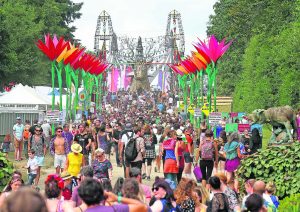 It’s a case of ‘LOL Together Now’ as one of the country’s biggest festivals announces its comedy line-up!
The Over The Ha Ha Stage at All Together Now on the Curraghmore Estate will be graced by some of the biggest and best names in Irish comedy over the August Bank Holiday weekend.Those who attended last year will undoubtedly remember the Brunch With…which took place with renowned comedian Reggie Watts and spoken word artist Saul Williams.
Something equally as special lined up this year – so stay tuned! All will be revealed shortly.In the meantime, let’s look at some of the fine purveyors of comedy who will be appearing across the weekend at the Over The Ha Ha Comedy Stage.They don’t come much bigger than the mighty award-winning comedian, actor, TV presenter and writer, Tommy Tiernan.The Navan man has smashed box office records all over the world, including 250 (and counting) sold-out shows at Dublin’s iconic Vicar St, and his numerous DVDs have gone platinum several times over.
His groundbreaking TV show has been described as the future of chat shows and it will return for a new season later in the year. An accomplished actor, his recent credits include Druid Theatre’s production of Sive, ‘ Fr Ted’, ‘Dave Allen at Peace’ and most recently he appears as Da Gerry in the hit Channel 4 comedy series, ‘Derry Girls’. Other established acts set to grace the stage include the biggest selling comedian at the Edinburgh Fringe Festival, Jason Byrne. His original brand of high-energy intelligent lunacy ensures that there is no other comedian like him and his sell out shows have attracted accolades including the highly coveted Perrier Newcomer Award Nomination and the Perrier Award Nomination.
The last 18 months have been a whirlwind for Deirdre O’Kane – voicing the hugely successful Gogglebox for TV3, producing Ireland’s largest ever charity comedy show for Comic Relief at the 3Arena, hosting the revamped IFTA Film and Drama Awards for national broadcaster RTÉ, and reaching the finals on the dancefloor of RTE smash hit Dancing with the Stars.
Steve Frost Improv All Stars, meanwhile, are the Premier league of improvisers. This troupe of fantastic performers transform random audience suggestions into something spontaneous and magical, never to be seen again, comedy. If you’ve ever watched ‘Whose Line Is It Anyway’ you’ll understand that when it goes right – it is the funniest thing ever. When it goes wrong – it’s even better. Your MC for the weekend is last year’s host, the always excellent Adam Burke. A regular host of the Irish phenomenon Bingo Loco, Adam has over a decade of experience that has seen him support top acts like Tommy Tiernan, Rubberbandits, Ardal O’Hanlon, Seann Walsh, and many more.
This year he has performed at Cork Opera House, The Royal Theatre and The Telegraph Building and throughout the country on the most recognised comedy stages. Other acts for the weekend include Karl Spain, Colm O’Regan (“Deadpan with hilarious consequences” – Irish Times), Enya Martin (Giz a Laugh), The Two Johnnies, Emma Doran (The Daily Edge, FM104), Chris Kent (“Original hilarious material” – The Irish Mirror), Julie Jay (winner of Forbidden Fruit Comedy Search 2017), Joe Roone (Killinaskully), John Colleary (The Savage Eye) and Ross Brown (The Fear).