Jim Nolan and WIT collaborate to bring Una Troy’s work home
‘Directed by Jim Nolan’ is a quartet of words that’s guaranteed to put posteriors on Garter Lane seats.
And when there’s an added local ingredient involved, as is the case with ‘Mount Prospect’, which runs at Garter Lane until Saturday and if one has a grá for theatre, then one night of your week ahead has surely been locked down. Officially beginning its run this (Tuesday) evening, ‘Mount Prospect’ is Jim Nolan’s take on a play which author Una Troy adapted from her own novel of the same title, which was first staged at Dublin’s Abbey Theatre in 1940. “I’d a conversation many moons ago with Anna Manahan who told me about a movie she made way back – in the 50s – it was called ‘She Never Said No’,” the playwright (and Arts Council Theatre Artist in Residence) told The Munster Express.
“And she happened to remember, well, she had some vague memory, that the writer of the movie had a Waterford connection, so I did a little bit of nosing around and discovered that the writer was a woman called Una Troy. She’d written a novel called ‘We Are Seven’ and then adapted it into a screenplay, but both the novel and the movie were banned, and I was intrigued to discover her links to Bonmahon – she spent a lot of her childhood summers down there – her family had a house there. She later lived in Bonmahon for some time with her husband, a dispensary doctor called Joseph Walsh before his practice moved to Tipperary, but after Joseph died in 1969, Una returned to Osborne Terrace where she lived until her death in 1993.” 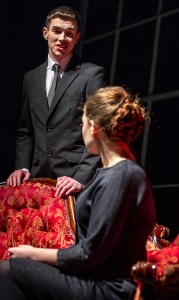 Jim continued: “But it was only when I moved to Kilmacthomas, with Bonmahon only down the road from me, that the name Una Troy truly became visible to me. Not too long after I’d moved to Kilmac, someone said to me, ‘sure you being a playwright, you must have heard about Una Troy, the novelist, she used to live here’. And I was intrigued to meet people who spoke of her as being their neighbour as opposed to her being a novelist. I got my hands on a copy of the film that Anna had been in – Ray McAnally was in it too – and while it was interesting to learn of the local connection, truthfully, it wasn’t until Una Kealy, the head of Theatre Studies at WIT suggested an Una Troy play, that her work really swung into focus for me.”
Jim added: “Like most work that’s done in one generation, it’s completely forgotten by the next so this play hasn’t been produced since it was staged and then revived in the Abbey – it was decently reviewed at the time – but then it went to sleep – but her local connection piqued my in my interest when Una (Kealy) mentioned ‘Mount Prospect’ as a potential production, and here we are now, waking it up again, so to speak.”
Described as “a savage critique of class prejudice and the position of unmarried women in 1930s Ireland,” ‘Mount Prospect’ stars Lorraine Murphy, Ema Lemon, Kieran Walsh and Alan Fitzgerald, with set, sound and graphic design commandeered by students from WIT’s School of Humanities and Department of Architecture.
Described by Jim Nolan as “an enormously courageous work”, ‘Mount Prospect’ is the story of Bridget Ellen Kennefick, a recently widowed woman who uses her husband’s will to advance her own son over the two children from her husband’s first marriage. 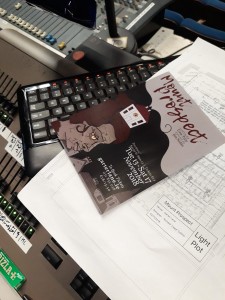 The director continued: “On a personal level, as a playwright, it was a real joy for me to revive the work of (Waterford-born) Teresa Deevy and to stage ‘Wife to James Whelan’ here in Waterford, where it had never been seen previously. ‘Blackwater Angel’ was a play of my own which opened in the Abbey and then went to London before being staged at Garter Lane and similarly with ‘Mount Prospect’, this was a play which debuted at the Abbey yet had never been revived since 1940 and therefore had never been staged before a Waterford audience; indeed none of Una Troy’s works have been staged locally so that’s both an honour and a challenge.”
Jim Nolan added: “And I feel it’s welcome and not before time that (the Fermoy-born and Clonmel-reared) Una Troy’s body of work, who established quite a reputation through the 1930s, 40s and 50s, may now be introduced to a new audience thanks to his revival, and I hope audiences will have a curiosity about ‘Mount Prospect’ and engage with it.
“In fact, the story is made all the more remarkable when you discover that Una Troy’s painfully honest dissection of the rigid class structure of small town Ireland was written, as it were, from the inside.”
Troy, whose father was a District Court Judge, in addition to her dispensary doctor husband, was ideally positioned when it came to critiquing the value system within the emerging Free State, “and how tight and unrelenting the class structure was”.
This narrative is driven through Mrs Kennefick’s character, who, in the wake of her husband’s death, shatters her children’s lives so as to maintain her family’s place in the local pecking order. Her character captures the hypocrisy which bubbled beneath the “respectable veneer” of 1930s Ireland, later manifested through a myriad of revelations. “If Troy’s integrity and courage are what have made working on the play such a privilege, it’s also been a particular satisfaction to bring the work of a Waterford playwright back to the stage,” said Jim Nolan. “From a staging point of view, it’s been quite a challenge, but it’s one I’ve really warmed to and been enthused by.”
Student involvement in ‘Mount Prospect’ is not restricted to set, sound and graphic design: both Megan Kelly and Laura Broderick are graduates of WIT’s Theatre Studies course while Alan Fitzgerald is a first year WIT Bachelor of Architecture (Hons) student.According to WIT Department of Agriculture Head Maire Henry: “We cherish he creative collaboration it enjoys with Garter Lane Arts Centre which is demonstrated through regular joint ventures and mutual support, including our bi-annual student competition to design a stage set for one of Garter Lane’s theatre productions. Architecture and theatre are two of the cornerstones of contemporary culture and we are proud to be part of this endeavour.”
The winners of the aforementioned competition were Bachelor of Architecture students, Wojtek Cymerys and Helene Fabbri (both Fourth Year), with fellow Fourth Year students Rose O’Hare and Aisling Finn named as runners-up. Said Garter Lane Arts Centre Executive Director Síle Penkert: “Coursework included poster design, set design and model box creation and sound design, these intrinsic elements are integral to the creation of an authentic theatre production experience and students across all the involved humanities departments responded and embraced the project with enthusiasm.”
The work of Una Troy features in an ongoing research project titled ‘Performing the Region: Performing Women’, which focuses on how 20th Century Irish female playwrights articulated women’s lived experience through theatre. “As a woman who came from a society which was, behind closed doors, frequently savage, for Una Troy to take on that underlying culture at the time as openly she did, to openly attack it in the manner she did, was incredibly brave,” said Jim Nolan. “As a writer, working on this play has been a revelation to me and a lot of what has driven me to re-introduce ‘Mount Prospect’ has been to bring local peoples’ attention to a writer who has been neglected for far too long and was ploughing quite a lonely furrow at the time. And I hope this might catalyse a re-awakening and lead to further explorations of Una Troy’s work both here in Waterford and further afield.”
‘Mount Prospect’ runs at Garter Lane until Saturday, November 17th. For bookings, call 051-855038 or visit www.garterlane.ie