On Saturday 25th January Foster Allen will bring their Timeless Memories Tour to the Theatre Royal, featuring tracks from 10 of their most popular and favourite albums. The story of Foster &Allen began back in the seventies when Mick and Tony were playing in Country Music bands around Ireland. In 1975 they got together a small group and went over to the U.K. to work the Irish music venues on a short tour. Mick and Tony had at this stage the idea of working together as a duo, playing ‘easy listening’ music with a touch of traditional Irish instrumentals. 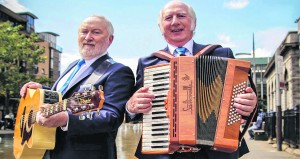 : Foster & Allen return to the Theatre Royal on January 25th

When their U.K. tour finished, they decided to let the band return to Ireland whilst they stayed behind to try out the ‘Duo’ on the public. They played several venues in the London area and the reaction was very favourable; so much so, they decided to remain as a duo and ‘Foster & Allen’ was formed. Foster & Allen aren’t showing any signs of slowing down and their touring commitments prove how popular they remain for their fans who like to see them in a live performance experience. Starts at 8 p.m. Tickets: €31 from Box Office 051 874402 or www.theatreroyal.ie