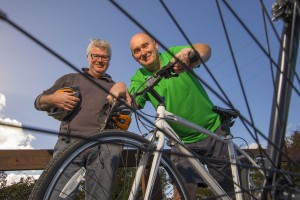 Chef Paul Flynn and Donal Jacob of Greenway Waterford Bike Hire on the Waterford Greenway, which is due to be formally opened by the end of March

Waterford’s Greenway will be formally opened to coincide with the anniversary of the last passenger service on the former rail line.
The period of March 25th to 27th 2017 is earmarked for the eagerly awaited formal opening of the ambitious project.
At the October plenary meeting of Waterford City & County Council, Cllr Pat Nugent (FG) asked if “stumbling blocks” to the Greenway’s progress had been overcome.
He said he looked forward to seeing the Greenway opened in its entirety.
Currently, Greenway users can travel on the Dungarvan to Kilmacthomas section of the route.
Delays have been experienced on a section of the Greenway in the Kilmeaden area due to a number of different factors.
In response to Cllr Nugent, CEO of Waterford City & County Council Michael Walsh said that March 25th – 27th has been earmarked for the formal opening of the Greenway.
He said this would coincide with the anniversary of the last passenger train along the route.
Meanwhile, an informal opening is scheduled to take place within the next five to six weeks.
In March 1967, the last passenger train left Dungarvan station for Rosslare.
However, the rail line reopened again with the opening of the Magnesite ore processing plant at Ballinacourty which closed in 1982.
Engineers ran occasional locomotives on the line up until 1990.