Brendan Cole brings his live stage show to Ireland
Brendan Cole’s mother introduced him to dancing at the age of six. “My mum made me do it,” the New Zealander cheerily admitted ahead of his ‘All Night Long’ tour arriving in Ireland at the end of this month.
“I didn’t walk up to my mum one day and say, ‘I’d love to go ballroom dancing’. That wasn’t the case. Mum wanted us to dance – my brother, sister and I – it was part of all the other stuff we did growing up. I played every single sport known to man; my passion will always be rugby – I wasn’t big enough or fast enough as a kid to be a good player – and dance was just something I did alongside all the other things I did growing up – but then, when you discover you’ve got a talent at something and you stick at it for many years, it just becomes part of what you do. I used to hang up my football boots at the end of each season and they didn’t come out of the cupboard until the following season whereas dance was just continuous and it never stopped. It still hasn’t!” 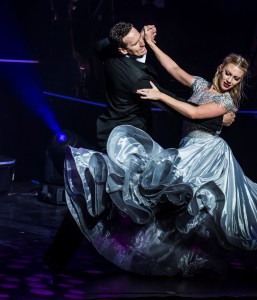 'All Night Long', starring and produced by Brendan Cole (pictured dancing with Faye Huddlestone), will play before packed Irish audiences at the end of the month, including a matinee and evening show at the Cork Opera House on March 27th.

Brendan, a well-known face in our living rooms thanks to his 13-year association with BBC’s ‘Strictly Come Dancing’ (which recently came to a close) is looking forward to bringing ‘All Night Long’ to the Cork Opera House on Tuesday, March 27th for matinee and evening performances.
“We’ve had a terrific run so far,” he continued. “We’re about halfway through our tour now and it’s been a pretty full-on schedule. The show itself is going brilliantly; in fact it couldn’t be going better. It’s the fourth show I’ve produced over the past 10 years, so I kinda know a little bit about what I’m doing when it comes to putting a show like this together by now! And we just have a ball on stage and the audiences have really warmed to what we’ve been doing, which is absolutely fantastic.”
So what should anyone travelling to Cork, Belfast (the Waterfront Theatre on the 28th and 29th) or Dublin (the Bord Gáis Energy Theatre on the 30th and 31st) expect from ‘All Night Long’?
“Well, they can expect what they want but they’re going to get something else!”, Brendan replied. “I try and give the audience everything they could possibly want, and then a bit more. It’s a variety show: there are 21 on-stage musicians and dancers so it’s a pretty big show. Musically, our band is just phenomenal – they play with Michael Bublé and Tom Jones – so to have them playing on my show is quite something.”
He added: “Then of course the dancing takes in what people know and love from ‘Strictly’ is brought to the stage, be it an Argentine Tango or something a bit more beautiful like a Viennese Waltz or Salsa, it’s all there. There’s also quite a lot of chat throughout the show. We take the mick out of ‘Strictly’, and out of Anton (du Beke) a wee bit too, but he’s one of my mates and I can do that – we just have a ball on stage. There’s a lot of mucking around and chit chatting in between the phenomenal dancing. And then you take the costumes the lighting and the incredible production values into account, it’s just a really good night’s entertainment.”
See This Week’s Encore Magazine for more and a chance to win a pair of tickets to the matinee
performance of ‘All Night Long’ at the Cork Opera House on March 27th!