Festival to honour Tramore filmmaker George Morrison
This year’s Imagine Arts Festival kicked off in Waterford on Thursday last (running through to this Sunday, October 28th), during which some 130 performances and events will be staged, showcasing film, drama, gallery work, the written word and music. Musically, Waterford will host some top internationally renowned acts during ‘Imagine’, including Seamus Fogarty, who led a night of folk music on Sunday night at St Patrick’s Gateway, which also featured the lyrical talents of Shane Barry. The John Dwyer Trad Weekend also ran over the weekend, featuring John Dwyer himself (at a concert also held at St Patrick’s Gateway), Sean Keane (of Chieftains fame) on the fiddle, Edel Fox on concertina and many more, while lively sessions were held over the weekend at Dooley’s Hotel, Tully’s, Jordan’s, Downes’s and The Reg.

This Thursday and Friday evening at Christchurch Cathedral (8pm; €18, €16 concession), the 10-piece street-funk band Stomptown Brass and the Collapsing Horse theatre group host a ‘Requiem For The Truth’, a Haitian Voodoo-inspired New Orleans jazz funeral, which will play off against the altogether more solemn obsequies of Catholicism. Christchurch will have never before hosted a sound explosion of this kind, so it’ll be well worth checking out. Downes’s will also host a ‘Vinyl Night’ on Friday from 10pm as part of the Vintners ‘Choons & Tales’ Trail which will run over the weekend (October 26th to 28th) at 22 bars across the city, featuring acts such as The Frank and Walters, Omega Three, Sleeze N’Cheese, Joe Meagher and Baya Salmon-Hawk.
Back in Christchurch on Saturday afternoon (2pm, free), Eric Sweeney will launch ‘Bright Seraphin’, a CD of his organ music played on the Cathedral’s Kenneth Jones Organ, featuring old and new tunes, in addition to some improvisation which will show off the range of sounds and colours of the city’s finest organ.
That evening (7.30pm, tickets: €20), also at Christchurch, the Hibernian Orchestra, conducted by John Finucane, will be joined by soloist Cormac Ó hAodáin and will present a programme of Richard Strauss’s Horn Concerto No 1, along with Beethoven’s Coriolan Overture and the spellbinding Seventh Symphony. On Saturday night at St Patrick’s Gateway (8pm; tickets €18, €16 concession), Terakaft (meaning ‘The Caravan), a Tuareg band from Mali (West Africa) will perform a desert rock cum blues set to an undoubtedly intrigued Waterford audience.
Meanwhile, this (Tuesday) afternoon and evening, the festival will pay tribute to Tramore-born filmmaker George Morrison (age 96), who blazed a trail during the 1950s and 60s during which he made ‘Mise Éire’, the first feature length Irish language film. 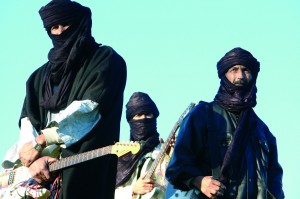 Terakaft bring their West African sound to St Patrick's Gateway this Saturday night, while the 10-piece Stomptown Brass will bring their New Orleans jazz stylings to Christchurch Cathedral this Thursday and Friday evening as part of the Imagine Festival.

Morrison, a member of Aosdána, and recipient of a 2009 IFTA Lifetime Contribution Award, will receive a Mayoral Reception at Tramore’s Coastguard Cultural Station today at 3pm.
This will be followed by the screening of three films at Garter Lane Arts Centre (all free), namely Morrison’s ‘These Stones Remain’ at 4.30pm, Ciarin Scott’s portrait of George Morrison, ‘Waiting For The Light’ at 5.45pm, which will be followed by a Q&A session featuring Ciarin Scott and George Morrison. The celebration of George Morrison’s career will conclude with the 7.30pm screening of ‘Mise Éire’, an epic production which traces the before and after of the 1916 Rising, scored magnificently by Sean Ó Riada. Said Festival Director Ollie Breslin: “We are delighted to honour and welcome George Morrison at the Imagine Arts Festival. His lifetime of work is tremendous, he was a pioneer in his field and he has captured and created a body of work which richly deserves honouring.” The Imagine Festival is a true Waterford treasure so please do your bit to support the efforts of Ollie and his colleagues between now and its conclusion.