Julie Power: On Tour with Gilbert and Sullivan Opera Company

Julie Power is no stranger to ‘treading the boards’. From the time she took her first tentative steps on stage as the ‘Artful Dodger’ in Oliver in 2006, Julie has played a variety of starring roles in a huge number of theatrical productions. Tonight (Tuesday) the very talented 22-year-old Waterford performer makes her debut with the chorus of the Gilbert & Sullivan Theatre Company in their production of ‘Pirates of Penzance’ in Buxton, Derbyshire. 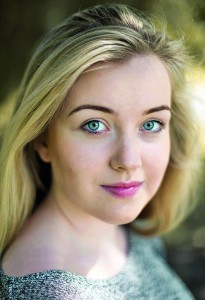 Tonight’s performance marks the beginning of a nine week tour with the company, taking in nine different venues all over England, performing not only ‘Pirates’ but other much loved Gilbert & Sullivan works such as Ruddigore, Iolanthe, Trial by Jury and the Sorcerer. During a short break from a hectic rehearsal schedule Julie explained to the Munster Express how she became involved in musical theatre. “I started with David Hennessy back in 2006 when he opened his stage school. I played the ‘Artful Dodger’ in the school’s production of Oliver and loved every minute of it. I just really enjoyed being on stage and was never happier than when I was performing.
Lauded for her portrayal of ‘Cosette’ in a youth production of ‘Les Miserables’, Julie played a huge variety of roles for various companies over the next few years and remembers those productions with fondness. “I played Gigi in ‘Miss Saigon’ with the South-Eastern Theatre Group in the Theatre Royal and Fantine in ‘Les Miserables’, also with the South-Eastern Theatre Group. Another one I really enjoyed was the part of Runt in the play ‘Disco Pigs’ with Loose Screw Theatre Company in Central Arts.”Julie moved to Dublin on completion of her Leaving Cert in 2014 and is currently studying for a Bachelor of Fine Arts in Musical Theatre at the American College, Dublin where she is due to graduate next summer.
The move to Dublin opened up fantastic chances for Julie and she made full use of the opportunities that came her way. “I got to play a Kit Kat Girl in ‘Cabaret’ which was with IMT (Irish Music Theatre) in the Helix, Dublin.Last year, we got the opportunity to go to Florida and perform the Rogers and Hammerstein revue ‘A Grand Night for Singing’ where I was a featured soloist.
I was lucky enough to get the chance to originate the role of Eva in the new Irish musical ‘Find You Way Home’. We did a workshop of the production in the Civic Theatre in Tallaght and then toured with it in Albany, Boston and New York City. (There are also exciting plans for this musical in the future!).
“The most recent production was with college to celebrate its 50th anniversary. It was called ‘Music Theatre Celebration’ and it showcased the music of the writing duos Kander and Ebb and Rogers and Hammerstein. This was in the National Concert Hall.”Julie also played the role of ‘Jill’ in last year’s pantomime at the Olympia Theatre opposite Rory Cowan (Mrs Brown’s Boys) and Ryan Andrews (Fair City) and thoroughly enjoyed the experience. “We had a great run which was extended into the middle of January. Pantomime is very different to everything else, anything can happen and very often does but it was lovely to perform in the Olympia Theatre and I hope to have the chance to perform there again.” 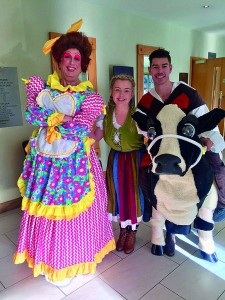 Earlier this year Julie auditioned for a role with the chorus of the Gilbert & Sullivan Opera Company and was delighted to be offered a part. “It was fantastic, I was able to audition in Dublin which was brilliant. Vivian Coates, who is directing both Ruddigore and Iolante, came to Dublin to hear me sing. He seemed happy and I guess the producers trusted his judgement because here I am!.”
Julie started rehearsing in London three weeks ago and admits it has been absolutely hectic since. “We rehearse every day and it’s really full on. We get Sundays off so thankfully there’s a bit of a break at the end of the week. There’s only ten of us in the women’s chorus so you really have to know your stuff. Before I even came over to start rehearsals I had to have all of the scores off by heart, and if you know G&S, that is a LOT of words. Having a small chorus is great though because we get to establish ourselves more as individual characters rather than just blending in the background.”
Rehearsing one production at a time is a challenge in itself but learning and rehearsing five Gilbert & Sullivan works is a daunting prospect but according to Julie the cast are more than up to it.
“It’s a bit hectic alright. We basically do a show a week. We work pretty much non-stop from 10:00 to 6:00pmevery day. We rehearsed our third show last and the fourth show ‘Trial by Jury’, which is a one-act show, was worked on last weekend. We will rehearse our fifth show ‘Iolanthe’ while we’re on our first leg of the tour in Buxton!. It’s a huge amount of learning and rehearsing but the people I am working with are fantastic and it’s all coming together.”While Gilbert & Sullivan is a new departure for Julie, she has enjoyed the challenge and nominates ‘The Sorcerer’ as her favourite of the five shows. “I’m really enjoying ‘The Sorcerer’ mainly because we are doing a more updated version of it. It’s set in a community centre and we all get to play the different members in the community (think Vicar of Dibley).
It’s really fun because every single character is so different and they’re all quite complex too. I get to play an old woman in a tweed jacket so it’s definitely something different! It’s refreshing to see it take a more modern turn since G&S would usually be performed in a more traditional setting. It proves that opera can be fun and relatable for modern audiences.
There’ll be no chance for Julie to rest on her laurels when the run finishes on October 3rd. There is of course fourth year to get through in college and an outing with the Rathmines and Rathgar Musical Society in November that she’s really looking forward to. “I will be playing Julie Jordan in the R & R’s production of ‘Carousel’ in the National Concert Hall in November, which I am really excited about. We will also have a few productions coming up for final year in college so I’m sure it will be another action packed year but being busy is the only way to be when theatre is what you do.!”