Lusmore, Lily, Doire and the Ollpheistha returns to the Royal
“An apprentice sword-maker to Fionn MacCumhaill, a blind piper on the run in 1600s Penal Ireland, a young writer from Waterford in 2017, a 2000-year-old tree, a three-headed sea-serpent and the Goddess of the Earth…an incredible adventure across time…”
The rehearsal room at St Paul’s Boys School was buzzing on Friday morning last, just hours before the Ben Hennessy-created stage for Little Red Kettle’s (LRK) latest production was disassembled and destined for the Theatre Royal. The company’s latest fantastical offering, ‘Lusmore, Lily, Doire and the Ollpheistha’, created by Ben Hennessy and Liam Meagher and first staged back in 1999, will take up residence on The Mall from Wednesday through to Saturday, and the 50-plus cast cannot wait for the run to kick off.
“This is my third year,” said cast member Charlie Maher, as he and fellow performer Alison Hutchinson excitedly spoke about the production and the theatre group they’re so pleased to be party to.
“I just keep coming back! I can’t seem to stop. It’s ridiculous, but in the most fun way possible. I love it so much I just have to come back.” Charlie’s interest in LRK was piqued by “a crazy bearded guy named Ben came into my class and said: ‘Hey guys, do you want to do some acting and have a pizza party and a water fight’ and that’s what happened. I was sold straight away.”
Alison, who is in her second year with LRK, added: “It’s just so much fun. I had to come back. We’ve rehearsed from 10am to 5pm for the last four or five weeks, and it’s going really well, I think! But it’s gone by so fast – you just want to have more time here because it’s so much fun.” 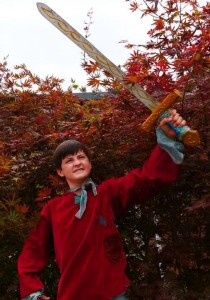 As for the production itself, Alison explained: “This play is all about keeping stories alive, and the three main characters, Lusmore, Lily and Doire, tell the Fionn MacCumhaill story to the Gods in different ways, writing poems and songs and making sculptures, and it’s all very exciting and enjoyable.” Getting direction from both Bens (Hennessy and Quinlan) on the set during rehearsals has been enormous helpful, according to Charlie. “It’s brilliant to have it before we go down to the theatre. If we didn’t have it before we go there, it wouldn’t have felt like we were on the stage at all, but being on the set makes us all feel like we’re actually there and you get to experience what your character is doing and who they are, in that moment in time.” 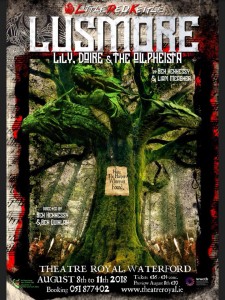 Ben Quinlan, who first entered the LRK universe at the age of nine, described youth theatre as “sport for those who never got to play it – it’s a different type of team sport composed of different individuals who take responsibility for the bit that they have to carry – and for me, as a drama facilitator, that’s pretty much the most important element of it for me. They’re all coming on board here to do a play but more than that, it’s all about each of them taking their own responsibility and then creating something together…and this one of the really good ones. It’s become a different thing, a being of its own, with a different cast and the lads have injected their own personality and energy into this production. It’s become theirs and that’s the most important and magical thing about seeing a mad bunch of kids from Waterford, aged between 9 and 13, coming together and making something – and it’s just theirs. And after today (Friday), our last day of rehearsals, it’s completely in their hands and I’ll take a step back, head for the Gods and start pulling my beard out! Being involved in something like this, having looked up to both Ben (Hennessy) and Liam (Meagher) and deciding that what they were doing was what I wanted to do when I grew up, well it’s just dream come true stuff for me. I’m exactly where I want to be right now, and that feels pretty good.”

This wonderfully devised production will run at the Theatre Royal from Wednesday, August 8th to Saturday, August 11th. Tickets are priced €16 (Thursday to Saturday; Concession: €14, Family of four: €40 while the Wednesday preview is €10). For bookings, visit www.theatreroyal.ie.