Michael Fewer on the Atlantic Fringe 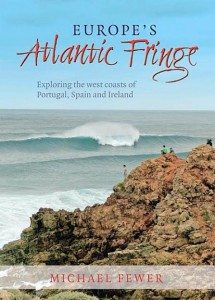 Michael Fewer, a well-known Waterford author and travel writer, has just launched a book on his travels, titled ‘Europe’s Atlantic Fringe – Exploring the West Coasts of Portugal, Spain and Ireland’.
Michael, who hails from just outside Waterford city, is the narrative of his exploration of the west coasts of the three aforementioned countries, describing the people and places of the ‘Atlantic edge’ and the oceanic heritage that links them.
Published by Ashfield Press, the book makes reference to the Grants in the 1400s at a time when there was a great shipping rivalry between Waterford and Baltimore in West Cork. Shipping was attacked in Baltimore when sheltering from a storm, during which goods were stolen and people were ransomed. Latterly, Waterford traders would organise a naval force to attack the O’Driscolls’ Castle in Baltimore and burn it, laying waste to the town.
Pierce Dobbyn brought a fleet from Waterford to free the Waterford trader and prisoner William Grant, owner of the vessel The Santa Maria, from which some cargo was recovered. He was freed after a second raid that involved the fleet and 400 armed men in 1413. The castle, friary and village of Sherkin Island was also destroyed and stores were also looted.
Baltimore later earned infamy in 1631 when it was sacked by Barbary pirates.
Michael, who has now written over 20 books, also writes about the once extensive wine trade Waterford enjoyed with Portugal and North West Spain.
Even then, many Irish pilgrims travelled from Ireland to pay their respects at the grave of Saint James in Santiago De Compestella, a trek now known the world over as the Camino.
Sir James Rice, who served as Mayor of Waterford Mayor (whose house on High Street later became the Wine Vaults) undertook this journey in both 1473 and 1483.
During the Napoleonic Wars (1803-1815), Britain and France did battle over the Galician city of A Corunna, which is also well referenced. This came to prominence as a destination port for General Eoin O’Duffy (a former Garda Commissioner who briefly served as Fine Gael leader) during the Spanish Civil War, when 700 Franco-supporting men left Galway in a German freighter, the SS Urundi in December 1936.
Michael details some of their time in Spain, where many hated the food and drank too much wine; few fought well and were seen as difficult to manage.
Some died fighting for Franco but most returned home without fanfare, suffering defeats to the Socialist armies and Government forces in 1937.
The recent May Dav event in Waterford honoured a dozen local men who fought against Franco for the Republicans.
The author clearly conducted great background work into the Napoleonic invasion when it comes to Spain and Portugal. He has visited many of the places referenced in his book, such as A Corunna where the Meath-born Duke of Wellington led British forces. He also refers to the Celtic presence in Iberia long before they arrived in Ireland, and to this day, many Portuguese have some Irish traits.
In terms of the book as travelogue, Michael Fewer gives some good tips on places to visit throughout Portugal and Spain, such as Cape Saint Vincent in south east Algarve, the Alentejo wine area between there and Lisbon, as well as the capital itself, along with Oporto and the country’s great wine trade.
Lovely Galicia also gets a good mention as does the Camino, with the author writing about his meeting pilgrims whom he met in Santiago and he provides a great review of that wonderful pilgrimage and its extraordinary atmosphere.
His native Ireland is well covered, and details some of the darker episodes of our history, be it the Famine, Cromwell’s reign and Kinsale’s varied and eventful past.
He also writes about Wolfe Tone’s invasion, the War of Independence, West Cork’s Flying Columns, and takes us to some of West Cork’s beautiful villages, such as Castletownshend.
Michael tours the Irish Atlantic West and retells well-known stories (Roger Casement, the gun-running at Banna Strand and his subsequent arrest and hanging) and some lesser known tales have some light shed on them.
The Clare coastline, and Foynes’ flying boats (the forerunner to Shannon Airport) are also recalled, as are other aviation feats, including Alcock and Browne’s landing at Clifden in 1919, following the first successful transatlantic flight, having taken off from St John, Newfoundland, an area with many Waterford links.
Mayo’s Pirate Queen, Grace O’Malley (Gráinne Mhaol), the Spanish Armada and the Shell Corrib Gas Field saga are all recalled, with the Armada links underlining the centuries-old links between Ireland’s west and Iberia.
Poet WB Yeats and his Sligo connection, as well as the late Lord Louis Mountbatten, killed by the IRA at Mullaghmore in 1979, is also detailed. The shock of that day has not been forgotten by this writer; that very day we travelled to the UK by ferry and later felt the palpable shock generated by the one of the conflict’s most high-profile murders.
A great deal of the detail recalled many history lessons from school and it’s certainly well worth reading.
Glencolmcille, the Donegal Gaeltacht and the fantastic coastline are reviewed and compared with south west Portugal and Cape St Vincent in a book which makes for a fine bedside companion. However, perhaps some information about what one can do in some of the towns referenced might have made a good read even better.
As the promotional literature notes: “Although ten EU countries have an Atlantic coastline, only three, Portugal, Spain and Ireland, extend significantly into the Atlantic Ocean. From Cape St Vincent in Southern Portugal to Horn Head in northwest Ireland, Fewer writes about the people as they are today, the rich historic and prehistoric heritages that link them, their shared pasts, their similarities and their differences.” All in all, Michael Fewer’s latest book is a fine read and is well worth a perusal.