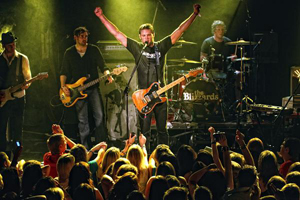 A storming night of live music hits the South East on Sunday 28th December as The Blizzards return to Electric Avenue as part of an End Of Year mini-tour of their favourite Irish venues.

Their sold out show at The Avenue in September was one of the gig highlights of the year, and Bresy and the Boys are bound to be in even better form for this one after the double platinum success of new album “The Domino Effect”. Tickets are available now at BPM Records and Ticketmaster.

The Blizzards are the best live act in Ireland. The 2008 Meteor Awards said so and most of the 50,000 people that saw their main stage appearance at this year’s Oxegen Festival would agree. The band need no introduction as their profile has soared since the release of their No. 4 platinum selling album, “A Public Display of Affection”. Songs such as “Trouble”, “Fantasy” and “Miss Fantasia Preaches” became instant chart hits. ‘Trust Me I’m A Doctor’, the lead single from second album “The Domino Effect” has been the most played track on Irish Radio over the last few months with it’s trademark blend of punk, ska and pop, administered with an unnerving blow of energy, so often absent in modern day pop records.

New single “The Reason” has just been released to universal acclaim and there are high hopes that The Blizzards are going to make that all important International breakthrough in 2009. In the meantime get down to see The Blizzards on Sunday 28th December. It’s gonna be ELECTRIC !