The Spring/Summer Season at the Theatre Royal was launched on Thursday night at Waterford Chamber’s first Business After Hours of 2018.
Welcoming a large gathering of business people and theatre enthusiasts to the Theatre Royal stage, Waterford Chamber President Paul Nolan said: “We are delighted to be here this evening for the launch of the new season here in this magnificent historical building. There is an action packed season ahead and I look forward to enjoying a number of evenings here in the coming months.” 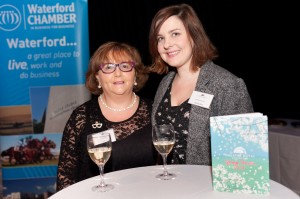 Mr Nolan went on to say that being relevant to the membership was a key goal for Waterford Chamber and projects like the Regional Leaders Programme, Toys4Engineers and the new Marketing Meet-up were designed to do just that. He also encouraged members to get involved where they could and inputs into the progression of Waterford Chamber were always welcome. 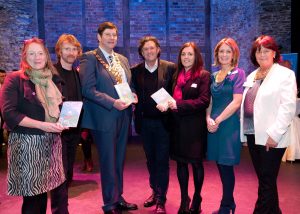 Guests were treated to delicious food, music and a dramatic performance from King Lear by well-known local actor Michael Quinlan. Meanwhile Chairperson of the Board of the Theatre Royal Anne Marie Caulfield outlined the corporate benefits to becoming a Friend of the Theatre Royal as well as the many opportunities the venue presents for businesses.

Commenting on the event, Theatre Royal Artistic Director Ben Barnes said: “A rich and vibrant arts culture is at the heart of the development of our City and Region. Partnering with Waterford Chamber for their first Business After Hours in 2018 allows us the opportunity to bring the diverse offering which Theatre Royal provides to the Chamber members and a wider audience.”
Waterford Chamber’s next Business After Hours takes place on Thursday, February 15th in the Solas Centre. Book online now for free at www.waterfordchamber.ie