Night of a thousand stars 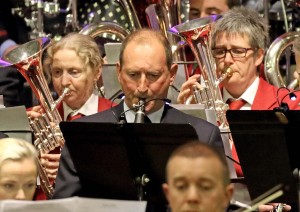 The 120-strong group of musicians made the annual Waterford Massed Band Concert another night to remember at the Sacred Heart Church, The Folly on Friday last.

“We’ve lost some wonderful talent in our city over the past year or so – Bryan Flynn and Denny Corcoran, and this community lost a wonderful man in Father Sean Melody – but I think all three would have been delighted to see our City of Music living up to its name so brilliantly.”
Those were the thoughts of Waterford Massed Band Concert Organiser and all round force of nature Ger O’Brien, reflecting on last Friday’s concert, which drew a thousand-strong audience to the Sacred Heart Church on The Folly.
“We were absolutely thrilled that the night proved such a success, but it would be never be a success without the support we receive from the audience, the people of Waterford, the local media, including The Munster Express, and our entirely voluntary team, be it our musicians, singers David Flynn and Donna Roche, and everyone who made the night possible, from ticket vendors to programme sellers, to our car park attendants – everyone.
“And we’re so grateful to all who gave us even a minute of their time since we first sat down to plan the concert back in mid-January.”
Among the highlights of the night was the honorary appointment of Steve Walsh (MBE) of Royal Edinburgh Tattoo fame, who was named as Massed Band Concert Life President.
Said Ger: “We were thrilled to have Steve in our company, and he was genuinely taken aback by the honour; he got quite emotional about it. When a man of his esteem and experience takes and interest and maintains an interest in what this event is all about, that’s very validating – and it’s something I’m very proud about.
“And to have him under our tent so to speak, well that’s absolutely fantastic. There are new inroads which our association with Steve can lead to and it all bodes well for the future of our concert.”
Meanwhile, a Lifetime Achievement Award was also presented on the night to Brother Finbarr O’Keeffe of De La Salle.
“Brother Finbarr gave a lot of years in both Stephen Street and St Declan’s,” said Ger. “And over the years, he has been a tremendous support and counsel to countless numbers of people and we felt it was only appropriate to honour him. He was thrilled to be honoured and it was lovely to see his reaction when the announcement was made.
“We’ve a lot of great people in Waterford, and it’s a pleasure to get to acknowledge people such as Brother Finbarr. We’re blessed to live among people of his ilk.”
Friday last, amidst the beautiful arrangements and stunning performances of both singers, was also a time to recall those no longer with us. And this prompted Ger and the organising team to dedicate the concert to the memory of the late Fr Sean Melody, a much loved cleric in this part of the city for so many years.
“His family expressed their gratitude for that afterwards,” Ger O’Brien added. “We didn’t announce it until the concert night itself, as we didn’t want to give the impression that we were trading on the currency of Fr Sean’s memory.
“But given his passing, given his support of the concert down through the years and given that this concert has made its home in the parish he served so well, we felt it was right and appropriate to dedicate the concert to him. He lives on in many of our hearts and he’ll never be forgotten.”
The Massed Band is composed of local musicians drawn from City of Waterford Brass, the Barrack Street Band, De La Salle Scout Pipe Band,. the Thomas Francis Meagher Fife & Drum Band, along with members of the Waterford String Ensemble.
The Massed Band’s ethos is to raise money for local charities “so the money we raise will stay in the community”.
This year’s beneficiaries are the Bonmahon RNLI Inshore Lifeboat and Lifeguards, the Waterford & South Kilkenny Branch of Down Syndrome Ireland and the Waterford Area Stroke Club.
“We received 18 different letters seeking donations this year, and that tells you something about things in the city at this moment in time,” said Ger.
“And we’re delighted to be in a position to help this year’s chosen causes, as all three provide incredible service within our local communities.”
The presentation of cheques to all three shall take place in the Mayor’s Parlour in mid-November during a well-merited Civic Reception. Congratulations to Ger O’Brien on another fantastic concert!