PANTO fun returned to Kill once again this April with the staging of the hugely entertaining ‘Cinderella…ish’ at the Gealach Gorm Theatre.
The production was staged to full-houses for five separate performances from Thursday evening April 11th to Sunday evening April 14th which included a Sunday matinee.
With Martha Cleary as Cinderella, Killian Power and Jack Walshe as the Ugly Sisters, Pat Dunphy as the Stepmother, and a whole host of talented adults and children, ‘Cinderella…ish’ had audiences chuckling and hollering throughout. The story merged the traditional and much-loved classic tale of Cinderella with some newer dimensions such as the visit by the Prince of Kurkinstan to the local school.
Additionally, the ‘Cinderella…ish’ script, which was written by members of the multi-talented cast, was interspersed with mentions of local people and place names. 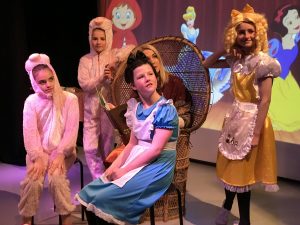 The use of a high-quality projector brought a multimedia dimension to the production and helped establish different scenes without the need for an extensive turnaround on stage. This impressive and innovative use of multimedia allowed for previously filmed outside footage to be broadcast in-house. The pantomime brilliantly showcased the vast amount of talent which exists in this area of Mid County Waterford.Staging such an ambitious project requires the assistance of many more people back stage who all contributed in their own way to ensuring this production was such a success. The production was a true community effort, with many different people lending their expertise and helping in whatever way they could from ticket sales to serving refreshments during the interval.‘Cinderella…ish’ provided an important opportunity for the personal development of local children and its success is testament to the hard work and commitment by Angela Mulcahy and all the team involved in another production at a venue which has become a theatrical and cultural hub.