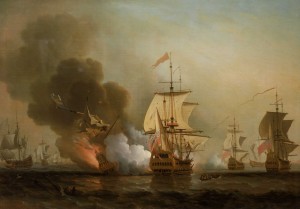 Piracy was not nearly as glamorous as what movies have portrayed it but it is a fascinating area of research.