Slieverue woman Áine Coady has carved out a niche for herself in Canada. As director of the Vancouver Irish Film Festival, she is responsible for bringing the best of Irish cinema to the city, which has become a destination for Irish emigrants in recent years. “The Irish are known as a nation of storytellers and we are delighted to be able to introduce Canadian audiences to the best of Irish storytelling through the medium of cinema,” she says.She founded the festival a year ago and is just off the back of a manic second iteration held the weekend of November 29th to December 1st. 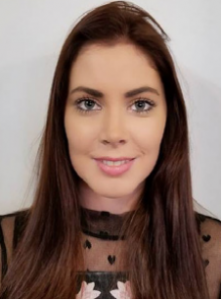 South Kilkenny woman Áine Coady has been living in Vancouver since March 2018.

It served up some highly regarded films from these shores including an acclaimed comedy-horror, Irish language work and a classic family feature. Originally from Ballinlaw, Slieverue, Co. Kilkenny Áine attended the Mercy Secondary School in Waterford city, and completed a BA Hons in UCC and a Masters in Film at Filmbase, Dublin.She got her first experience of the craft locally through her involvement in Waterford Youth Arts while she also volunteered with Spraoi for a number of years.
She has since worked as Production Assistant and Assistant Director for programmes on TV3 and BBC, and, following her receipt of a 2 year Canadian working visa, she has even been employed as personal assistant to Hollywood actress Katie Holmes.”I lived in Victoria at the time and it was for the making of a horror called The Boy II. It’s set to come out in 2020 and I have to say it was a great experience,” she said.
In between her own film work for companies like Disney or Netflix, Áine imagined bringing the talent of the whole Irish film industry to audiences in Canada. Last year she launched the inaugural Vancouver Irish Film festival and sold out screenings of award winning Irish features such as “Michael Inside” and “the Drummer and the Keeper.”This year Áine has returned with an even larger Vancouver Irish Film festival, and is bringing a three day festival to the Vancity Theatre, Vancouver.
The festival will kick off with a sold out Gala Reception featuring an Irish Trad session, Jameson and Taytos, followed by a screening of critically acclaimed movie “A Bump Along the Way”. Other highlights of the three day festival include the “Oscars Shorts Programme”, a screening of eight short movies that have been nominated for Academy Awards in the last decade.“Through VIRFF, Canadians can enjoy a more fulsome and authentic taste of Irish culture than they experience on St Patrick’s Day,” says Áine. 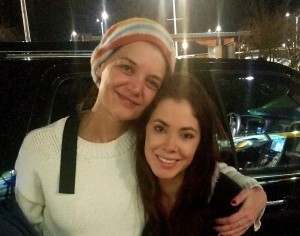 Áine Coady and Katie Holmes - Áine worked as a personal assistant to the Hollywood actress for horror film Brahms: The Boy II

“We hope our schedule of programming appeals not only to the growing Irish community in Vancouver but also to a broader audience. Word travels fast in Vancouver among the Irish community so it’s always sold out fast.”Films shown at last year’s festival included the 1994 childhood classic ‘War of the Buttons’ which went down well with adults and kids alike.
“Something like that becomes part of their culture and it was a dose of nostalgia for me too, plus for the ex-pats who came to live here in the ’80s and the ’90s. The festival was designed to be fairly inter-generational.”The Irish population in BC has grown exponentially over the last decade with 4.5 million Canadians claiming some or full Irish lineage in the most recent census and more than 675,000 British Columbians self-identified as being of Irish descent in 2016, according to Statistics Canada data.
To meet the needs of the growing Irish diaspora a second Consulate Office opened last year in Vancouver. For Áine, there are no immediate plans to return to Ireland: “There’s such big opportunities and it is called ‘North Hollywood’ for a reason. They also say that there’s at least one Irish person on every set over here. “I also really like the lifestyle here – I’m gearing up for ski season at the moment.” She added that fingers are crossed that she acquires permanent residency after her visa is up in March.
“We were really lucky to receive an emigrant support grant from the Irish Government for this year’s festival,” she added. The 2018 VIRFF received support from the Consulate General of Ireland. This year the festival has also received funding from the Emigrant Support Programme (ESP), from the Irish Abroad Unit within Ireland’s Department of Foreign Affairs and Trade.
ESP funding is awarded to not-for-profit projects intended to strengthen the international Irish community and promote and maintain Irish heritage and identity overseas.
Áine and her committee of dedicated Irish volunteers have succeeded in putting the South East, and Ireland and herself on the map in Vancouver and no doubt bigger projects await.