Home » Entertainment » Events » Spraoi 2018 set to be another spectacular festival

Spraoi 2018 set to be another spectacular festival 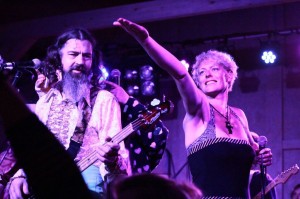 Speakers at the event included Mayor of Waterford City and County Cllr. Declan
Doocey, Spraoi Chairman Jamie Dower, Andy Crowley of TEVA and Spraoi Artistic
Director Mike Leahy.
Mayor Doocey told guests: “The festival is part of what we are in Waterford. It
expresses all that is positive about our county: talent, energy, community and
international outlook. The members and management at Waterford City and County
Council are firm supporters of Spraoi – because we recognise that for every Euro we
invest – thousands of Euros are generated for local business. Spraoi is a Waterford
success story. The studios here are testament to this company being a national
leader and brand in their sector.”
In what is now the 26th year of Spraoi, the theme of the festival is bugs and in the studios some special bugs were being created and people invited could see some of the work of the team and volunteers.
Andy Crowley of Teva spoke on behalf of sponsors on the theme of creativity. It is
about a new way of thinking and Teva as a firm uses creativity in its research
department as a core value and that science can link with creativity. Artists and
volunteers with Spraoi can be like scientists too doing new things and developing
ideas. Creativity is a mind set, a problem can be an opportunity and creativity can
also be contagious, as Andy quoted Albert Einstein.
In reference to Spraoi, he said it can help develop Waterford culturally and make it
more attractive for people to work and visit, in that the Spraoi festival can be a shop front for
Artists. MC Jamie Dower touched on how all arts are local and introduced festival
director, Mike Leahy, Mike spoke about the many international acts
They come from the UK, Holland, France, Belgium, Slovenia, Catalonia/Spain,
Germany and even Canada .
Some new shows will be premiered in Ireland at Spraoi and may go elsewhere.
Other festival directors form Europe are coming to see Spraoi and may sign up some
acts and also give their views on the Spraoi festival. This is a great innovation and will surely mean more backing from the Arts Council going forward.
Tribute was paid to the many volunteers and young people joining Spraoi over the
summer holidays and Mike says they enjoy putting them to work and giving them
direction and a liking for the arts. They are delighted to have so many to help them
with the great amount of work, building various models for the bug theme. They are
fortunate to have so many local youth involved.
The launch was also attended by Municipal Mayor Joe Kelly and a large contingent
of public representatives. The Arts Council was also represented as were many of
the festival’s sponsors.
Items being constructed for this year’s festival parade Bugs were on display. This
year’s festival features acts form an array of European countries and there will be
over 250 free performances available to the public. Featured attractions include
SprÓg Children’s Festival presented by Garter Lane.
Along with street arts performances Spraoi will present an extensive and diverse
music programme, with outdoor concerts at John Robert’s Square and the Apple
Market, along with gigs in pubs and hotels as part of the Hop House 13 Rhythm
Route.
Speaking to The Munster Express at the launch, Spraoi Director T.V. Honan said:
“It’s a cliché to claim we have something for everyone, but we really have. For three
days Waterford’s ancient streets will be an imaginative playground and with all
events free Spraoi provides unparalleled access to the arts.”
The Spraoi Festival printed programme will be widely circulated to retail and
hospitality outlets throughout Waterford this week and it will also be available in other
south-eastern counties. For further details see: www.spraoi.com or Spraoi social
media platforms.