The Belleford's Rockabilly Sound from Ferrybank

Following a great gig at Tramore’s Raglan Road in January, Ferrybank-based Rockabilly band The Bellefords are going down a treat with audiences far and wide, across a range of festivals. Ann Cullen of The Bellefords was in touch to fill us in on the Rockabilly scene in the South East
Their band includes Ann Cullen; Paula Marks and Jenny Cullen who are the singers of both harmony and solo songs.
The band members are: Kieran O’Halloran Drums; Jimmy Shields; Bass Guitar; Rory Jackman Lead Guitar and Sinead Haze Rythm Guitar.
Kieran and Jimmy are both members of an extremely popular Rockabilly band called TomCat and the Zodiacs, Rory is a member of a hard rock metal band One Shot Kill and Sinead is a solo artist who sings and plays guitar at weddings and gigs.
Jenny has been a member of Choirs and musical societies in Waterford since a small child and has performed in the De La Salle production of the Hot Mikado as Peep Bo and later in South East Musical Society’s Les Miserables. 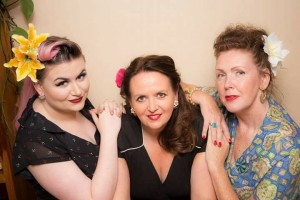 Paula and Ann have both been on the Rockabilly scene in Ireland and the UK for over 30 years their love of the scene, which is a whole lifestyle with its music; bands and clothes, takes them to festivals all around the country and overseas which led to them seeing a place for a female fronted rockabilly band.
Their songs are 40″s and 50s era inspired and they try to keep to the original sound and style whilst bringing an edge to the songs
They all sing solo songs and our covers include rocking sounds of Wanda Jackson and Janis Martin; Bluesy ballads of Etta James and Julie London to name a few.
The band launched in September with a charity gig in the Rising Sun in Mullinavat and saw people travel from as far as Belleek, Dublin, Carlow, Enniscorthy, Kilkenny and Limerick and the band were delighted to hand over a cheque for €1293 to Chernobyl Aid Ireland. The dance floor was full all night and they look forward to another charity gig later in the year.They have sung in Wales at the Welsh Rockabilly fair fringe festival, we sang with the fabulous Jive Aces, Tomcat and the Zodiacs and Joe Fury and the Hayride and a Christmas gig in Toss Kavanaghs, Enniscorthy.They are currently taking bookings for 2018 and have a couple of gigs being arranged at the moment for festivals, details to be confirmed, one such gig just confirmed is to join the Jives Aces at the opening of the Derry Jazz Festival in May.
The Rockin scene is extremely popular in Ireland and until the Grand Hotel closed its doors an annual weekend gig was building a huge following in Tramore. It is an event that is truly missed in Waterford.Dublin, Enniscorthy and Belfast all have regular events and in the South East Enniscorthy is known as Rock and Roll Town. Each August Bank Holiday there is a Rock and Roll Weekender in conjunction with the Food Festival which is known as the Rockin Food Festival there will be many bands performing throughout the days and nights with the main performances each night in the IFA Centre. 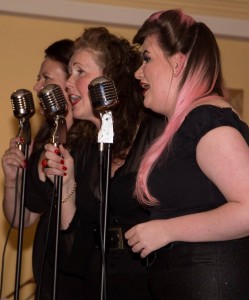 Some upcoming events include: Enniscorthy IFA Centre 17th February Gavin Povey Easter Sunday 1st April 2 bands The Revolutionaires and The Runnawayz A Rockin, Dublin Event, also in The Carrickdale Hotel Dundalk: 2 nights of Rockin Music with The Doel Brothers; The Jive Cats and the Chord Royals.As well as the festivals in Ireland the UK and Europe and USA all have great events, we are just back from the Rockin Race Jambouree in Torremolinos, Spain, a truly international event, with some great musicians over 5 days and nights in venues around the beach strip, town centre and the nightly venue the Auditorio Principe De Asurias , where up to 5000 people enjoyed bands from all the different genres of Rockin’ Music including some famous artists from the past.
The Bellefords are a relatively new band to the Waterford scene, but are delighted to have been so warmly welcomed by everyone and look forward to singing at many more gigs in the future.For further information on The Bellefords, contact Ann Cullen at 087-6559729