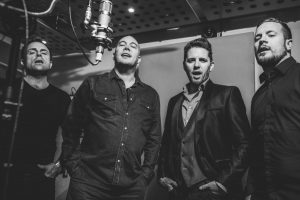 Almost 10 years ago, four Irish singers, performers and songwriters decided to take a calculated risk.
The constituent parts of The High Kings – Finbarr Clancy, Brian Dunphy and Darren Holden – each with a wealth of history in the music business behind them, knew that in order to maintain any level of creative interest they would have to boldly go where no other Irish ballad group had gone before.
The four members immediately knew that something special was taking place and within months had clicked as a creative unit as well as friends.
The self-titled debut album, released in 2008, reached a highly impressive number two on Billboard Magazine’s World Music chart.
It was during The High Kings second tour of the US in 2011, however – having graduated from playing small venues to larger halls as they promoted their follow-up album, ‘Memory Lane’, which also crashed into Billboard’s World Music chart – that everyone involved realised the fan base was growing into something that no one had predicted.
As if that wasn’t good enough, The High Kings received the stamp of approval from the likes of Christy Moore and, perhaps more pertinently, Ronnie Drew, the lead singer of The Dubliners, and the man behind one of Ireland’s most recognisable and enduring ballad voices. The High Kings had achieved what many had thought improbable, if not impossible: they were moving the Irish ballad tradition into the here and now, carrying along with them the steadfast older fans while simultaneously bringing it to a new audience. “The gigs were getting bigger and bigger, and we felt we were breaking down barriers.”
To say that The High Kings are charting a new course for Irish ballad music – equal parts rousing and reflective, energetic and insightful – is an understatement.
They are, essentially, marking out a new and bright era for Irish folk music, and aiming to bring a broad demographic along for the journey. The High Kings have vowed to continue for another decade following the departure of Martin Furey last August, and their first ‘Best Of’ collection ‘Decade’ was released last November ahead of their 18-month World Tour.Time to move on, then? “Full steam ahead!”
The High Kings will perform at Waterford’s Theatre Royal this Thursday, January 11th from t 8pm.
Tickets priced €28:50 are available from the Box Office on 051-874402 or online at www.theatreroyal.ie.