“Eddie Keher called him a legend of hurling. Jack O’Neill, a Waterford local historian, called him a great man.”
These lines open David Smith’s illuminating biography of John Keane, the story of arguably Waterford’s greatest ever hurler, which also deals with how his talent and personality imbued not only Waterford sport, but local culture and society.

David Smith, the maternal nephew of John Keane, published ‘The Unconquerable Keane: John Keane and the Rise of Waterford Hurling’ in 2010.
This outstanding story has sold out all hard copies since, and now on the 100th anniversary of John’s birth, local author David Smith has decided to publish this book for free online.

Growing up, he “was just my uncle” says Smith, of the man who chatted to his mother by the fireside.
“When I got older I realised just how important he was in social, cultural and sporting life of Waterford…You might be walking down town and you would see John, with a flock of young fellas behind him, just because he was John Keane. He was the most famous man in Waterford…some say he was the greatest hurler of all time… But he’s the forgotten man of hurling now (so) one of the reasons I wrote the book was to resurrect him”
Smith spent two years researching the figure of Keane, drawing on his own memories, accounts of Keane’s contemporaries, as well as every news article or match programme of the period.

The book divides itself between Keane’s county career and club career, his prolific success as a Waterford hurler, a Mount Sion champion and a manager of the county’s greatest team from 1957-1963.
Amazingly, Smith has managed to chronicle every known outing of Keane’s from his debut at just 13 to his last performance in 1955. With fascinating clashes and friendships with greats such as Christy Ring or Jack Lynch detailed, the story of John unfolds as a gripping account of the transcendence of Waterford hurling from 1930-1960. 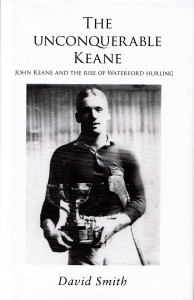 Moreover, in covering a period of great turmoil for the county (and the nation) Smith cleverly presents Keane’s story as a commentary on the social and economic difficulties of the 30s and 40s and the significance of a sporting hero in uplifting a depressed and downtrodden class. This is “the story of an ordinary man who was at one with the people of his neighbourhood” Smith says, “ but who achieved greatness by extraordinary and heroic deeds on the hurling fields of Ireland and thereby made us all feel better about ourselves”
GAA website “An Fear Rua”, the brainchild of Liam Cahill, called Smith’s biography “one of the greatest books ever written about the game of hurling or about an individual hurler” Diarmuid Flynn, formerly of the Irish Examiner called it “a fantastic story” and PM O’ Sullivan, editor of Sliotar Magazine said: “The Unconquerable Keane takes its place alongside Tom Williams’ Cuchulainn’s Son: The Story of Nickey Rackard (2006) as the finest GAA biography yet produced”.

‘The Unconquerable Keane: John Keane and The Rise of Waterford Hurling’ is available as an ebook in ePub, mobi(kindle) pdf or AZW formats. Hard copies are available nationally at local libraries. Anyone wishing to access this fantastic story can contact David Smith at theunconquerablekeane@gmail.com