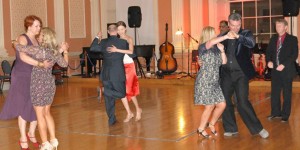 WATERFORD may not seem a likely location for impromptu performances of tango, but Latino flair is sweeping across the city and county this summer. ‘Tango in Waterford’ is a non-profit organisation dedicated to promoting Argentine Tango in Waterford and the South-East. Established three years ago, the organisation has between 20 and 30 members who meet on a regular basis.
Tango is growing in popularity across Ireland, and members of ‘Tango in Waterford’ enjoy regular interactions with tango clubs throughout Ireland. The club’s members meet on Tuesdays and Thursdays. A professional tango teacher comes to Waterford from Dublin on Tuesdays, while members review their progress on Thursdays. Oksana Doherty from Russia and Rafal Krzempek from Poland are organisers with ‘Tango in Waterford.
“On Tuesdays, we meet at Treacy’s hotel which we have used as a venue for three years. Everybody knows Treacy’s as the Tango place!” explained Oksana. On Thursdays, members meet in The Reg. Oksana and Rafal explained that, due to demand, they hope to hold beginners classes from September onwards on Thursdays 7pm-8pm.
Members of ‘Tango in Waterford’ are from various backgrounds and all age groups. The oldest member is ninety five year old Jim, while the youngest member is 18 years old. “It was amazing to watch them both dance together and to see youth and wisdom come together,” said Oksana. “For all of us, to watch Jim gives us so much energy. Jim always says that tango and porridge keeps him going!” Oksana and Rafal are keen to stress that Argentine tango is not a “ballroom” dance.
Ballroom dances tend to be focused on the audience, performing choreographed patterns, while Argentine Tango is improvised, with every step being a spontaneous, creative discovery, and with the partners focused on each other and on the music. The dance is not geared towards competition, and is instead regarded as a “social” dance.
The inclusive nature of tango is something which certainly appears to be part of its enormous appeal. “Tango is all about connection. We regularly change partners as this allows us to connect with different people,” said Oksana. Rafal added: “It’s a social dance. Tango is for people who want to meet different people and spend time together socialising. There are many different ways of meeting people apart from just going out for a drink. Tango is a different way of meeting new people.”
‘Tango in Waterford’ does not just include different age groups but also many different nationalities, with members from countries such as Poland, Russia, Slovakia, Moldova, Venezuela, the UK, France, and Spain. Oksana says she has seen the confidence and skills of participants develop since they joined ‘Tango in Waterford’. “For men, confidence is probably the most important thing because women can pick up on hesitation when dancing with their partner,” she explained.
Members of ‘Tango in Waterford’ recently performed at The Prom Fest in Tramore where they demonstrated their impressive skills. The Lower Prom buzzed resembled a street in Buenos Aires as dancers buzzed with Latino passion. Their performances attracted many spectators and the decision to showcase their skills in Tramore proved to be a huge success.
“We try to use such opportunities to show that something like tango actually exists here in Waterford,” said Rafal. The organisation has a number of exciting events planned for the coming months. Tango will be performed outside the Bishop’s Palace from 12pm-3pm this Saturday 18th July and every Saturday until the Waterford Harvest Festival.
“With tango, people dance everywhere including in the streets and in the parks. People play music and dance everywhere. That is still practiced in many cities in Argentina and Europe,” explained Rafal. Oksana added: “We have an amazing group that will dance anywhere. For us, performing outside the Bishop’s Palace is another chance to get together and spend time together which is important especially during the summer when some people are away and classes aren’t as regular.”
Tango Immersion Weekend took place in May which featured professional tango teachers visiting Waterford to pass on their skills and knowledge. “We want to bring them to Waterford again because everybody loved their spirit and energy,” said Oksana. During Tango Immersion Weekend, special performances took place in the Large Room in City Hall. It’s hoped that another festival will be staged next May, while ‘Tango Bootcamp’ is planned for September.
The organisation has also carried out fundraisers for Waterford Parkinson’s Association and hope to continue this involvement with the local charity. Both Oksana and Rafal would love to see more members join ‘Tango in Waterford’ and hope that ‘Tango in Waterford’ will continue to go from strength to strength. All at ‘Tango in Waterford’ are grateful of the support they have received from local people.
For more information contact 087-2029895, 089-4145425, email tangoinwaterford@gmail.com, visit Tango Waterford Facebook page, or www.tangowaterford.p4o.net