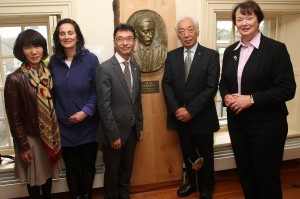 From Friday 9th to Sunday 11th October, Tramore was at the centre of a weekend celebration of Japanese cultural events linked to the Lafcadio Hearn Gardens. Events included the opening of an exhibition about Hearn entitled ‘From Tramore to Matsue’ at Tramore Coastguard Cultural Centre and a special Japanese Tea Ceremony.
TRAMORE was abuzz with Japanese culture last weekend as celebrations took place to commemorate literary icon Patrick Lafcadio Hearn.
Greek-born with an Irish father, he grew up in Ireland but his journey through life embraced several parts of the world.
A famous literary figure in Japan, he is best remembered today in the Land of the Rising Sun by his adopted name, Koizumi Yakumo.
The Hearn connection to Tramore is that he spent his childhood summers in the seaside town in the company of his grandaunt and guardian, Sarah Brenane, whose remains rest at the Holy Cross Church.
Generations of Japanese children have been taught English through the medium of his translations of many key works of Japanese folklore and legend.
Earlier this year, the Lafcadio Hearn Japanese Gardens were opened on Pond Road.
The gardens pay homage to Hearn and to the fame he attained in Japan while also charting his journey across the globe.
Since opening in June, the gardens have attracted visitors from throughout Ireland and further afield.
The gardens include a Victorian Garden dedicated to the memory of Hearn’s happy childhood summers in Tramore; an American Garden; a Greek Garden; and a traditional Japanese Tea garden; in addition to a stream garden, ponds, a waterfall and an extensive woodland area.
The main elements of design, in particular the use of rocks and water and the plant selection, are influenced by the tradition of a Japanese strolling garden.
The huge interest in Lafcadio Hearn amongst Japanese people was clearly evident amongst the Japanese visitors in Waterford last weekend.
A delegation of 40 Japanese, Greek and US visitors, all associated with Hearn, were welcomed to Waterford by the Mayor of Waterford City and County Cllr John Cummins at a reception in City Hall on Friday night.
On Saturday, the unveiling of a bronze relief of Hearn took place in the Tramore’s Japanese Gardens.
This was a gift from the Mayor and City of Matsue, Japan – the Japanese city which Hearn loved best, and which hosts his memorial museum.
The visitors were guided through the gardens by Martin Curran and Sonomi Leslie and expressed their deep appreciation of the beauty of the design and the manner in which the gardens pay homage to Hearn’s life and work.
Later on Saturday, an exhibition was launched at the Tramore Coastguard Cultural Centre entitled ‘From Tramore to Matsue’.
The exhibition was opened by Professor Bon Koizumi (Hearn’s great grandson) and Afra Cronin, owner and resident of Sarah Brenane’s former home in Tramore.
The exhibition focuses on old photographs illustrating ‘Hearn’s Tramore’, and features wonderful photographs of Hearn’s family and children in Matsue, donated by the Koizumi family.
Also exhibited are a number of Hearn’s books gifted by Greek collector Takis Efstathiou.
At the launch of the exhibition, Maria Genitsariou, Curator of the Lafcadio Hearn Historical Center in Lefkada, Greece spoke of how the literary icon is remembered in her country.
After the official opening, a very special Japanese Tea Ceremony was hosted in the Coastguard Centre where the art associated with this much loved Japanese tradition was demonstrated.
Two additional artistic highlights of the weekend were the organ recital in Holy Cross Church, Tramore, by Japanese organist, Mami Yoneyama, compered by Monsignor O’Mahoney, and the powerful mixed media dramatic presentation at Garter Lane of episodes from Hearn’s life and work.
During the weekend, the visiting guests stayed at the Majestic Hotel and a number of B&B venues in Tramore.
They enjoyed traditional Irish hospitality and were most impressed with their surroundings.
Agnes Aylward believes there is huge potential for attracting Japanese tourists to Waterford.
As millions of Japan’s ‘Baby Boomer Generation’ enter retirement, she believes there are huge opportunities to attract tourists interested in “nostalgia vacations”.
“Many Japanese people like to travel to locations which have a connection with their own country,” she explained.
There have already been expressions of interest about travelling to Tramore from UK travel agents operating on behalf of Japanese tourists.
Agnes paid tribute to all involved with the Lafcadio Hearn Gardens, including the many volunteers who have given their time to form part of a ‘meet and greet’ roster to welcome visitors from all over the world since the gardens opened.
Agnes and the team involved with promoting Tramore’s connection with Lafcadio Hearn deserve great credit for enhancing the town’s cultural offering.
A number of additional projects are in the pipeline to further enhance the Lafcadio Hearn connection.
Next weekend is the last weekend this season when the garden will be open to the public, with the exception of Thursdays when it will remain open for some further weeks.
The exhibition at the Coastguard Centre runs until Sunday October 18th. For more information visit www.lafcadiohearngardens.com.