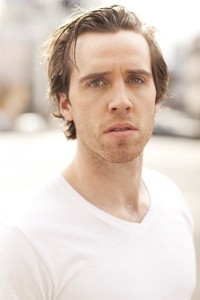 WATERFORD native and Dublin-based Elijah
Egan has been tipped as a name to watch in the
Irish film industry, after his production First Kiss
won Best Film and Best Cinematography at the
March on Film awards last month.
Elijah, who grew up in Woodstown, trained
in the Gaiety School of Acting and Inchicore
College. He has worked professionally as an actor
in America, Australia, Czech Republic, Germany,
Switzerland, Denmark, Ireland and the UK. In his
youth, he performed with Waterford Youth Arts.
First Kiss was made by Seven Figure Films, the
production company Elijah set up with Vincent
Moran. The pair also have a theatre company
called ‘Wilde Shamrock Touring Theatre’, which
has over 100 performances per tour around Europe
each Autumn.
The concept behind the March on Film festival
is that aspiring filmmakers are given the month of
March to create a short film between 3-6 minutes
in length. To ensure that the finished work is made
specifically for the competition, the filmmakers
must all incorporate one prop (a candle), one line
of dialogue (“Say that again?”), and one character
name (Andy Connolly) chosen by the event’s
organisers into their films. Over 100 teams of
aspiring film makers from across Ireland took part
in the competition.
At the awards ceremony, the judges described
First Kiss as ‘a perfect blend of grit and emotion,
plus a great soundtrack… this film shows that a
talented director doesn’t need a big budget or an
extended deadline to tell a good story’.
Elijah won €1000 worth of film rental gear from
the competition’s sponsors Film Equipment Hire
Ireland and mentorship on his upcoming short fi lm
from top industry professionals including Kieron
J Walsh (When Brendan Met Trudy, The Savage
Eye) and cinematographer Tim Fleming (Once,
Gladiator).
Seven Figure Films was established in Melbourne
in 2013 and is now based in Dublin. Since
its inception, the company has produced a number
of award winning productions: Subclass 417 is a
co-production that won a Best Actor award at LA
Webfest, while To Oscar won an award last year at
March on Film.
It has also produced a number of music videos,
including Waterford band Kodakid’s Dirty Like
Rock N Roll.
Seven Figure Films have a debut feature fi lm
planned for next year along with another web
series to follow their award winning web series
Subclass 417.