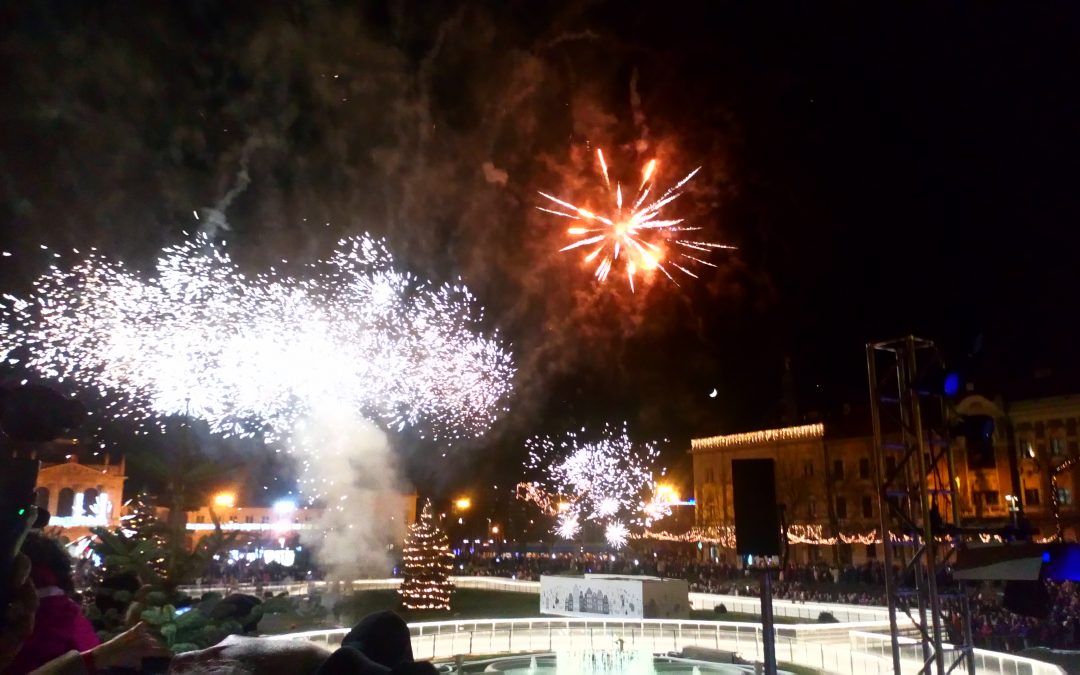 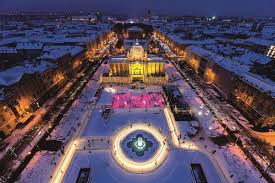 This year we paid a very brief visit to Zagreb. They must be in the European champions league for Christmas.They won the award for best in Europe three times and no longer enter.
The city of 800 000 people, a million with the surrounding area was described as dull over a decade ago and that shook them up and now is a leader. They even have a special Zagreb Times declaring it the best Christmas Market in Europe.
Zagreb was also voted 3rd best Christmas market in the world by Bigseventravel.com
They do a fantastic festival on Advent, which began there on Nov 30 and runs till Jan 7. You could call it a Christmas and New Year’s festival, because it covers the entire winter holiday season. Over 230,000 stayed in hotels around the city last year for the period.Zagreb and central Croatia have a long-storied history with the Austro-Hungarian empire and the food is reflective of that. They have an Austrian tradition from their historic past and a Hungarian one too, so the mix of culture adds to options from decor to food and drink.
It is like a mini Munich or Vienna with fabulous buildings from the late 1800s. The Kingdom of Croatia was part of the Habsburg monarchy that existed between 1527 and 1868, also known as the Austria empire from 1804 to 1867, as well as parts of the Hungarian Crown, but was subject to direct Imperial Austrian rule for periods of time, including its final years. Its capital was Zagreb, so the city has strong cultural and historical links with both countries going back to the middle ages.
The Saturday Christmas Festival opening was really spectacular, our guide Jelena proved to be a great asset and friend, as she took us from place to maximize our short visit.
The Mayor and Bishop of Zagreb both launched it on the main square with traditional rural dancers and musicians performing.Then it was onto the Art Gallery (Modern Gallery), which was lit up at night near King Tomislav square close to the main train station.The real action was at the Ice Park at King Tomislav Square.This was the Nutcracker ballet on ice with famous opera ballet dancers performing and young children in vintage costumes doing terrific ice spectacle as parents and family friends looked with tourists coming from nearby countries to view the spectacle which was incredible and has to be recommended. Irska or Ireland even got a mention by the compere.
Afterwards up near the top of the old town bands played later in the evening, food markets were up there too. There was also a wide range craft stalls in some of the squares and streets. Many other live music bands and market stalls you could see around the Lenucci HORSE SHOE ( Green Horseshoe) a U shaped system of city squares with parks in downtown Zagreb, near the main square too, in what was like a winter Spraoi the diversity of options was immense and is all possible by walking, but a tram is better at just 50 cent a journey or get a weekend pass call the Zagreb card (can be bought for 24 h or 72 h), giving you free tram use , a view from the skyscraper bar and museum discounts. Try this Zagreb 360 skyscraper bar and observation deck for photos and is a top attraction for visitors. 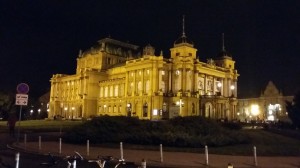 Afterwards we had a drink at the Orient Express bar, which was a real old Edwardian style train carriage from that time of the train that went from Paris to Venice and onto the east to Istanbul.Next door there is a fine restaurant called Vinodol, has great quality European food. Vinidol prides itself on authentic Croatian cuisine, which is clearly a melting pot of varied European cuisines.Both are located on Nicola Tesla street, named after a man, who had big influence on the invention of electricity current, At Vinodol you can watch cooks at work.
There was a big buzz in the air, in the early evening just on darkness you can go to a special high rise building Zagreb 360 for a sky bar view from the city centre and see Zagreb lit up, the Cathedral of St. Mary of Assumption on the Kaptol, tallest building in Zagreb and Croatia. There’s also St. Mark’s church on Gradec with its colourful roof that is lit up and the Kaptol area, where the parliament and old town is located, really magnificent.
Great food stalls too and lots of warm drinks or beers, people were well behaved, no one in bad shape. Fantastic range of international and local food from the stalls in the market and drinks too, even some cherry liqueurs. Later you can find music venues too. A full programme was on daily at the main stage of top of the hill with top class bands and will run even on Christmas Day.
Earlier in the day we visited the fine Dolac market stalls are open form 6 AM TO 2 PM selling fruit, vegetables, meats, poultry and game plus a special fish market. It was amazing for choice beats going to a supermarket at home, great to see such traditions survive. Great fresh variety of produce. You can dine well here too and cheaply at lunchtime.
Zagreb is a brilliant and great city too to walk around admire the fine period buildings from the late 1800s to 1910 and see a different flavour of Europe so much better than the USA.
The museum area called the Lenuci Horseshoe is like South Kensington in London.
All nicely placed near one another modern art to sculpture, to technical ones like the Nicola Tesla museum ,he who invented the AC current in the USA and worked with Thomas Edison, he was an early innovator too of wireless energy, ahead of the mobile phone industry. We even saw a sign for a torture house and a world first is the Museum of Broken Relationships. We liked the Mimara museum with French impressionists, plus great china and silver collection. THE MIMARA has a Picasso exhibition and the Modern Gallery had an American art display, by Alexander Calder from the 50s. 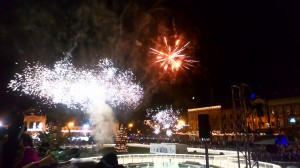 One hour is enough at most for each. We had a quick visit of the State museum and was really good from the early pre-Roman times, to contemporary times. The tunnels in the old town, built in the 1940s are used in the Advent festival also and people take pictures there and do a night walk, all free. The city has a river too, the Sava. We missed the Botanic gardens but there is a further tip, the Cathedral is worth a visit and see some of the old Croatian writing on the wall (Glagolitic). built in 1910. In 1904 an earthquake destroyed the old one in the 1890s.
Try the shortest funicular in the world from the lovely Ilica shopping street, which is excellent in terms of store range and go up to Strossmayer promenade and the tower, where the cannon is fired.Nearby, also is the city town hall and parliament buildings. Next stop was the stone gate, where a blessed virgin painting survived fire and earthquakes.
Shopping
We were very impressed with the quality of retail stores, for many items from clothes to pet care, vinyl records, the ladies dress very smartly and know how to coordinate classy clothes, the men too were looking good.
Dining
Food places to mention include:
Vinodol for great European food on Nicola Tesla Street one we had a very nice dinner at the Rouge Marin city restaurant on Petrinjska, high quality food and they also had many stalls at the Christmas market locations, menus for two could be 30 euro. Zinfandel was recommended in the classy Esplanade hotel for that special meal. Day two we had a nice lunch up on the Strossmayer promenade area, near the Lotrscak Tower, where they fire a cannon daily at midday, a tradition that dates back to Turkish invasions of the east and south east Europe. You can even smell the sulphur in the tower as the man fires the cannon. We had a nice steak near there at the Bistro Vjestica.
Perhaps best recommendation for food and service was the Agava near our Hotel Academia on Tkalciceva st., great fish and meats and terrific service too. A very good blues bar is nearby and there are also two Irish pubs one is called Harats and they have both Irish and Croatian music, other one too called Sheridans and Belfast North (these two are not so central, but there’s Oliver Twist, O’Hara and Talkin’s in Tkalciceva and Opatovina, the street parallel to it and that goes to the market.) For music there is so much going on at the advent market near Strossmayer with a daily programme of the better Croatian rock bands that were really good, and the crowd sang along to their favourites both young and not so young like ourselves.
Beer quality is good we like the Karlovacko at 2.50 euro a half litre, you can also get the Staropramen from Czech Republic plus craft beers too.
Wines high quality too, Jelena recommended the Grasevina, comes from Central Croatia , Slavonian wine (mainly whites like Grasevina and Traminac, amongst others) Malvazija is more common in the Istria region, Posip (white) is from island of Korčula island .
Shiraz cordut is a good red, the pinot Bolfan was another good bodied red. The spirit they drink is Sljivovica- plum brandy and many fruit liquors like cherry or peach.
Accommodation
The hotels are good value in Zagreb.Apartments most popular, see many websites offering this service as shortage of hotel rooms in Zagreb.We stayed at Academia 80-100 euro, for top luxury at 150 euro is the 5 star Esplanade, built in 1925 to provide passengers on the Orient Express train from Paris to Istanbul with luxury accommodation and the 4* Palace hotel would be less and where some celebrities would stay, as there is old world charm.
Getting there
Direct flights from Dublin to Croatia and Zagreb with Croatia Airlines a few times a week, book in advance for 180 euro return fares, Ryanair do not fly to Zagreb but go to the coast. Trains not great but many good local bus options.Cheaper than car rental, petrol prices higher than Ireland. We went out Thursday 11AM and back early Sunday 8AM.
Taxi from airport was 30 euro or fiver on a bus to bus station.They have a different currency, the ” KUNA” is 7 to 7.2 to the Euro, get some in Dublin before you fly and change more in Croatia at a better rate and no commissions. Plastic no good in markets or small restaurants.
For more information, please visit: www.croatia.hr and www.infozagreb.hr