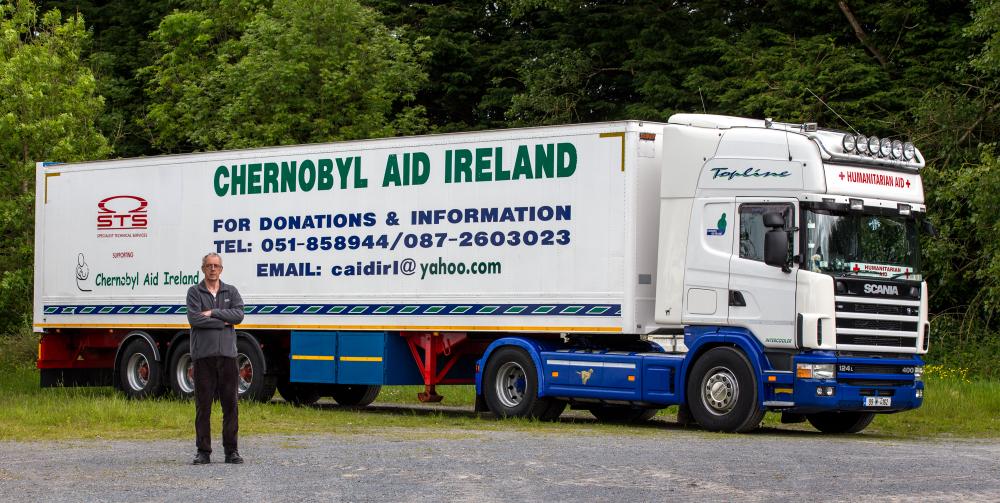 2020 brought many traditional rituals to a shuddering halt. Numerous events and activities which had been annual fixtures were either postponed or cancelled.

One such practice derailed by the pandemic was the twice-yearly visits by a Waterford based charity to help citizens in Belarus. Since 1997, volunteers with Chernobyl Aid Ireland have been embarking on missions to the former Soviet country to deliver donations and undertake voluntary work.

Chernobyl Aid Ireland is a voluntary organisation run under the leadership of Liam Grant, a retired paramedic originally from County Tipperary but living in Listerlin, South Kilkenny for many years. The charity consists of members from throughout Ireland, including a large cohort from across the South-East.

Liam initially began travelling to Belarus with Chernobyl Children’s Project when the charity was seeking volunteers in the nineties.  He was incredibly moved by his experiences and so motivated to help that he went on to spearhead the efforts of Chernobyl Aid Ireland which has been making a huge difference to the lives of ordinary citizens in Belarus for 23 years.

Many of the same volunteers travel with Chernobyl Aid Ireland each year, meaning close friendships have developed with the people they meet in Belarus. Throughout the pandemic, Liam says volunteers remained in contact with their Belarusian friends on a regular basis.

“We probably have more friends in Belarus than we do here in Ireland!” he remarks.

Over the years, Chernobyl Aid Ireland has been recognised for its wonderful work including when Liam received an award from the Department for Humanitarian Affairs in Belarus in recognition of his humanitarian work. The award certificate references his “humanity, compassion and significant personal contribution to the implementation of humanitarian projects in Belarus”.

Many citizens in Belarus are continuing to grapple with the fallout from the events of April 26th, 1986. On that day, at reactor number four at the Chernobyl nuclear power plant near the town of Pripyat, a sudden power output surge took place and, when an emergency shutdown attempt was made, a more extreme spike in power output occurred which caused a reactor vessel rupture and a series of explosions. A resulting fire sent a plume of radioactive fallout into the atmosphere and across an extensive geographical area including much of Belarus.

When the full extent of the catastrophe emerged, charities around the world were founded in order to deal with the long-lasting fallout from this cataclysmic event.

When volunteers with Chernobyl Aid Ireland embarked on their initial trip in the late nineties, they identified the Grozovo Boarding School, located 100km south of the capital Minsk, as needing serious refurbishment.

This former military barracks, home to an orphanage and school, was derelict and lacking basic facilities. There was no hot water and overall living conditions were very poor.

“It was in a terrible state,” recalls Liam.

Since 1997, the building has been renovated with new PVC double glazed windows, dry-lined and insulated bedrooms, new shower units with hot water, new kitchens and a fully functioning farm. All of this improvement work has been made possible thanks to the generosity of Irish people towards Chernobyl Aid Ireland.

Liam praised all who give their time freely to travel and use their skills and enthusiasm to help improve the lives of others. “Everyone gets stuck in,” he says.

The charity’s truckloads of aid normally arrive at centres in Minsk and are then distributed to the homeless, the poor and residents at Grozovo. The building is now much more hospitable for the 200 residents with special needs who call it home. However, further significant work is due to be carried out. Volunteers aim to construct additional toilet and shower facilities along with continuing the general maintenance of the building.

Before Covid-19 restrictions were imposed last year, volunteers with Chernobyl Aid Ireland were ready to depart on another expedition to Belarus. Four trucks were due to travel in a convoy across Europe, while 30 volunteers would also fly from Ireland.

“Air fares were paid, and the trucks were loaded and ready to go,” explains Liam.

The rapid spread of the virus, the subsequent closure of borders and the imposition of extensive travel restrictions, left the charity facing a predicament.

“We had a lot of big jobs planned,” says Liam. “Everything had to be unloaded and put back into storage.”

Items ready for transportation included clothing, various building materials, as well as large quantities of salt for use in a special system designed to extend the life of shower units. Liam says there was a lot of disappointment, both in Ireland and Belarus, at being unable to travel in 2020.

It was uncertain as to whether a trip could proceed in 2021. However, on Monday September 6th, a convoy, consisting of two truckloads of humanitarian aid and four volunteers, departed South Kilkenny and travelled to Rosslare bound for Belarus.

After arriving at Dunkirk in France, the convoy made its way across Europe towards the Poland-Belarus border. Crossing the border required plenty of preparation to ensure all went smoothly. Prior to departure, visas had been obtained which covered a broader period for travel. However, due to the pandemic, there was no time for embarking on major projects after arrival. Instead, after unloading their aid, it was time to turn around and embark on the home leg of the journey.

As part of Chernobyl Aid Ireland’s Rest and Recuperation programme, children have been coming to Ireland during the summer months and at Christmas. The children gain an opportunity to improve their English which benefits their future career prospects. Many of the children have gone on to attend university and college – something which was practically unheard of in Grozovo in 1997.

Sadly, Covid-19 restrictions meant children were unable to come on visits to Ireland as part of the Rest and Recuperation programme during 2020. Children’s Co-ordinator with Chernobyl Aid Ireland Elena Gordeeva (known to all in Waterford as ‘Alice’) says this has been upsetting for the children as well as their Irish host families.

Elena says host families in Ireland have been contacting her regularly to ask if the Belarusian kids will travel this year. Sadly, no visits are planned for the remainder of 2021.

“It would be more expensive to bring everyone due to Covid-19 tests etc. and there would also be a lot of additional paperwork,” explains Elena.

However, she hopes that the Rest and Recuperation programme will be back up and running next year. “We have to learn to live with Covid,” she adds.

Born and raised in Minsk, Elena lives in Waterford City and originally came to Ireland as an interpreter. She became involved with Chernobyl Aid Ireland and was able to provide advice on dealing with the authorities in Belarus. She has participated in many of the trips to Grozovo, normally flying a week prior to the departure of the convoy. She would then meet the convoy at the border and assist with entry.

Elena also worked as part of the volunteer teams at the orphanage and has seen the “massive difference” which the charity has made. She recalls arriving at the Grozovo for the first time and observing very basic conditions. Children had to go outside in freezing conditions to access the basic shower room.

Having first-hand experience of the difference which the charity has made, Elena is passionate about ensuring work can continue in Grozovo and is appealing to everyone to support all fundraising efforts. Maintaining fundraising efforts throughout the Covid-19 pandemic was hugely important to ensure that the recent trip became a reality.

Special fundraisers took place in March, centred around St. Patrick’s Day when people were invited to stage their own Covid-19 compliant parades at their homes. Some people also organised their own individual fundraisers throughout the year.

“There was an amazing response to our fundraises,” says Elena. “It’s important that the trip happened so people could see how all of this money was used.”

In a wonderful endorsement of the incredible work of Chernobyl Aid Ireland, Elena explains that many of the children who have participated in the Rest and Recuperation programme have donated to the charity. Additionally, when volunteers visit nearby towns during their normal twice-yearly trips to Grozovo, they are often warmly greeted by former orphans, now adults, who have gone on to pursue various careers. Some have come back to Grozovo to assist Chernobyl Aid Ireland volunteers with their projects.

Elena says many people were pleasantly surprised that last week’s trip actually took place. She believes the success of this trip is testament to the determination and commitment of all involved with Chernobyl Aid Ireland and the support of the public and businesses. For example, DFDS Ireland kindly sponsored the outward journey which proved to be hugely beneficial.

Chernobyl Aid Ireland has another four trucks ready to be filled and volunteers hope to embark on another trip in the near future.

Those involved with the charity say they passionately believe in “kindness, compassion, love, respect and the selfless giving of help to those in need”. Since 1997, they have certainly showed all of these traits and hopefully their admirable efforts can continue for many years to come.