Home » All Front Page News » Echoes of the past at Durrow

Echoes of the past at Durrow 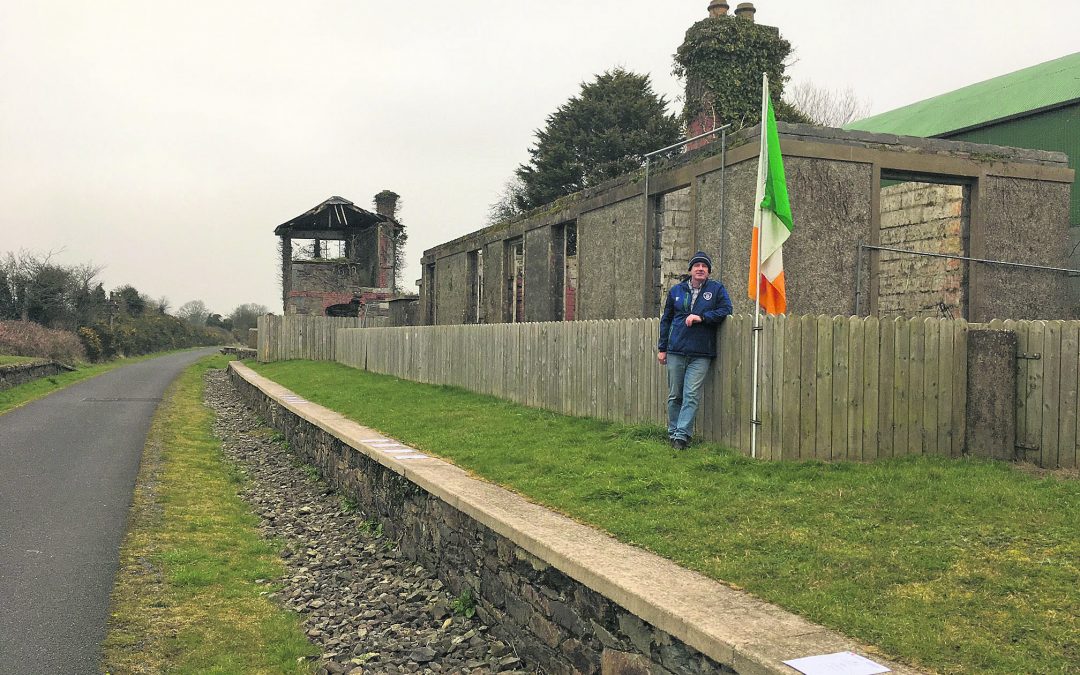 Last Wednesday marked the 100th anniversary of the Durrow Engagement which was an escalation of the War of Independence and one of the first engagements of the newly formed West Waterford Flying Column against enemy troops on the railway line. At the time, the British authorities were having great difficulty in getting jurors to attend the law courts. On March 3rd 1921, a train that was specially chartered to transport jurors to Waterford City
for court duty was held up near Durrow Train Station. It was anticipated that when news of the non-arrival of the jurors’ train reached the British authorities, military would be sent out from Dungarvan along the coast road where Volunteers would be ready to ambush them at Ballyvoyle.

During the subsequent day of fighting, events moved to Durrow and to the creamery located behind Durrow station where, according to reports, up to 300 British forces took cover while around 20 Irish Volunteers were in the vicinity of the station. A machine gun was brought by train from Waterford and was used in the engagement but was nullified by Volunteers who targeted the operator. The Volunteers suffered one injury, Andy Kirwan of Bonmahon. It’s thought the British suffered a number of casualties with possibly two fatalities but this was never confirmed. On March 3rd 2021, Durrow station was a much more peaceful scene when Mayor of Waterford City & County Council Cllr. Damien Geoghegan (FG) was present to commemorate the events of 100 years
ago. 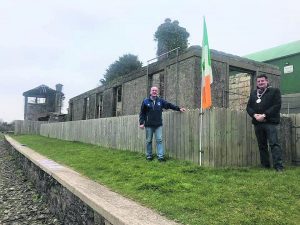 In what was a small event due to Covid-19 restrictions, the Tricolour was flown at Durrow station and the written accounts of five Volunteers who fought on the day were laid out on the platform. These accounts were taken from the Military Bureau Archives which were collected in the 1950s
from Veterans of the conflict.

Echoes of the past

The events of March 3rd 1921 represent just one chapter in the remarkable history of Durrow station. Infamously, the magnificent Ballyvoyle viaduct, which is located nearby, was blown up August 8th 1922 by the anti-Treaty IRA during the Civil War. The following January, a ballast train which had been engaged in repairs was intercepted by Republicans and sent back westwards towards the viaduct. It ended up at the foot of the viaduct, with the ballast carriages dramatically draped over the truncated embankment. Such was the importance of the rail line that the Free State government deemed rapid reconstruction essential. Reconstruction took place using mass concrete and cast iron.

Since the Waterford Greenway was officially opened in March 2017, 50 years after the last passenger service operated on the rail line, visitors from all over Ireland and the world have descended on Durrow.

The section of the Greenway at Durrow, commonly referred to as the ‘Golden Mile’, is arguably one of the most interesting of the entire 46km Waterford Greenway. This section boasts a variety of noteworthy features including Durrow tunnel and viaduct. Stories of historical interest surround the many walkers, runners and cyclists of all ages who traverse the ‘Golden Mile’ – but how many passers-by are aware of all these echoes of the past? 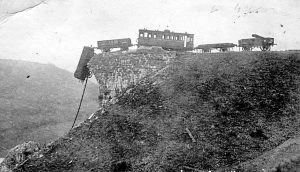 The carriages of a ballast train hanging over Ballvoyle Viaduct in January 1923. Photo: Waterford County Museum.

Garvan Cummins, who organised last week’s commemorative event at Durrow station, passionately believes that the many historical stories associated with the area should be brought to further prominence.

Garvan operates ‘The Greenway Man’ bike hire and tours based at Durrow and he possesses an encyclopaedic knowledge of the Greenway route. He has huge pride in the local area and wholeheartedly believes in its future potential.He cites the recent refurbishment of the station and signal box at Kilmacthomas as an example of what could be achieved at Durrow station. He also believes there is huge potential for showcasing Durrow’s railway heritage, something which has been achieved with great success at Kilmeaden thanks to the popular Waterford &amp; Suir Valley Railway (WSVR).
Garvan believes the commencement of a project at Durrow is the next logical step of the Greenway’s further development. A beautiful playground created by talented craftsman John Hayes had been installed at Durrow but was subsequently removed and placed in storage. Many in the local community look forward to the return of this amenity to the area. 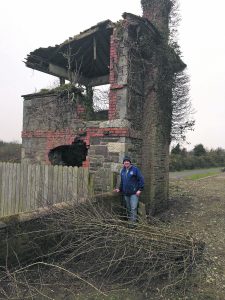 Currently, the station and signal cabin structure at Durrow are a sorry sight and paint a picture of Durrow which is a far cry from its heyday. However, Garvan believes both structures have significant potential and can be improved aesthetically.

“The signal cabin is superb,” he says. “It’s structurally sound and would look stunning with proper timber, windows, and a slated roof.” If a funding source for such a renovation project could be identified and ring fenced, Garvan believes this would represent “money well spent”. “This is a piece of infrastructure that has been so important to this area. It was a vital part of the community,” he says. Although he doesn’t have any specific preference for what should be located within a refurbished site, Garvan passionately believes that the promotion of the area’s history and heritage should be a cornerstone of whatever is created. He possesses various records detailing the many exports from Durrow to the UK, mostly agricultural products especially dairy. As the rail line connected with Mallow, which was home to a large sugar beet plant, Garvan notes that many local farmers diversified into growing sugar beet as a direct
consequence. One export which isn’t well documented is the tragic export of so many citizens. The platform at Durrow station was the scene of many a sad farewell as local families bid farewell to loved ones in search of a better future. 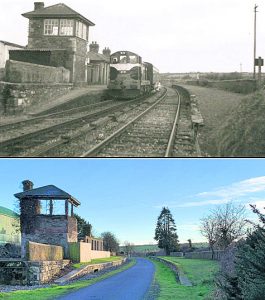 Then and Now at Durrow Train Station.

“People would have been the biggest export,” explains Garvan. “Young people in their late teens and early twenties would have gone to England or further afield and some probably never returned. There are many stories told of parents arriving on Christmas Eve for the last train to arrive – more in hope than expectation that their son or daughter would come back.”

Along with a group of like-minded individuals, Garvan campaigned for the Waterford Greenway project for many years as part of the voluntary Déise Greenway group. This group of visionaries strived to highlight the potential of developing such an amenity – often in the face of stiff opposition. The widespread acclaim which the project now attracts is certainly a far cry from the hostility of the not so distant past. To the bemusement of many visitors, there was a time when the concept was a source of huge controversy and was deeply unpopular amongst some politicians and landowners. Having devoted vast swathes of time and energy to promoting the project down through the years, Garvan, buoyed by the project’s eventual success, was inspired to establish his current business. He has become an unofficial ambassador for the Waterford Greenway and has welcomed and escorted many well-known faces on tours of the local area, including former Taoiseach Enda Kenny, RTÉ presenters Ryan Tubridy, Ray D’Arcy and Kathryn Thomas as well as media from across the globe. 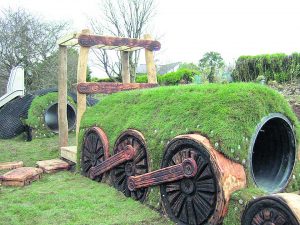 The playground at Durrow which was created by John Hayes.

At a time when new and innovative ideas are required, this latest brainchild from ‘The Greenway Man’ about restoring Durrow station to some semblance of its former glory is certainly worth exploring. When Garvan and a small few others were first beating the drum about the Greenway and its potential merits, very few sat up and listened. Now, the impact of the project on County Waterford’s tourism industry is testament to its enormous success. The opening of the Waterford Greenway has breathed new life into this former rail line which was widely regarded as one of the most scenic lines in the country. This beauty will now be admired by many future generations to come.