Power and positivity for people with Parkinson’s 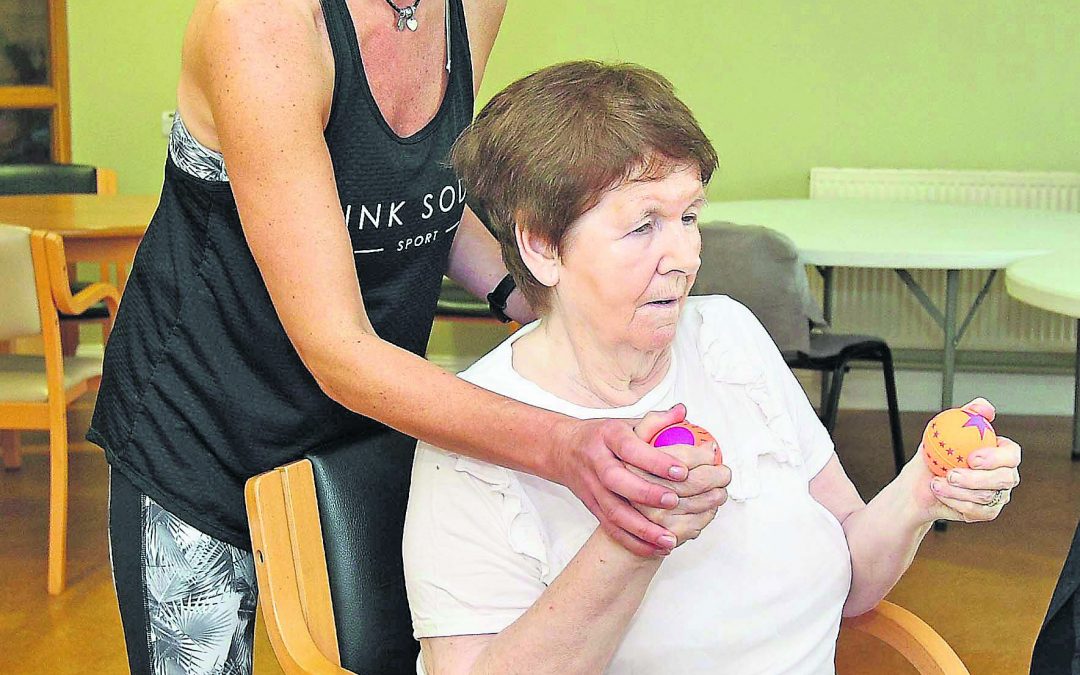 Despite the challenges posed by Covid-19, a local group for people living with Parkinson’s is striving to continue its efforts by embarking on a new collaboration with a neighbouring branch

Parkinson’s disease is a progressive neurological disorder which is caused by a loss of a chemical called dopamine.

Everyone loses some of this chemical as they get older, however, it is only when people have lost about 80 per cent of their dopamine that they start to have symptoms.

Although living with Parkinson’s and other neurological conditions can be very challenging, many people continue to lead active, fulfilling lives and simple measures can contribute to improving their lifestyles.

Parkinson’s is classified as a Movement Disorder, as it primarily affects movement, and is variable in its progression. The ability to speak, walk and swallow can all be compromised for people living with Parkinson’s as can their mental well-being.

This past year has been particularly difficult for people with Parkinson’s as many have not had access to their usual supports such as exercise classes, hospital appointments and even the outdoors.

“Calls to our helpline have doubled because so many medical appointments have been cancelled,” says Parkinson’s Association of Ireland Chief Executive Paula Gilmore. “Many people with Parkinson’s have physically disimproved because they can’t attend exercise classes or physiotherapy.”

Access to neurorehabilitation services has, according to research by the Neurological Association of Ireland, “deteriorated even further since poor levels of access were reported in 2015”. The Association adds that “the ongoing lack of commitment to address serious gaps in service provision, particularly in the community, continues to impact significantly on longer term outcomes for neurology patients.”

The Parkinson’s Association of Ireland receives no core funding from government despite the fact that the charity tries to help some 12,000 people living with the condition – a figure which is expected to double in the next 25 years.

Parkinson’s is the second most common degenerative neurological condition after Alzheimer’s, yet the health services for people here are widely regarded as not being as good as many other EU countries.

The Parkinson’s Association of Ireland has been continually highlighting the need for services for its members, including throughout the past week with online classes and talks as part of Parkinson’s Awareness Week 2021. 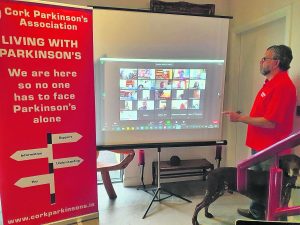 Members of the Waterford Parkinson’s Group are teaming up with Cork Parkinson’s Association to offer connection and communication during COVID-19.

Fortunately, there are many simple activities which can be undertaken which can significantly help people with Parkinson’s. Here in Waterford, a group was set up by local people to help those living with Parkinson’s and has been operational for over 19 years.

Mary Myler was involved as Chairperson until 2018 when she had to retire from the group due to health reasons. The group is now spearheaded by Mary’s daughter Bernadette Myler-Driscoll who has continued to nurture the spirit developed by her mother by offering a club where people who have Parkinson’s can meet and take part in activities that are contributing to their mental and physical health.

Another key factor in the establishment of the club was the need to build awareness of Parkinson’s at a local level.  The Waterford group subsequently became associated with the Parkinson’s Association of Ireland in the mid-2000s and therefore became involved with national initiatives.

The group’s key objective has always centred on the creation of a safe and productive environment where people with Parkinson’s can meet on a regular basis to support each other and where members can participate in physical exercise which is beneficial for people with the condition.

Prior to the onset of Covid-19, the group’s members met each Monday at Waterford Cheshire on John’s Hill for around two and a half hours. A schedule of events was devised to allow participants get plenty of exercise and relaxation in a comfortable setting.

Bernadette says it’s important to provide people with the necessary tools to ensure they can adapt various activities at home to benefit their own health and to incorporate different techniques into their daily lives. She is passionate about encouraging people living with Parkinson’s to train themselves and to possess a mentality which allows them to take control rather than feeling that they are a victim.

“Yes, Parkinson’s is degenerative, but you can slow down the processes. You can do things to help yourself,” she says. “We can stand around and moan about the lack of government support but, instead, we are trying to give people the tools to help themselves.”

The branch does this by having regular visitors such as a nutritionist, an occupational therapist and physiotherapist in addition to offering a variety of classes.

In particular, Bernadette is passionate about highlighting the benefits of yoga for people with Parkinson’s. While there may be a perception among some people that yoga consists of challenging positions which may be beyond their capabilities, Bernadette explains that yoga is a life tool which can be adapted to suit all abilities.

“The whole philosophy behind yoga and its benefits is to strengthen the mind and body,” explains Bernadette. 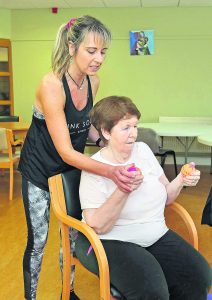 Outings to various locations have been organised and the Waterford branch strives to keep in touch with other groups throughout the country and conduct activities together when feasible.

Bernadette would like to see more people with Parkinson’s get involved but says taking the first step of coming into the club can be the hardest part.

“A lot of people don’t want to come because they think there’s a stigma,” said Bernadette. “The club is not aimed at making people feel marginalised or isolated. It provides a social get together.”

She would particularly like to see more men becoming involved but acknowledges that some men may think that yoga and such activities are not for them. However, she says they can be assured of a warm welcome and will greatly benefit from their involvement.

At a wider level, Bernadette believes Parkinson’s isn’t seen as a “sexy brand” and therefore doesn’t receive as much attention as other causes.

The Waterford group self-funds and staged a huge fundraising night at The Woodlands Hotel in Waterford in October 2018. The event was also an opportunity to further heighten awareness of the local branch.

The special night included a drinks reception, a three-course meal and music by Ronan Collins and his Band with Gina and the Champions. Money raised by staging the event helped with maintaining the club and contributing to classes.

In addition to raising awareness, Bernadette believes it was important to stage a fun event and something linked to music as the positive benefits of music and movement for people with Parkinson’s have been well documented. 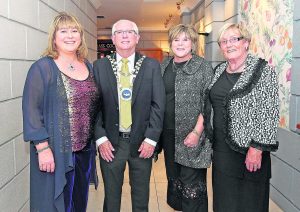 Unfortunately, such events now seem like a distant memory from a pre-pandemic world.

Bernadette says significant progress had been made down through the years in terms of meeting the objectives of the club.  However, since 2020 and the onset of Covid-19, the club has been unable to meet and, as with everywhere else in the world, it has been very difficult, particularly for vulnerable groups of people, to keep in touch and to connect on a regular basis when no face-to-face contact has been allowed.

Waterford Group in a Covid World

Keen to continue their efforts, Bernadette outlines the steps which the group is embarking on to reorganise so it can provide connection and communication with each other, and other members of the team including teachers, as well as other groups throughout the country.

This re-organisation means getting members familiar with smartphones or computers to allow them to access classes via Zoom; the development of a specific website for the Waterford group; and the nurturing of interaction with neighbouring groups to reconnect and to avail of the knowledge and experience of others.

Bernadette has been working closely with Cork Parkinson’s Association Chairpersons Ted Horgan and Tony Wilkinson. The Cork group has more than 120 members and Bernadette says the Waterford members will benefit from their experience, knowledge base and contacts.

The Waterford group will place laptops with key members so that members can access the classes and discussion groups set up and run by the Waterford and Cork groups. These will cover topics including: Chair Yoga; Alexander Technique; a mental health forum called ‘Head Space’; diet and its relevance; and the importance of sleep. There will also be ad hoc guest speakers/discussion groups covering such topics as: Physiotherapy; Psychiatry; Occupational Therapy; and Research.

“We are going to run one to one training sessions and have support for the teams so they can work with this I.T. and not feel overwhelmed or intimidated by it,” explains Bernadette.

She is organising the purchase of laptops and organising set-up and training.  She is also establishing a specific website for the Waterford group but members will initially begin by using a Waterford specific page on the Cork Parkinson’s Association website (www.corkparkinsons.ie) 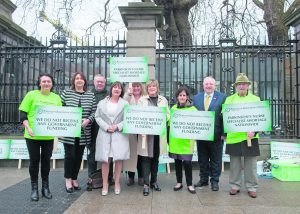 The Waterford specific website will be designed and launched in three months but the dedicated page on the Cork website will be up and running within the next three weeks.

“The key thing is to keep the club going and keep the values that we developed as a group over the years,” says Bernadette. “We need to be flexible and accessible and that is the goal for the first half of 2021 – to get connected! To keep moving and to work with our partners in Cork thereby offering an array of classes, groups, information and open communication in these difficult times.”

Bernadette is a passionate campaigner for Parkinson’s and has regularly called for more supports for people living with the condition. In recent years, campaigners have gathered outside Leinster House to further highlight their cause.

Another issue raised by many key stakeholders in the ‘Mapping Parkinson’s’ project is that there are just five to six Parkinson’s nurse specialists in Ireland. 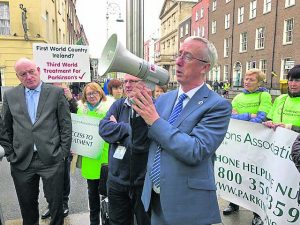 Campaigners calling for greater supports for Parkinson’s during a demonstration outside Leinster House.

Professor Suzanne Timmons, from the Centre for Gerontology and Rehabilitation in UCC Timmons says: “Parkinson’s disease is common and is currently incurable, but there is so much we can do to improve the health and quality of life of people living with Parkinson’s. This project aims to provide data and personal experiences of current gaps in service provision, to inform future health service planning for people with Parkinson’s so that everyone gets access to timely and equitable care.”

While there are certainly many challenges ahead, it’s clear that the Waterford’s Parkinson’s branch is keen to take any proactive steps which can help improve the quality of life for all involved.

Giving people with Parkinson’s the opportunity to have power over their condition and placing an emphasis on the need to remain positive will undoubtedly continue to improve the lives of all living with this condition.