Glencairn Life Through A Lens

“Anyone who has ever passed through the gates of Glencairn Abbey, know well that as well as delicious cherry cake, it has something very special to offer. It gives people peace, time to listen to the inner spirit and encouragement when facing difficulty.” – Mairead Lavery
‘Glencairn Abbey: A Year in the Life’ is a magnificent photographic account of the daily goings-on at the only Cistercian Abbey for women in Ireland, which was established in the Blackwater Valley near Lismore in 1932.
The photographer charged with creating the visual account, Valerie O’Sullivan, has assembled a magnificent record of the Abbey’s living reality, which is aided by the contributions of many of its faithful residents.
In fact, one could argue that the book is as significant in safeguarding the Abbey’s heritage as the multi-million Euro revamp of the campus which was undertaken over the past two years.
“I’ve made many visits to Glencairn on both a professional and social basis for many, many years,” said Valerie, “and I was there in November 2016, with Mairead Lavery of the Irish Farmers Journal; we were doing a Christmas feature for Irish Country Living (the magazine that features in the Journal) and the Sisters mentioned that they needed a few more fundraising ideas (with the third phase of the building project in mind) and they asked Mairead and myself what they might do. So I suggested to Sister Sarah, Sister Lily and Mother Marie about doing a book – and we just jumped to it and that was it! I rang Gary O’Sullivan at Columba (Press) and the seed was sown and between us all, we delivered the book which we’re all delighted with – it really was a team effort on behalf of everyone involved.” 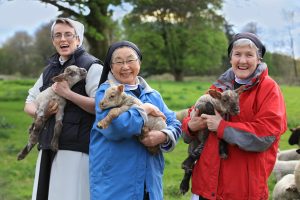 'Glencairn Abbey: A Year in the Life' provides a fascinating insight into a different way of life that's been rooted in West Waterford for almost 90 years. | Photo: Valerie O'Sullivan

Valerie continued: “The book grew from that first conversation and we decided to run a theme through the book which combined the scenery of the Abbey and the daily activities of the Sisters with the Liturgy; it’s a book about the Sisters, for them and by them which opens up a small window into their lives, which are not so different to our own, albeit in their own environment. They have their own worries, as we all do, but they do everything delightfully. They live in a beautiful part of West Waterford, a safe and peaceful environment, and another thing people might not always associate with Nuns of any kind is that they’ve got a great sense of fun. I’d a blast working on this book and they really are a lovely bunch of women.”
Tracing the seasons, as the book does, meant this wasn’t a case of Valerie spinning down from her home in Kerry for a long weekend and moving onto her next project. This was a work that required days, weeks and months of personal and professional investment, all of which is wonderfully evident across each of this book’s 160 pages. And it required a few very early starts for Valerie.
“The Sisters are up at ten to four in the morning for first prayers – it’s a ferocious hour – it’s neither day nor night, and when we’re all sleeping, they’re all praying very deeply and that goes on for about 50 minutes. But it’s a perfect time in a monastic sense; life for the Sisters is one of both constant prayer and work (they pray at seven scheduled times daily, often in silence). Now the thought of getting up at that hour would be a struggle for most of us but these women are doing it for the love of God and the love of mankind. So yes, I was there for the Vigil Prayer and the Easter Vigil was particularly special. A lot of people from the wider Glencairn area and from across Waterford go to that service, which begins at 11pm and includes a candlelit procession which takes you from the darkness and into the light of Easter Sunday morning. And the place is packed, which again you probably wouldn’t credit yourself unless you’re there and taking the time it’s on at into the equation. And it really is a lovely service.”
Valerie added: “When you think about the rhythm of their day, which starts and finishes with prayer and with work in between, it’s extraordinary, yet they really are the same as everybody else in so many other ways. The Sisters are very earthy people and very close to nature. They’re good people and it’s a pleasure to be in their company. And their good nature and welcome and the beautiful setting they work and pray in made this a very special piece of work to be involved in.”
The recollections offered by the Sisters are the perfect companion to Valerie’s wonderful imagery, and the words of Sr Gertrude, the Abbey’s Librarian for the past 50 years, encapsulate life at Glencairn.
“Living with people from different backgrounds, countries and ideas opens one’s mind but also means learning tolerance, openness to the sometimes very different views of others, learning to accept and to love all sisters. And the essential, drawing nearer to the Lord, day by day. Joys and sorrows, ups and downs, over fifty years of it. So…Was it worth it? YES YES YES.”
So give this book, which details lives uniquely lived in our county, a perusal. It’s well and truly worth it.