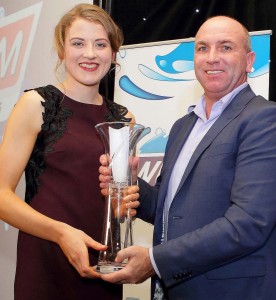 Gaultier and Waterford Camogie’s finest and seven-times Poc Fada champion Patricia Jackman was deservedly named the 2015 WLRfm/Granville Hotel Overall GAA Award winner on Saturday last and became the first woman to ever pick up the accolade.
Speaking after special guest DJ Carey made the big announcement before a packed Granville Hotel Tapestry Room, the All-Ireland Intermediate Camogie winner was, for once, caught off step before receiving her award.
“I’d my shoes off there,” a delighted Patricia told Liz Reddy once she made he way to the stage amongst a standing ovation.
“This year was a lot of hard work, but it all paid for us in the League and the All-Ireland Final, and personally it was great to hold onto the Poc Fada title again, but it was all worth it. But winning the All-Ireland was an absolutely amazing feeling. It was an unbelievable day, the best feeling in the world, and to play with the team mates I have has been an absolute privilege.”
Patricia’s dedication, which Brian Flannery reflects upon on Sport 4, was above and beyond the call of duty. Currently studying for a PhD in Sports Psychology at the University of Lincoln, Patricia crossed the Irish sea for 48 return trips to train and hurl with Waterford.
It’s an accomplishment unlike any other, probably in the history of the GAA, but the fact that she was also Waterford’s go-to player, the fulcrum of a talent laced side that lifted two trophies, speaks volumes for her talent and strength of character. Trish truly is a one-off, and if she wasn’t busy enough, her off-field support for her younger team mates is incredible, helping with and preparing study plans for many of them.
Added to this, she also worked with Derek McGrath’s senior hurling backroom team on statistics during the 2015 campaign, so there’s no denying the unique place she holds in Waterford GAA on a whole host of fronts.
That she was also named 2015 Players’ Player of the Year in addition to her Soaring Star award only serves to underline the esteem that Patricia is held in by her peers. Patricia, in keeping with her humility, accepted the Overall Award on behalf of her “fantastic team mates – this for all of us.”
A superb ambassador for women’s sport, let alone camogie in this county, Patricia Jackman deserved her night in lights last Saturday, because no Deise player in the history of the GAA has ever put in the miles, and done the business on the field, the way she has. Take a bow, Trish. And hearty congratulations. 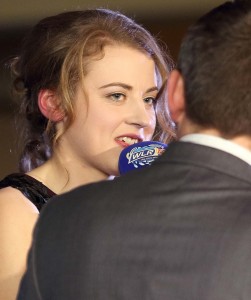 Patricia, being interviewed on stage by Kevin Casey 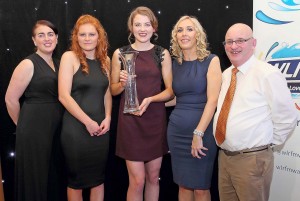 Patricia Jackman IS pictured with the May Monthly winner, Beth Carton and members of the Waterford County Camogie Board (2015), Roisín Hartley (PRO), Ita Murphy (Chairperson) and John C Flood.