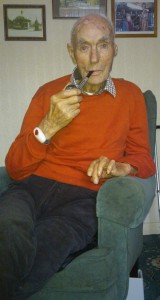 The late Maurice Nugent, laid to rest on Wednesday last, relaxing with his beloved pipe following his 100th birthday in August 2015.

Maurice Nugent laid to rest in his 102nd year
When Maurice Nugent’s remains were laid to rest in Portlaw on New Year’s Eve, a part of the County Waterford village he knew better than anyone else over the past century was buried with him.
During a year in which Brown Street, where he was born, reared and spent most of his life, has lost several elderly residents, the loss of its most senior citizen has been all the more sadly felt.
A kind neighbour, a skilled craftsman, a gentleman of great intellect, Maurice was steeped in the history of one of 19th Century Ireland’s greatest social and industrial success stories: the development of Portlaw, catalysed by the philanthropic and visionary Malcomsons.
Maurice certainly made the most of his years, be it in his childhood home on Number 20, Brown Street, or at Number 10, where he made a home with his late and beloved wife, Mary. Maurice Nugent was, as Father Richard O’Halloran aptly put it, “Portlaw’s oldest friend”. The combination of his physical frame and affable nature made Maurice, who was born on August 23rd, 1915, a gentle giant in the Tannery Town.
And while there has been great sadness since Maurice’s passing at the Mooncoin Residential Care Centre on Thursday last, December 29th, those who gathered at Saint Patrick’s Church on Saturday last did so with genuine, heartfelt thanks to honour a man who lived simply, fully and well.
The story of Maurice Nugent’s life is woven into the modern history of Portlaw, which his friend, Father Ned Hassett, with whom he shared a great love of the area’s heritage, brilliantly encapsulated during his Homily on Saturday last.
“If Maurice were here talking today, he’d most likely stand and say something like this, as he often did: there used to be a large circular candelabra hanging here (just in front of the altar), and another one further out, to light the central area of the church,” said Fr Ned.
“There were wooden railings in a gothic style separating the centre from the women’s and men’s side aisles, with a raised stand in the middle for an oil lamp under each arch (it was Maurice that removed them, first those in the last arch on either side at the back to allow people to cross from side to side, and later he was instructed to take them all out). All that remains now are the tell-tale marks in the granite pillars where they were anchored.
“He would describe the ivy leaf creeping around the edges of the arches, and the stencilled saints over the pillars between the arches facing the centre. He talked about the Stations of the Cross and how they had been housed in more formal gothic frames with ornate pieces of wood extending upwards on the left, right and centre, as well as they hanging outwards as opposed to now being attached flat to the wall.
“Red and black earthen tiles, worn from generations of worshippers walking in and out. Pulpit projecting straight out, as opposed to hugging the pillar now. Wooden gothic altar rails, predated the current marble ones. Wooden boards preceded the present parquet on the sanctuary.
“He knew the Conways who donated the silver sanctuary lamp in April 1917, and happily greeted their descendants when they visited from the States some years ago. He’d have approved of the recent rewiring and new lighting: he always liked to see maintenance and upgrading. He wired his own house, describing how he did very simply. ‘Ah, I studied it up, and saw that there was nothing to it!’”
Apart from a brief period living in Waterford with his city-born wife Mary, and the time recently spent both in hospital and at Mooncoin, Maurice lived his entire life on Brown Street.
“With minimal alteration, Maurice preserved so much of the original features of those 1850s housing, in Number 10, as he liked to refer to it,” Fr Hassett continued. 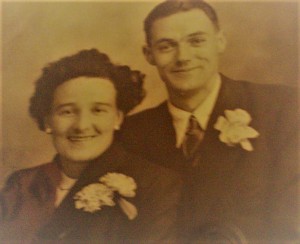 Maurice and Mary Nugent, pictured on their wedding day in 1945.

“He often told of how he had to stand up for himself to get that house from Barlow, the Tannery manager. He, the only one out of 50 houses, kept the decorative barge board. He stuck with the coal fire for heating. The narrow kitchen at the back. Even the original bathroom was maintained, except he moved the door from the yard to the dividing wall from the kitchen. To think that those houses had sanitation and gas lighting 160 years ago. He would point to the wall up over the fireplace where the gas-pipe came in. All a by-product of the Cotton Mill. The roof, again using a by-product of the Mill, calico and tar was a third of the cost of a traditional slate roof.”
Maurice, as Kieran Foley wrote about when reporting of his 100th birthday, was a man of great energy. He drove up to the age of 94. He enjoyed an airplane flight over Portlaw to mark his 92nd birthday!
Indeed, beyond his 90th year, it was not an odd sight to see Maurice on the felt roof of Number 10, with his son Pat (or other relatives or neighbours), carrying out repairs. He was a physical marvel. He thrived on being busy.
Maurice was among the first employed at the new Tannery in the mid-1930s, and as Fr Hassett pointed out, he would have known men who had worked in the Cotton Mill, which closed in 1876 – all of 141 years ago.
Indeed his father Tom (another great craftsman), who also lived into his 90s, came to Portlaw to work for the Malcomsons at Mayfield House.
Fr Ned also humorously recalled Maurice’s role in the celebrations which marked the 150th anniversary of St Patrick’s Church in the autumn of 2008.
“It was pointed out to me that (the statue of) poor St Patrick (to the left of the altar in the church) only had a hand and a half. I knew that (the late) Billy Delaney used to be carving rams’ horns as decorative walking sticks, and I asked himself and Maurice would they tackle the statue. As Maurice said, ‘I was an awful chancer.’
“I brought Patrick over in my car, stretched across the back seat, to Maurice’s garage cum workshop. One day I was summoned. ‘What do you think?’ I was asked. To be totally honest, the new hand was a good bit longer than the old one, the left one. So, I had to spit it out: ‘Is it a bit long in the middle?’ I furtively asked! ‘I was thinking that myself, but I was wondering would you spot it!’ said Maurice. So, he shortened it a bit.
“It was by accident he got the right colour, he said. We had him back in position, but Maurice wasn’t pleased. He had put gold paint on the edges of the mitre, halo and his staff, but St Ita needed to be similarly painted to match. He was over here in the freezing cold getting it right. We actually had him up on the credence table, which is on wheels, to get him level with Patrick, for a photograph. If Pat or Margaret knew the half of what we got up to, they’d have killed us!”
Fr Ned told mourners that he “was enthralled by Maurice’s bottomless pit of knowledge, from what he had seen and heard, about this most intriguing place and people of Portlaw. Under a cloud of pipe smoke and in front of a red hot coal fire, like many others, I spent night after night in the front room soaking up stories of Old Portlaw over here, and modern or Industrial Portlaw across the Clodagh.”
Maurice loved stories and history, and he shared both with hundreds if not thousands of grateful ears, from that small front sitting room in Brown Street.
Maurice Nugent was predeceased by his wife Mary, and is survived by daughter Margaret, son Pat, son-in-law Vincent, daughter-in-law Karen, grandchildren Claire and David, great grandchildren Ciara, Aisling and Emily, his carers Mark, Bridie and Tom, his neighbours on Brown Street and the people of Portlaw, alive and departed, who admired and loved him. May he Rest In Peace.