The Christmas Markets of Bavaria

We were in Munich and Passau on the Danube in the run up to Christmas. Bavaria and Germany are the home of Christmas markets with many countries now copying their wonderful traditions.
The German tourist board say there are 3,000 to 4,000 markets across Bavaria alone in south east Germany alone; we were in Passau visiting and noticed a nice traditional one there, not too large in front of the massive Dome Cathedral, which has the largest organ in the world.
There was a music stage nearby, as well as lots of nice eats – home produced food and quality fare ideal for Christmas time as well as the mulled wine or ‘gluhwein’ and a local rum and tea fruit punch, as well as punches made with forest berries. 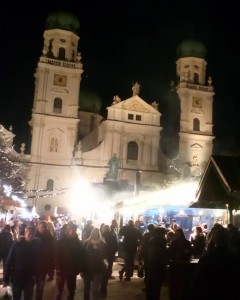 The Christmas market in front of Passau Cathedral.

Buying Christmas decorations and figures for the home crib are other major German crafts on sale, wood craft is a big item on sale, with a wood market dating back to 1600s.
In Munich at the great Tollwood winter festival it was even better. The location is Theresienwiese, where the largest world beer festival, the Oktoberfest, is held, drawing hundreds of thousands of visitors annually.
Hotels are also full in Munich around Christmas time and you can hear, UK, American, Italian and French accents around the markets. We were amazed at the range of entertainment on offer with the traditional craft items for sale as well as the mulled wine.
You could go into a heated tent and listen to a band on stage, have a drink and food with long benches to sit on, an ideal location to meet friends and neighbours there.
Another tent was family oriented, featuring games and adventures for kids. A world salon tent has talks on current affairs and cabaret. Nearby is the hip hop circus tent. Then there was the witches tent again for music; they have many bands in this area on New Year’s Eve with a paid entry it was really lively on the night we visited.
There was also a big food tent for eating Christmas snacks and special treats to take home.
The main tent however is the Bazar: like the names suggests, there are goods from around the world as well as Bavaria. Local craftsmen work much of the year preparing for this event
We found wool products from Nepal in Asia and also yak wool, Thai silk products, Sri Lanka, India , plus Alpaca wool from South America. Given that it was near freezing and with snow forecast, hats, scarves and gloves are big sellers along with cloaks for ladies and pashminas.
Kitchen items were also on display and there was an emphasis on practical gifts of good quality – not ones that would be thrown out a few months later – many people in the area live in small apartments so they endeavour to avoid clutter when they can.
There were not many Irish goods there perhaps an opportunity for the future as the Irish are very popular in Bavaria. The previous evening before we met John Tiernan from Tramore who lives there the best part of 30 years and is married to a local Munchenerin.
Getting there pre-Christmas means you can get better prices on flights and accommodation and not miss the family events back in Ireland we had a mission to meet German relatives however too.
Munich is easily accessible via Ryanair and Aer Lingus with flights twice daily and keener prices now that the two airlines are operating at the main airport; Ryanair used to fly to Memmingen 100km outside the city. Trains get you into the city for €11.20 each way in less than an hour.
We found that they have loads of events at various locations. We saw an orchestra in a church, the traditional market of hundred years plus at Marienplatz, as well as a medieval market too.
At Marienplatz in front of the famous Frauenkirche Church, there is a most well-known market, here they sell lots of figures for the Christmas crib, hand made and not from China, snacks and drinks too.
The aromas there are amazing, from baked cakes and cinnamon/almond biscuits, gingerbread to mulled wines, baked apple and hot sizzling sausages; again a great meeting point for friends and colleagues.
Over at the Tollwood you got kebabs and all sorts plus jager tea and wines. They certainly tickle the senses, the locals are well dressed in their winter woollies of fine hats, scarves and boots.
A general air of bonhomie and good humour, people go there after work and meet their friends as an alternative to the pub scene at home.
For the children there are many types of wooden toys, sweets and cookies so they are happy too.
The cold air means that you will need to seek shelter in a gaststatte or bar eventually or check out the well stocked shops.
Eating you can have the ribs, pulled pork, dumplings, good heavy winter fair, soups also popular especially the goulash soup that we had in Passau.
Passau is a city and former bishopric. Getting to Passau involves a two-hour trip by train. It’s located on the Danube at the crossroads to Austria and not far from the Czech Republic. Another option is to go to Salzburg from Munich, a journey of less than two hours (less than €25 day return). With the Bayern card tickets, you pay a small amount extra, €29.90 for two children with parents travel free up to 16 years old for same price.