Three Waterford athletes won medals at the National Senior Indoor Championships in Athlone last weekend. Back to form Niamh Whelan won two silver medals in sprint events.
On Saturday she won her semi-final of the 200 metres in 24.61 to qualify for Sunday’s final.
On Sunday at first she ran in the 60 metres semi final finishing second in 7.53 and qualifying for the final. In that final she ran a fine race to finish second in a time of 7.49 seconds just outside her best time of 7.48. Phil Healy of Bandon won the race in 7.47.
It was then on to the 200 metres final and again she ran well to take the silver medal in 24.09. Healy won again in 23.78 .Another silver medal winner was Thomas Houlihan, West Waterford in the pole vault with a vault of 4.40 metres. The event was won by Ian Rogers
Clonliffe Hrs with 4.60.
James Ledingham, also from West Waterford who became a father on Thursday last ran in the semi-final of the 800 metres on Saturday and qualified for Sunday’s final in a time of 1.57.23 finishing third. In Sunday’s final he ran very well again to finish third in 1.54.1 and collected the bronze medal, his first National senior medal. The event was won by European
medallist Mark English UCD in 1.51.57.
On Saturday Seán Curran, a young West Waterford athlete, was fourth in the 1500 metres semi-final and qualified for Sunday’s final where he finished eighth. Also on Sunday Miceál Power, another young athlete from West Waterford, finished 12th in the 3000 metres final. A prolific winner at these championships Kelly Proper Ferrybank was unable to compete due to injury but she is back training again.

Schools and University
On Saturday next Sligo Racecourse is the venue for the Irish University and the Secondary
Schools Championships. In the University section Waterford IT will have men’s and
women’s teams competing and one or two of their individual athletes may challenge for individual honours.
In the schools section in four grades many schools from the county will be represented again with teams and a number of individual athletes are expected to figure prominently.
For the first time in its history Waterpark has qualified a girl’s team for the Championships who compete at minor level. 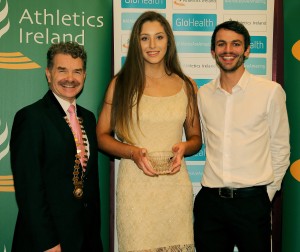 On Saturday last the AAI National Juvenile All Star Awards were presented at a function in Tullamore.
Every year a young athlete from each of the thirty two counties is honoured and the Waterford Award went to Neasa Murphy Ferrybank AC.
Criteria for selection is quality of performance or performances at National Juvenile Championships including outdoor and indoor.
During 2015 Neasa won the national u9 high jump titles outdoor and indoor.