Ballychorus on song at Ballinrobe 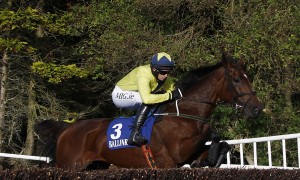 The final Ballinrobe meeting of 2015 took place at the popular Co Mayo track on Tuesday of last week and Goresbridge handler Mag Mullins seems to have a genuine top-class mare on her hands in Ballychorus who landed the Eamon Sheridan Plant Hire & Ground Works Chase.
The King’s Theatre-sired Ballychorus made all in the hands of owner Barry Connell’s retained jockey Adrian Heskin and she asserted before the final fence to dismiss favourite Carriganog by a comprehensive 19 lengths. In all probability, Ballychorus will be kept on the go until the ground changes over the next month or so and on this evidence, she’s a mare that should attain some valuable black-type over fences.
Connell and Heskin were earlier on the mark when French import Tiliver made his initial start on Irish soil a victorious one by readily justifying favouritism in the opening Tim Kelly Group 3-Y-O Maiden Hurdle.
The Alan Fleming trained Tiliver made his way to the front after the second last and he seemed to be containing Le Vagabond when Edward O’Grady’s charge crashed out at the final flight. Tiliver was then left clear to beat Piltown handler David O’Brien’s Double Windsor by nine lengths. Fleming indicated that the clearly-promising Tiliver could now run at Punchestown next month.
The featured race at Cork’s all-flat meeting on Thursday was the Irish Stallion Farms European Breeders Fund Fillies Race, a one-mile race that attracted just three runners.
Tamadhor set out with the intention of making all, but from over a furlong out Joseph O’Brien was sitting motionless on the eventual winner Akira in behind.
Whilst it then took Akira a little while to master Tamadhor, the result was never in doubt inside the final 100 yards as the triumphant five-year-old asserted to score by three parts of a length in the colours of owner/breeder Maxwell Morris from Piltown. The 98-rated Akira incidentally was having a first start for O‘Brien’s father Aidan.
The action moved north to Downpatrick on Friday and Colin Bowe sent up two runners from his Kiltealy base for the Irish Stallion Farms EBF Beginners chase and the pair filled the first two places with Gold Patrol beating Don Vincenzo. The 110-rated Gold Patrol, a maiden point-to-point winner at the Cregg point-to-point meeting in October 2013, was sent to the front by Mikey Fogarty after the second last and he survived a somewhat awkward jump at the final fence where he surrendered the advantage by bravely coming a second time to land the spoils by one and a quarter lengths.
It certainly was an excellent afternoon for Co Wexford horses at Downpatrick for Crossabeg based handler Liz Doyle sent out two winners, Tigroney initiating her brace by landing the Kingsland Maiden Hurdle. Tigroney, owned by Fine Gael senator Paul Bradford, made all the running with talented seven lb claimer Donagh Meyler and she held on gallantly as the line approached to deny the staying-in favourite Barrack Street by one length.
Whizzey Rascal completed Ms Doyle’s brace by returning to the coveted number one slot with Finian Maguire in the Party After Racing Flat Race. Whizzey Rascal eased her way into the lead at the six-furlong marker and she could be called the most likely winner on entering the final quarter mile with three and a half lengths ultimately separating her from runner-up Taras Call.
The action moved onto Navan on Saturday and South Lodge-based handler Mark Cahill sent out Pilgrim Way to win the 27-runner N.I. Childrens Hospice Handicap Hurdle in the hands of Mark Walsh. Still a mere four-year-old, Pilgrim Way took up the running at the final flight and he drew on the flat to contain Noel Dooly’s Perrie Hill by three and a half lengths. Pilgrim Way, rated 91 coming into this race, seems a horse that should have little difficulty in making his up through the ranks, but he is however unlikely to be seen in action over the winter months.