Munster Intermediate Club Hurling Final
Fr. O’Neill’s 2-15
Ballysaggart 0-17
County Champions Ballysaggart had to settle for second best at Fraher Field on Sunday afternoon last as they went under to a strong Fr. O’Neill’s side. The East Cork team were coached up to this year by former Ballysaggart and Waterford Hurler Pat Bennett and they had Lismore man James O’Connor in charge this year.
Over the course of the hour very little separated these two sides but the ability of the Cork side to raise green flags made the difference in the end.Even then Fr O’Neill’s needed a point from Declan Dalton in the fourth minute of added time to make sure they got safely over the finish line.
The win means that the Hoare Cup has found its home in the Rebel County for the third year in a row following on from the successes of North Cork sides Kanturk in 2017 and Charleville this time twelve months ago.
If the East Cork’s side’s ability to hit the net proved to be one of the differences between the sides, the scoring ability of Declan Dalton was also a telling factor. He hit 1-7 which included two monster points from placed balls inside his own 45 metre line, while he was narrowly out in striking another free from a huge difference.
The Cork side won the toss and opted to play with the aid of the slight breeze at their backs into the country goal.Ballysaggart got off to an excellent start game and by the midway point of the first half it looked as if they would join neighbouring clubs Lismore and Cappoquin as the only Waterford winners of the competition since it came into existence in 2004. 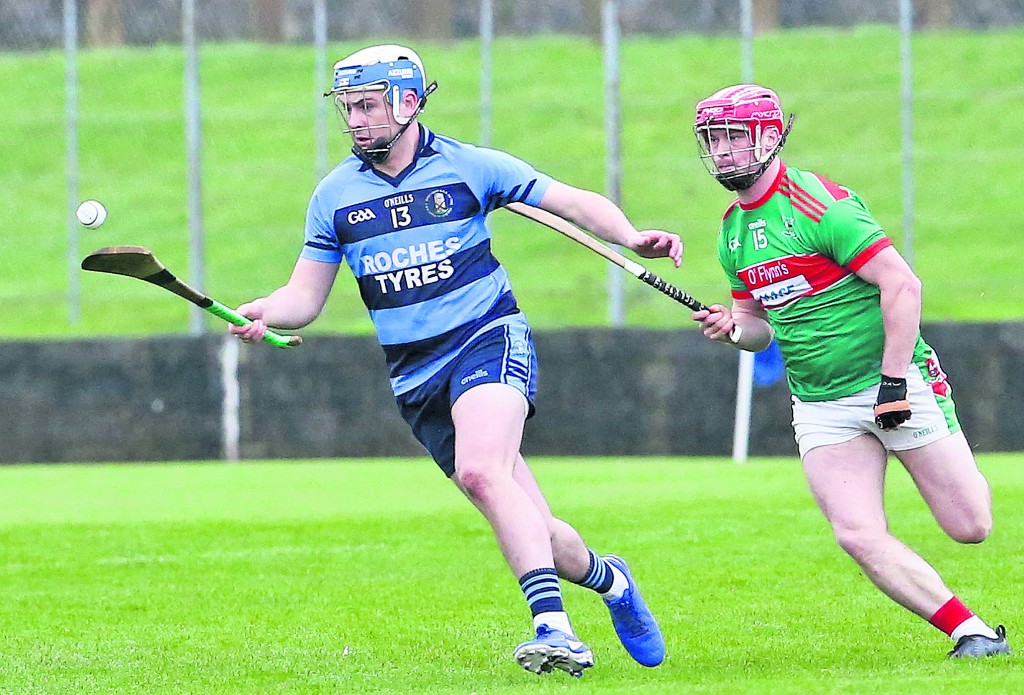 However, a strong second quarter by the East Cork side made this a little more difficult for them.
Ballysaggart opened the scoring with a Stephen Bennett free in the first minute, but it was quickly cancelled out with a similar effort from Declan Dalton. Kenneth Cashel and Dalton swapped scores by the sixth minute before the West Waterford side got on top. Brothers Stephen and Shane Bennett added points for Ballysaggart before Joe Millerick pulled one back for the Cork side. Chris O’Gorman however cancelled out Millerick’s score and when the impressive Christy Murphy pointed for Ballysaggart on 11 minutes to give his side a 0-6 to 0-3 advantage, things were looking very good for them.
But Fr. O’Neill’s hit back. Two points from Paudie McMahon meant that there was just a single puck between the sides in Ballysaggart’s favour, but soon that lead would be wiped out.
On the quarter of an hour mark, Mark O’Keeffe picked out Billy Dunne who fired past Michael Ryan for the game’s first goal. Stephen Bennett and Christy Murphy followed up with responses for Ballysaggart to draw level, but the East Cork side finished the half the stronger as Rob Cullinane, Declan Dalton and Eoin Conway all landed points but Ballysaggart put themselves in a good position going into the second half when Chris O’Gorman put over the final score of the half.
Fr O’Neill’s should have been further in front at the break as they won a late 20 metre free which Declan Dalton, the holder of three Cork senior hurling medals, opted to strike for a goal rather than to take the safer option, but Ballysaggart packed their goal line and Steven Mangan was able to block and then clear the danger.
Leading 1-8 to 0-9 at the break the Cork side had a fantastic start to the second half as Paudie McMahon played in Declan Dalton who finished past Michael Ryan to put his side in the driving seat.
However, Ballysaggart refused to lie down and brothers Stephen and Shane Bennett split the posts before Dalton pointed once more for Fr O’Neill’s just short of the midway point in the second half. A brace of scores by Stephen Bennett, both from frees left two between the sides. Declan Dalton and Christy Murphy swapped scores before the Cork side hit four scores in a row, substitute Liam O’Driscoll, Billy Dunne, Declan Dalton and another substitute Jason Hankard all finding the range to extend their sides lead.
Christy Murphy and Stephen Bennett with a brace hit back for Ballysaggart before the fourth official indicated that there would be four added minutes.
Stephen Bennett took a quick free picking out younger brother Shane who, with his back to goal, doubled on the ball in flight and while many felt it had gone into the net the big local support amongst the 2,422 attendance were disappointed that the umpire indicated that the sliotar had gone to the right hand side of Colin Sloane’s upright. Even with a three-point lead with time ticking down fast, Fr. O’Neill’s could never say that victory was theirs until the impressive Declan Dalton hit a free in the fourth minute of stoppage time.