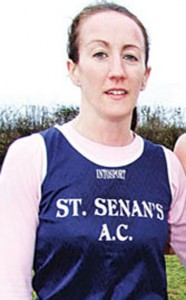 Athletes from Waterford, Tramore and West Waterford competed at the Adamstown Open Cross Country meeting on Sunday last and there were winners and a number of high placings secured. West Waterford had a very good day with two winners – Aoife Hamilton in the Junior Ladies and Tommy Fennell in the Under-12.
Second placings went to Lucy Holmes (U14) Oisin O’Riordan (U13) and Cian O’Riordan (U14) and third placings to David Gaffney (U9), Rory Fennell (U12) and Diana Chizhikova (Senior). Shane O’Riordan was fourth at Junior level as was Darina Shanley in the same grade.
Peter Cummins (U11) and Ian Holmes (U10) and Sinéad O’Brien (U16) were both fifth while sixth placings went to Caoimhe Dwyer (Junior) and Ciarán Frisby (U14). For Waterford, Sarah Abulla was second (U9), Nathan Mackey was third (U10) and Emma Caulfield fourth (U15) and for Tramore, Tom Halley was fifth (U11) while Ben Kiely was sixth in the same grade
Waterford Primary Schools Cross Country

Today (Tuesday) at 12.30pm, the Waterford Primary Schools Cross Country Sports for boys and girls will be held at the RSC .Races over short distances for each class (First to Sixth) ranging from 200 metres to 800 metres Medals for first 12 home in each race and Perpetual Cups for best Schools, etc. For further details contact 087-6889330

Sunday next Sept 20th 12 noon, 5 miles run and walk in aid of Waterford Hospice near Reginald’s Tower. Entry from 10.30 am at The Reg. Sunday, October 11th, Solas Centre Run for Life 10 miles and 5 miles walk 12 noon in Waterford City.

All clubs, including new club Cappoquin/Lismore were represented at the County Athletic Convention in St Augustine’s College Abbeyside on Friday last and a very successful 2015 was reflected upon.
Waterford athletes collected two World titles during the year through Thomas Barr (Ferrybank) in the 400 metres at the World University Games in Beijing and Joe Gough in the 800 metres over 60 in France.
In addition, Barr and Kelly Proper represented Ireland at the World Championships and at underage level Waterford athletes also represented Ireland.
Thje officers for the coming year are – Chair: Brian Scanlon, Vice Chair: Noel Power, Secretary: John Behan, Ass Sec: Brid Golden, Treasurer: Pat McGovern and PRO: Fintan Walsh.

A representative from Athletics Ireland Insurance Company addressed the meeting and with all clubs present all are now aware of who and what is covered. He reminded all clubs that they should exercise caution when signing permits for third parties.
If a claim has to be put through as a result, the excess on the policy (€500) will be sought from the club that signed the form.
Training Cover: registered club athletes are covered once they are training in a place/venue sanctioned by the club and minuted.
County Championships: all registered athletes competing in the County Championships are covered. However unregistered athletes are not, so clubs should ensure all athletes who compete are registered.
Running Groups: Athletes training with casual running groups are not covered as this training is not designated officially by a registered club. Whether or not the athlete is registered is irrelevant in this case.
The same goes for athletes competing in races that do not have insurance or are non-permitted. They are not covered, whether the athletes are registered or not. Everything is grand until something happens then the s**t hits the fan.