Euro medallist takes third Supreme Sports Star prize
European Championship bronze medallist Thomas Barr was named Park Hotel Waterford Supreme Sports Star for the third time in four years at last Saturday’s awards ceremony in Dungarvan. The Ferrybank AC athlete, who became the first Irish sprint medal winner at a major championship in Berlin last August, spoke of his delight at this latest success from his training camp in Tenerife. “It’s just fantastic news,” Thomas told Awards MC Kieran O’Connor. “I’m so sorry I wasn’t there tonight, and I know that there was a huge calibre of athlete and achievement this year, looking through the monthly award winners that I was up against, so it really is a huge accolade for me…it’s a really nice award to take home and it’s always great to be recognised in your home county.” 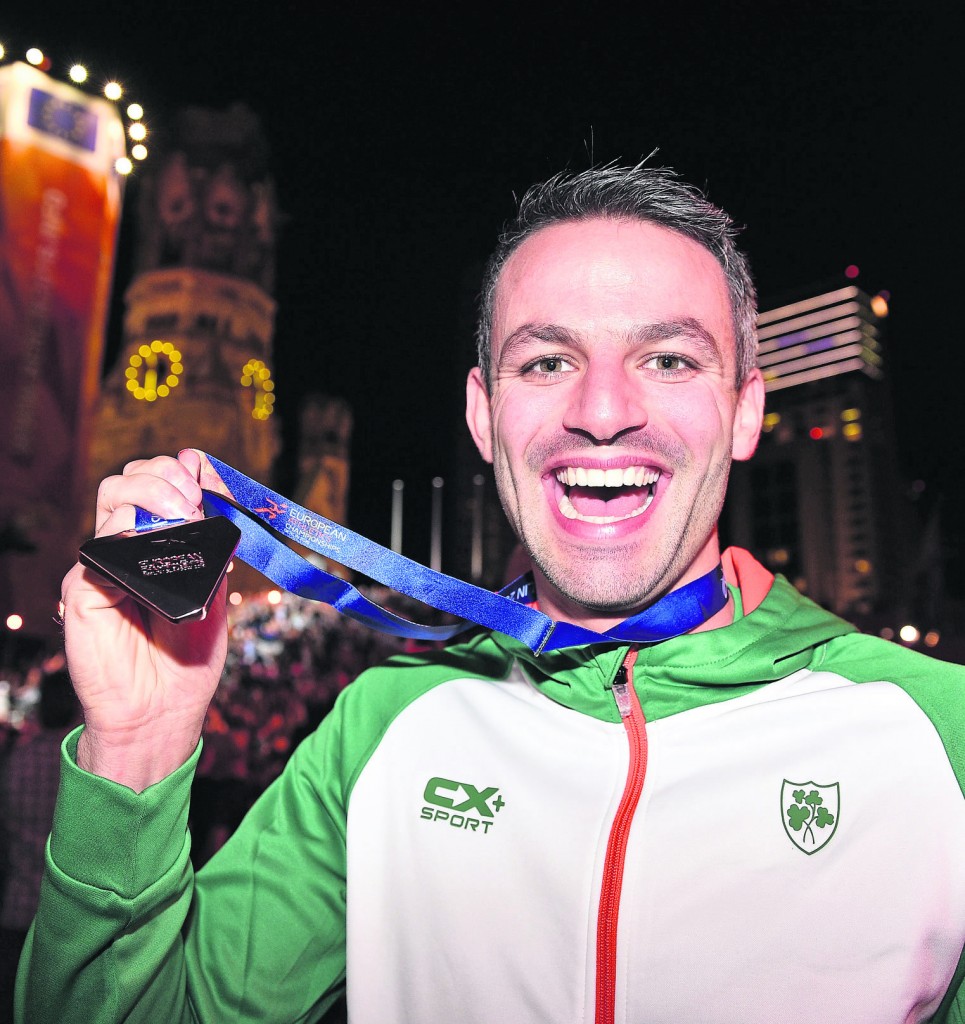 With the World Athletics Championship in Doha (Qatar) the main item on 2019’s order of business, the 400-metre hurdler is being put through his paces in the sunnier climes of Tenerife ahead of the new season.
“He’s an amazing athlete,” said his Ferrybank AC coach Brid Golden, who accepted the overall award on Thomas’s behalf, “and this is a marvellous recognition for him”. Brid added: “Tonight, we’ve again seen through the achievements of each nominee, how fantastic a sporting county Waterford is and how high a standard our athletes attain across a whole range of different sports, and that’s something we should all take great pride in. Waterford has, and continues, to punch above its weight when it comes to sport and long may that continue.”
Her club coach continued: “We’re immensely proud of Thomas. He’s just a fantastic ambassador for athletics, for Waterford and for Irish sport and his achievements speak for themselves.
Rio was remarkable, he just astounded everybody but Berlin last August was just the icing on the cake when he finally got a major medal. He really is a championship performer and we certainly hope there’s more to come from him, with Doha and then Tokyo, all things going to plan, being on the horizon.”
Reflecting on Thomas’s joining Ferrybank, Brid Golden recalled the litany of athletes, all a few years older than the new recruit who were, by then “trailing a blaze of glory across the national scene, as well as in the UK and Europe,” including his sister Jesse. “Thomas came into the club in their shadow and, to be honest, as a juvenile, he didn’t really turn too many heads – he was quite small. But as he progressed through the juvenile ranks, you could see that his technique was developing. He’s very technical runner and a beautiful hurdler, and he’s demonstrated how good he is on a global stage now, which is fantastic. And to see him land that medal last August was just amazing – we could see it coming – but we hope there’s more to come.”
Guest of Honour, double World Cross Country champion and Olympic silver medallist John Treacy, congratulated all the monthly award recipients and saluted the standards being set across the city and county. “We’re second to none here,” he told the assembled guests, “and there’s nothing like being acknowledged in your own county… “And I feel we really have got the message right with sport when it comes to participation numbers, in terms of people getting out and exercising and in terms of engaging young people in sport. And huge credit has to go to the City & County Council for delivering the Greenway and all that it has led to. It’s fantastic to see people coming to my county to exercise.”