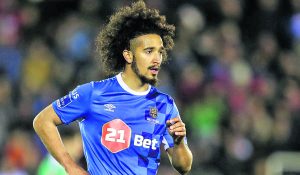 It was an extremely frustrating night in Finn Park on Friday night last. Having taken the lead after only four minutes it looked as if the Blues would record a victory in the Co Donegal venue. When the home side lost key player Michael Gallagher through injury shortly afterwards things were really looking bleak for Ollie Horgan’s men but they displayed great spirit and that fact allied to some sloppy defensive displays and the concession of a free-kick and a penalty proved costly for the Blues.
When Damien Delaney scored an equalising goal late on, a share of the spoils was very much on the cards but seconds later the Waterford defence were caught cold and Sean Boyd, who is on loan from Shamrock Rovers, was allowed to score the winning goal for Harps.
Cory Galvin, who retained his place in the starting eleven despite coming off in the 3-3 draw against Sligo Rovers, set up Aaron Drinan in the fourth minute and the striker fired home his seventh league goal of the season.That goal should have given Waterford a licence to kick on but sadly that was not the case.
The Blues were pegged back level on 24 minutes when Rory Feely was judged to have fouled Mikey Place 20-yards from goal and although Matt Connor got his hand to Place’s effort, he couldn’t stop the ball from finding the net.Bastien Héry went close to putting the Blues back in front with 31 minutes on the clock when he cracked in a shot from the edge of the penalty area, but the ball flashed just inches wide of the far post guarded by Harps keeper Burke.
To the disbelief of the Waterford faithful, Finn Harps were awarded a penalty by referee Paul McLaughlin seven minutes later when the Monaghan official judged that Georgie Poynton had committed a foul on Liam Walsh and Mikey Place cracked the spot kick to the roof of the net.
Sean Boyd should have added a third goal for his side when he got free inside the penalty area, but he failed to hit the target as his free header went over the bar.
Shane Duggan went close to restoring parity for the Blues on the hour mark when he tried his luck with a cracking volley from the edge of the penalty area, but the ball went wide of Burke’s goal before a last-ditch Rory Feely tackle at the other end denied Sean Boyd a certain goal minutes later.With time ticking down towards the 90th minute, Waterford scored what looked like being the equalising goal when Georgie Poynton sent over a corner kick to Izzy Akinade and after he sent the ball back across the face of goal, Damien Delaney was on hand to bundle the ball over the line.
But there was one final twist in the game in the final seconds as Finn Harps struck for the winner when the impressive Mikey Place slipped the ball into the path of Sean Boyd and after missing easier chances in the game, he kept his composure to fire the ball between Matt Connor’s legs.