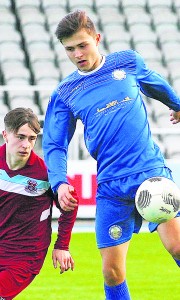 Waterford United missed a golden opportunity to keep the pressure on at the top of the U17 League of Ireland table after they were held in a scoreless stalemate against bottom side Cobh Ramblers at the RSC on Saturday afternoon last.
Next up for Waterford is a home game against third placed Cabinteely on Saturday next at the RSC and victory in that game would see the Blues stay hot on the heels of the leaders Cork City.
All clubs have three games remaining and the top two will go into the knockout stage of the competition. Taking into account the results elsewhere this could prove to be a point won rather than two points lost.
Blues captain Eoin Porter, who scored a hat-trick in the win on the road against Bray Wanderers, went close with the first chance of the game on 11 minutes when he fired in a right-footed shot from 25 yards but his effort was just wide of Dan Ruddy’s left-hand post.
Ryan Lambe called the visiting keeper Ruddy into making a fine save on 27 minutes when he took possession of the ball on the right-side of the penalty area but his low shot was kept out by the netminder.
The bottom side in the division went close to breaking the deadlock in a tame first half on 42 minutes when Cameron Henry fired in a shot from distance that just went wide of the target with keeper Jack Dolan scrambling across his penalty area.
The Blues did have a chance to go in front at the other end sixty seconds later when Luke Kiely did all the spadework to set up Gearoid Murphy but the midfielder couldn’t direct his shot from inside the penalty area on target as the sides went in level at the break.
Luke Kiely had the first chance of a disappointing contest to this point on 61 minutes when he fired in a shot from 25 yards but visiting keeper Dan Ruddy collected the ball at the second attempt as the home side tried to get their noses in front.
Owen Wall, who replaced Sam Hickey at the half time break, went close to firing his side in front three minutes later when he latched onto the ball on the edge of the penalty area but he failed to trouble the Cobh keeper Dan Ruddy as the ball flew over the crossbar.
A decent set piece routine nearly yielded the breakthrough for Cobh Ramblers on 71 minutes when Danny Lucey put a brilliant corner kick to the near post where midfielder Cameron Henry was free but his right-footed effort was just wide of the target.
Cobh keeper Dan Ruddy denied Sean Roche the lead goal on 76 minutes when he took a pass from Luke Kiely but his low right-footed shot from the right side of the penalty area was turned around the posts at the expense of a fruitless corner kick.
Justin Croke, who replaced Adam Feeney, turned provider for Owen Wall four minutes later but his shot on the run was straight at the visiting netminder before the assistant referee Christopher Maher ruled out an effort from Killian Cooper for offside.
As the Blues piled on the pressure in the final five minutes, Luke Kiely went on a run into the penalty area on 86 minutes but he drilled a shot wide of the right-hand post before Sean Roche missed a sitter to give the home side all three points a minute later when he headed wide from two yards of an open goal after a Croke cross.
Roche missed another brilliant chance to give his side a late winner in the final minute when he took a pass from Justin Croke on the left-side of the penalty area but his effort was just wide of the far post with keeper Dan Ruddy beaten before Owen Wall fired wide deep into added time.
WATERFORD UNITED: Jack Dolan, Tommy Teer, Shane Ryan (Cian Flanagan `84), Sam Hickey (Owen Wall `46)s, Darragh Corcoran, Gearoid Murphy, Adam Feeney (Justin Croke `76), Jordan Molloy, Eoin Porter, Ryan Lambe (Sean Roche `46), Luke Kiely
COBH RAMBLERS: Dan Ruddy, Dan Moloney, Danny Lucey, Rob Slevin, Dylan Wentz (James O’Connell `65), Matt Murray, Kajus Vitlevicius (Liam Milner `53), Cameron, Henry, Ryan O’Connor, Jamie Kent, Alex Smith
REFEREE: Adam Tszample assisted by Christopher Maher and Sean Purcell.