Fergal O’Brien’s Waterford Senior Camogie team have been drawn in a group of death the National Camogie League which gets underway in February.
Nine teams will compete in this year’s division one league split into two groups one of five, the other of four, a change from the two groups of five last year. Wexford were relegated and with Tipperary’s second-string side beating Kilkenny’s second-string side in the division two final, no side came up to replace the model county in division one. 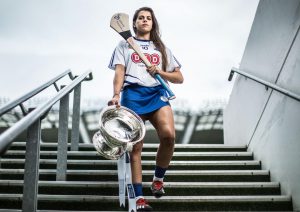 Waterford have been drawn in Group One alongside last year’s National League and All-Ireland Championship Runners-Up Kilkenny, a Cork side that won the All-Ireland Championships most recently in 2017 and 2018, Clare and Offaly.
Last year’s All-Ireland and National League Champions Galway are in Group two along with Limerick, Tipperary and Dublin.
Waterford will get their campaign off to a very tricky start with an away game against Cork. The game will take place in Pairc Ui Chaoimh on February 2 and will be the curtain raiser to the National Hurling League game between Cork and Tipperary. That game has a 7pm throw in.
Waterford’s first home game is a mouth-watering south east derby against Kilkenny on February 9 and after a weekend off in which the third level camogie competitions will take place, Waterford have another home game on February 23 when they host Offaly.
On the same afternoon Liam Cahill’s Waterford side take on Galway in Walsh Park but the camogie game is not down to be part of a double header. On the same afternoon Kilkenny and Clare play a double header at Nowlan Park.
Waterford’s final game in the league is an away game against Clare. This game is fixed for March 8 but would be brought forward 24 hours should Gailltir reach the All-Ireland club final and a replay was needed.Meanwhile Waterford will take part in this year’s Minor A All-Ireland Championship and are in group two along with Cork, Laois, Dublin, Tipperary and Wexford, with Antrim, Offaly, Galway, Clare and Kilkenny competing in Group one.
Waterford will begin the competition with an away game against Wexford on the weekend of February 14 and 15, the day of the game depending on whether players will be involved in the secondary school’s competitions.
Niamh Rockett
Niamh Rockett has been reappointed as Captain of the Waterford Senior Camogie team in 2020. The Saint Anne’s club player is one of the longest serving players in the county playing and is the proud owner of two All-Ireland medals playing with the Déise, a junior medal won as a teenager in 2011 and an intermediate medal won four years later.
After a brilliant year with Waterford in 2018 former manager Donal O’Rourke appointed her as captain last year where she led by example, and along the way she hit some crucial scores for her side as they reached the All-Ireland quarter finals for the second year in a row, losing out to eventual champions Galway in 2019.
Meanwhile Cappoquin’s Lorraine Bray, who along with De La Salle’s Beth Carton won an All-Star award in 2019 is to be the counties vice-captain.