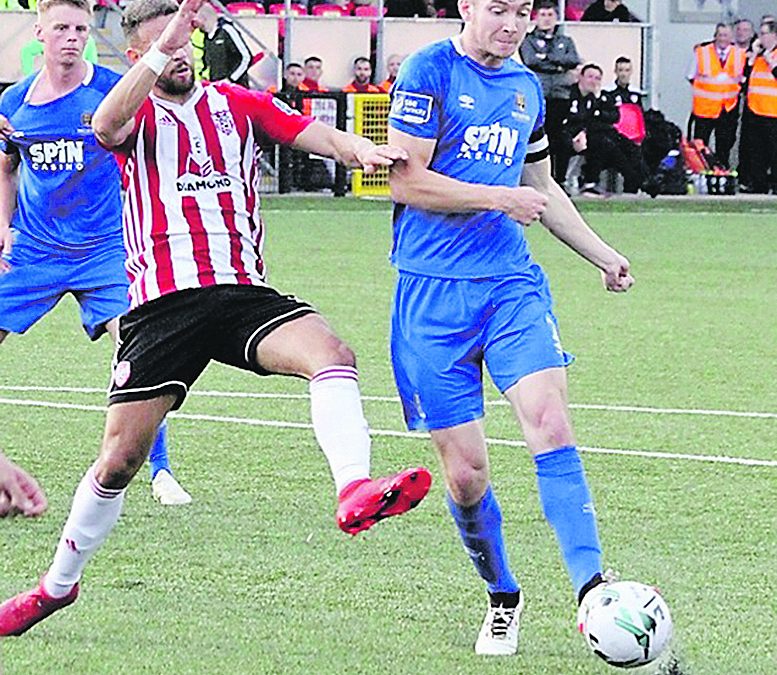 League of Ireland, Premier Division
Derry City 2
Waterford FC 0
Derry City proved far too strong for Waterford FC at the Ryan McBride Stadium on Monday week last.
The previous Friday the Blues had defeated UCD in the Belfield Bowl courtesy of a late strike from Dean Walsh but on this occasion the visitors found it difficult to muster a shot on goal during a one-sided 90 minutes. Waterford manager Alan Reynolds made three changes from the team which beat UCD. Kenny Browne came in at the back for Maxim Kouogun. Karolis Chevedukas played in the middle instead of J.J Lunney and Dean Walsh replaced Michael O’Connor in the lone striker role. 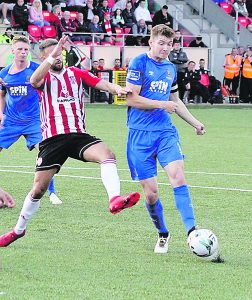 David Parkhouse scored the two Derry goals and his second strike was worth the long journey alone.
A player who lined out for the Blues in two pre-season games, Argentinian Gerardo Bruna, ran the show in the middle of the park and was sublime all through. Jamie McDonagh was also brilliant for the hosts but sadly the Waterford players were all at sea during the entire contest. This was Waterford’s last league game until August 16th when Cork City come to the RSC.
A League Cup semi-final against Derry, once again at the Brandywell and an away FAI Cup match against Maynooth University Town may be just what the players require before they return to the task of securing vital league points.David Parkhouse opened the scoring on 14 minutes when he got on the end of a Ciaran Coll cross and looped the ball to the net ahead of Matt Connor.Ally Gilchrist’s header on 26 minutes went wide before Jamie McDonagh did well once again down the right flank three minutes later but David Parkhouse couldn’t direct the ball on target.
The Blues had a spell of possession and forced three corner kicks.Derry keeper Peter Cherrie dropped the ball, but neither Georgie Poynton or Dean Walsh could capitalise.Derry doubled their lead with a stunning strike on the stroke of half-time Michael McCrudden’s cheeky flick picked out David Parkhouse 30-yards from goal and he arrowed a stunning right-footed strike to the left-hand corner of the net past keeper Matt Connor.Waterford needed an improved performance in the second half, but it didn’t really materialise as Derry looked comfortable in possession.
Gerardo Bruna put in a teasing delivery from a free kick on the hour mark that only needed a touch at the back post from Parkhouse, but the striker failed to connect with the ball.
Alan Reynolds introduced both Michael O’Connor and Cory Galvin but things didn’t really improve in an attacking sense.David Parkhouse should have completed his hat-trick on 69 minutes but the striker had his close-range effort saved by the legs of Blues keeper Connor.Parkhouse had another effort soon afterwards and Darren Cole had a great chance late on to increase Derry’s lead, but he headed wide after McDonagh’s right-wing corner kick.