City Clubs Must Back the Walsh Park Plan

“City clubs must back the Walsh Park plan”
Waterford GAA County Board Chairman Paddy Joe Ryan has called on the city’s GAA clubs to throw their weight behind the Board’s plan to redevelop Walsh Park. Speaking at last Wednesday’s East Waterford GAA Convention held at the St Saviours’ Clubhouse in Ballybeg, the Chairman stated: “I’d just like to say that we need all the clubs in the city to come on board…we need the support of the clubs. All the criticism of the redevelopment of Walsh Park seems to be coming from the city – I know there’s one (individual) from Dungarvan after ringing about 400 times but most of the opposition to what we want to do in Walsh Park has come from the city and I’m surprised because Walsh Park is a beautiful venue, it’s a historic venue and (its status as the home of Déise GAA) should never, ever be changed, honestly.” 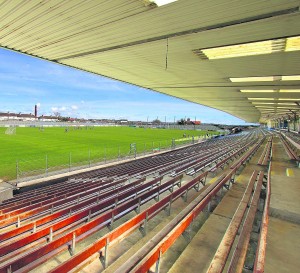 Waterford County Board Chairman Paddy Joe Ryan has called on the city’s GAA clubs to get behind the Walsh Park redevelopment project. | Photo: Noel Browne

Paddy Joe told delegates at a well-attended convention: “Moving out of Walsh Park would be lovely if we could lift it and move it and it would cost us nothing. We had a suggestion recently that we should go to Carriganore or that we should go to Dungarvan for that matter – much the same thing. We could do that but if we did, we’d have to levy our clubs or like an individual said on the radio, buy it (a new stadium) like you’d buy a house, and make every club pay €10,000 a year for 30 years and you still mightn’t have it paid for after all that. These figures haven’t been plucked out of the sky, they’re true figures but we’ll have a lovely stadium in Walsh Park. You’ll be proud of it and I’ll be proud of it. We’ll play big games there and we’ll play small games there. We’ll have it for our Bord na nÓg finals there, we’ll have it for our county finals, we’ll have it for our school finals and we’ll have it for our ladies football and camogie finals – and we’ll look after it.”
The Chairman said that tillage and grassland expert Martin Kehoe of the Wexford-based Kehoe Farming company had run his eye over the Walsh Park sod two years ago and concluded that “the sod in Walsh Park is as good as Fraher Field, but ye don’t look after it, so the solution is to look after it. So again, let’s all stick together and let’s make sure that Walsh Park will be something we can all be proud of and I’m looking forward to seeing bulldozers in Walsh Park, I can tell you, because (that project) will really turn a huge corner for the Association here in Waterford without any huge debts on any clubs. Members of the (County Board) Executive have made many trips to Croke Park and to the Munster Council over the last four to five years – this didn’t start last year – this has been going on since Timmy O’Keeffe’s time (as County Secretary), looking for funding and that’s what we’re trying to do, to put the least burden possible on the clubs here in Waterford. We need all of our 50 clubs so I hope that when we gather for next year’s Eastern Convention that Walsh Park will be something we’ll be looking at and asking about when it will be re-opened and I look forward to that day.”
Adding his own two cents on the stadium issue in his final report as East Waterford GAA Secretary, Mount Sion’s Seamus Cleere told delegates: “As somebody who’s involved in the process, I would be quite hopeful that works will be given the green light. Walsh Park is the home of Waterford GAA and long may that continue. I think that all clubs in this division should promote Walsh Park. It’s our home. There’s nowhere else in this division that’s home and Walsh Park should be promoted as our home.” Re-emphasising the primacy of the GAA club member, Paddy Joe Ryan said that this cohort represented “the most important people in our Association”.
He added: “When I get criticised on Twitter, on radio and in the media, it’s nobody from the clubs that’s doing it – it’s people outside of the clubs. I’m extremely grateful to the support of the clubs from the Eastern Division over the past 12 months, particularly from individuals in clubs for their support day in, day out, be it phone calls, texts and various other forms of communication. I’d like to thank those people in particular. Their support is very, very much appreciated.”