Cool Blues stroll into round two

FAI Cup. Round One
Maynooth University Town 0
Waterford FC 2
Waterford FC put the disappointment of losing to Derry City in the semi-final of the EA Sports Cup the previous Monday when they came out on top against non-league Maynooth University Town at Rathcoffey Road on Sunday afternoon. Manager Alan Reynolds made two changes from the starting eleven that lost in extra-time to the Candystripes. Kevin Lynch came in for the suspended Rob Slevin and Cory Galvin replaced the injured Zack Elbouzedi. This was a contest that the Blues dominated throughout and were it not for an inspired performance by the home goalkeeper Demer Sterio the final score would have been much larger. 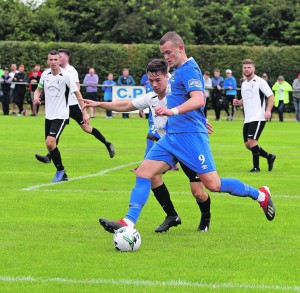 Michael O'Connor in control for the Blues against Maynooth at Rathcoffey Road on Sunday last.

Barry Prenderville, the Maynooth manager set his team out to stifle the visitors and they did just that until the 42nd minute but when Shane Duggan broke the deadlock the final outcome was never in any doubt.
Next up for Waterford is Friday’s massive Munster Derby game against Cork City at the RSC.
The Blues started brightly and missed a glorious chance to go in front on nine minutes when Tom Holland whipped in a left-wing corner kick to Maxi Kouogun at the back post, but somehow he managed to head wide of an open goal from two yards.
Maynooth keeper Demer Sterio denied Walter Figueira the breakthrough goal on 19 minutes when the centre forward latched onto a deflected Tom Holland through ball, but just as he was about to pull the trigger, the netminder came out to save at his feet.JJ Lunney was the next player to go close for a Waterford side that were on top at this stage when he took a pass from Kevin Lynch on the left-side of the penalty area two minutes later, but keeper Sterio saved his well struck shot at the second attempt.
Sterio continued to impress between the sticks as he cut out another dangerous situation on 25 minutes when Shane Duggan sprayed the ball out to the right for Figueira who cracked in a shot that was superbly saved under pressure from Tom Holland. The Blues had to be patient as Maynooth made life difficult in that opening half, but the lead goal did arrive on 42 minutes.Rory Feely sent over a cross that was touched on by Michael O’Connor for Shane Duggan, who finished past Demir Sterio from 10 yards.The brilliance of Sterio denied Alan Reynolds’ side a second goal sixty seconds later when a neat move saw Kevin Lynch play in O’Connor, who fed Tom Holland, but his stunning strike destined for the top corner was kept out.
Kenny Browne gave his side breathing space when he added a second goal for the Blues on 57 minutes when the he meet a Shane Duggan corner kick and his downward header beat keeper Demer Sterio from six yards.
Walter Figueira had a good chance to put the game to bed for Waterford five minutes later when he beat the offside trap to race onto a Cory Galvin pass, but his effort from the right side of the area was saved by the feet of Sterio. The Maynooth goalkeeper continued his heroics with another top save on 70 minutes when John Kavanagh released Figueira down the left side and after turning onto his right-foot, his cracking drive was saved at the near post.
The remainder of the game saw Waterford coast through proceedings and Sam Bone eventually got the chance to get some time under his belt when he came on after 72 minutes to make his long-awaited debut following a two-month injury problem.