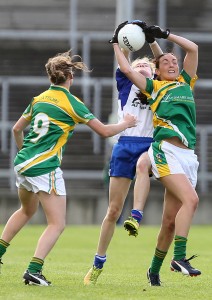 A magnificent second half performance at the Gaelic Grounds in Limerick last Saturday saw Waterford advance to a first All-Ireland Intermediate Final since 2012 following victory over Leitrim.
Aileen Wall produced a Player of the Match performance, registering 1-3 for Waterford but in truth the victors had several more fine performers on the day.
While 11 points separated the two sides at full-time, the margin would have been much higher but for some excellent goalkeeping by Leitrim’s Michelle Guckian who limited the damage for the Connacht championsr.
Pat Sullivan’s charges registered 19 scores from their 29 offensive opprotuniieis while Leitrim conveted 8 from 16, which underlines Waterford’s dominance.
In what proved a low scoring first half, Waterford held a 1-3 to 1-2 lead at the break but emerged with force upon the resumption, converting the first five scores and never looking back thereafter.
It was the Deise who ,ade all the early running in this game and had three goal chances in the first three minutes of the game but fond the net with none of them.
However, Leitrim’s first attack of the game found the target as Áine Tighe, soccer style, took the ball around Katie Hannon with her right foot before slotting the ball home.
But Waterford’s response was rapid as Aileen Wall finished to the Leitrim onion sack within a minute.
Yet the Connacht champions responded well to the brilliant Ballymacarbry player’s goal with points from Áine Tighe and Dearbhaile Beirne to send them two clear.
However, Waterford finishef the half the stronger of the two sides as Maria Delahunty from a ’45 and a brace of Sinead Ryan points gave them a slender lead going in at the break.
By contrast, the second half was all Waterford and a brace of early Maria Delahunty frees strenghthened the Deise’s grip on proceedings.
The Ballymacarbry pair of Aileen Wall and Sinead Ryan struck points in quick succession before centre-back Elaine Power chagred forward to send Waterford 1-8 to 1-2 ahead.
Aine Tighe pulled two points back for Leitrim but Aileen Wall added one in between at the other end to keep things ticking over for Port Láirge.
Sinead Ryan added another white flagger to give Waterford a six-point advantage and that was stretched to nine soon afterwards as substitute Michelle Ryan fisted an inch perfect Aileen Wall delivery into the net in the 43rd minute.
A super point from Grainne Kenneally and another from Maria Delahunty put Waterford 2-13 to 1-4 in front before Leitrim briefly rallied.
Aine Tighe and Michelle Heslin pointed before Tighe raised her second green flag of the afternoon to leave seven between the sides with 13 minutes remaining.
This however proved to be the Connacht sides last score of the game as Waterford finished the stronger, emphasisng their all-round dominance.
Aileen Wall put Waterford eight points clear, and a further Maria Delahunty brace secured a double digit advantage.
With All-Ireland Final statring places firmly up for grabs in the closing stages, Michelle Ryan boosted her hopes of regaining a starting place in the team in the closing stages when converting a point to add to her earlier goal.
This was a job very well done by a team which has retained its lean and hungry look. Roll on the Final!
Waterford: Katie Hannon; Mairead Wall, Michelle McGrath, Linda Wall; Elaine Power, Megan Dunford, Louise Ryan; Karen McGrath, Emma Murray; Grainne Kenneally, Maria Delahunty, Aileen Wall; Hannah Landers, Sinead Ryan, Mary Foley.
Scorers: Maria Delahunty (0-6; 0-2f, 0-1 45’), Aileen Wall (1-3), Sinead Ryan (0-5; 0-2f), Michelle Ryan (1-1), Elaine Power and Grainne Kenneally (0-1 each).
Substitutes: Michelle Ryan for Hannah Landers (37 mins), Caoimhe McGrath for Mary Foley (40), Aoife Murray for Sinead Ryan (55), Louise Ryan for Nicola Fennell (56) and Nora Dunphy for Mairead Wall (58).
Leitrim Michelle Guckian; Claire Beirne, Mairead Stenson, Róisín McHugh; Melissa Hewitt, Sharon Kerrigan, Áine Heslin; Sarah McLoughlin, Anna Conlon; Deirdre Ward, Áine Tighe, Loraine Brennan; Dearbhaile Beirne, Niamh Tighe, Carla LeGuen.
Substitutes: Michelle Heslin for Áine Heslin (41 mins) and Emma Guckian for Carla LeGuen (47).
Scorers: Áine Tighe (2-4; 0-2f), Michelle Heslin and Dearbhaile Beirne (0-1 each).
Referee: Stephen McNulty (Wicklow).