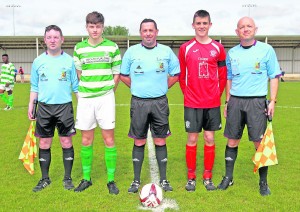 Two weeks after winning their first ever Youth A League title, De La Salle completed the double in Ozier Park on Sunday last when they edged out the Villa thanks to a second half penalty.
This has been an extraordinary season for the club which was founded in 1975 and one which will live in the memory for ever more by those people who have devoted their lives to the club.
The two clubs who contested this decider know each other inside out as they have been battling it out for the two titles since the outset of the season and as a result the opening 15 minutes proved to be a cagey affair with neither side prepared to yield an inch.
However the contest broke into life after 20 minutes when Alex Casey tried his luck for De La Salle with an angled strike from the right but the ball whistled wide of the fat upright. Alex Casey was back in the thick of the action once again ten minutes later when he picked out Cian Kervick with a superb pass but the latter was inched wide with his effort from just outside the 18 yards box.
The Villa came on strong in the last minute of the opening half. Owen O’Mahony went charging down the right flank before unleashing a shot on the run but the De La Salle goalkeeper Shane Burke did well to hold the ball.
Moments later Luke Walsh cracked in a rocket of a shot from 25 yards but again Shane Burke was equal to the task by tipping the ball away to safety.
The all-important breakthrough arrived on 58 minutes and as things transpired it proved to be the goal which was to create history.
Jack Walsh played a long ball forward from the middle of the park. Cian Kervick gave chase but he was upended by Sean O’Keeffe inside the 18 yards box and referee Gary Fitzgerald pointed to the spot immediately.
Tommy McGrath, who also played on the victorious Waterford Inter League team this season, stepped up to take the resultant penalty and he gave Niall McSweeney no chance whatsoever by planting the ball into the left corner of the net.
Shane Burke then produced two vital saves for the victors. On 72 minutes he raced off his line to keep out a low shot from substitute Tamino Browne.
Burke then dived to his left to turn away a blistering strike from Luke Walsh seven minutes later.
De La Salle closed out the game from then to the end and celebrated an historic double with their friends and family members.
John Foskin of the Waterford and District League presented the cup to the captain Ivan Sinnott and Shane Burke picked up the Man of the Math award.
DE LA SALLE:Shane Burke, Peter Grogan, Blake Kelly-Oats, Tommy McGrath, Tim Skelly, Ian Sinnott, Luke Flynn, Jack Walsh, Cian Kervick, Alex Casey, Tommy Gough. Rest of squad. Conor Purcell, Alex Kennedy, Benji Ajikobi, Ben Connors, Samuel Adebayo.
VILLA: Nial McSweeney, Owen Morrissey, Kieran Sadey, Sean O’Keeffe, Liam Barber, Luke Walsh, Conor Kilgannon, Niall O’Keeffe, Jack Power (Daniel Hannigan `84) Luke Kervick (Tamino Browne `70) Daniel Ogundeleh. Rest of squad.Daniel Olasunbo, Shane O’Neill, Dylan Paul, Oghoda Osarhierme, Ben Curham.
REFEREE: Gary Fitzgerald. Assistants Noel Purcell and Gavin Keyes