National Football League Division Four
Waterford 1-8
Derry 2-12
Waterford’s fading hopes of promotion from Division Four were extinguished by favourites Derry at a blustery Fraher Field in front of a gate of just 233, of which 135 were paying patrons. A Derry side featuring just five starting members of the team which defeated Waterford in their 2017 All-Ireland Qualifier meeting at the same venue, weathered the late dismissals of Jason Rocks and substitute Conor McAtamney to take both points on offer. While two seals enjoyed the February sun on a mudflat on the River Colligan which flanks one end of the old Dungarvan venue, Derry braced themselves for a first half in which they played into a typically strong West Waterford wind. 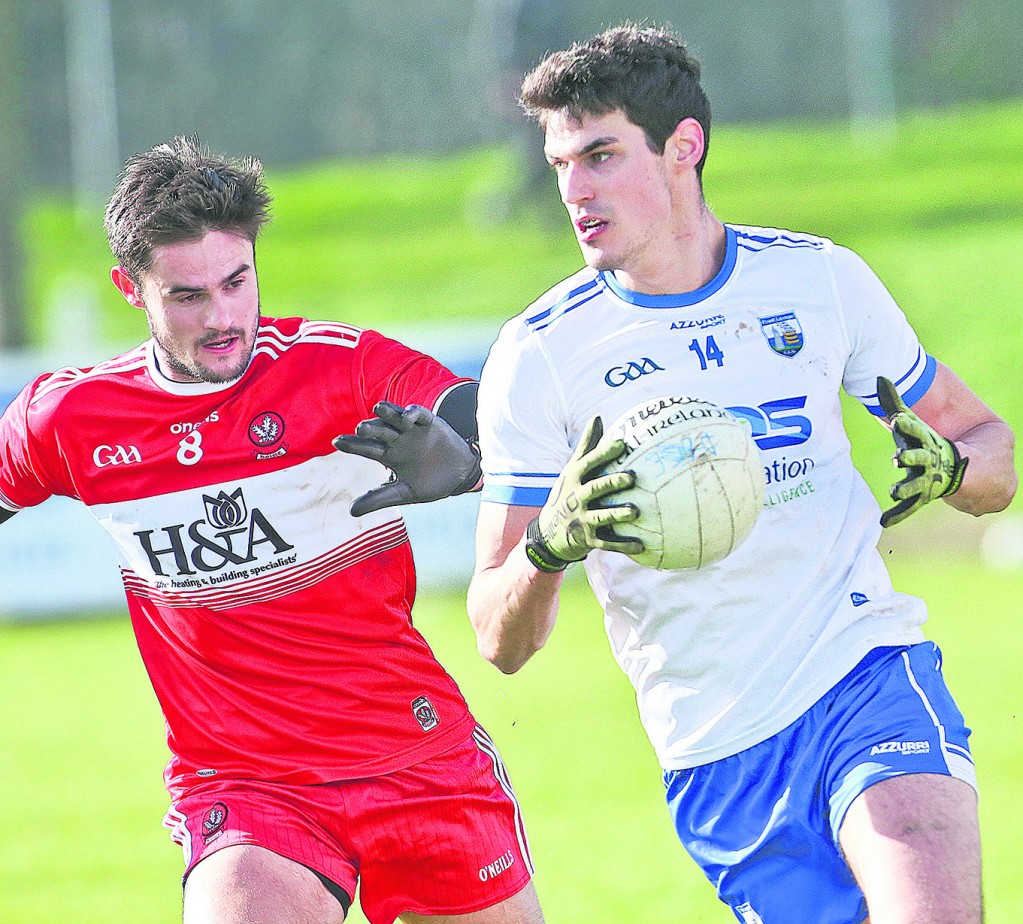 Emmett Bradley opened the scoring with a fourth minute free, and the initial exchanges were dominated by a Derry side decked out in their all red change colours. Waterford genuinely struggled to get an early touch such was the visitors’ domination of both territory and possession, but they took the lead in the 12th minute following Sean Whelan Barrett’s well-taken goal, slipping the ball beyond Thomas Mallon following fine build-up play involving James McGrath and Conor Murray.
Derry’s Emmett Bradley picked out brother Christopher for a fine 15th minute point from 25 metres, before Jason Curry mustered an immediate reply from Waterford with a free.
The hosts then found some momentum and stretched their lead to four points through white flaggers from Conor Murray and Fearghal Ó Currín in the 15th and 18th minutes respectively. But Derry soon replied through the lively Niall Toner, who marked the ball before delightfully fading it inside the Town End uprights. Toner was upended after 22 minutes, an indiscretion punished by Christopher Bradley’s free only for Waterford to respond in kind barely a minute later through the impressive Conor Murray, with Jack Mullaney restoring their four-point lead by the 25th minute.
Derry, for all their territory and possession, could have scarcely believed they were in arrears as the half-hour approached, but they hauled themselves back into contention through a superbly struck goal by Shane McGuigan, who rifled the ball into the roof of Aaron Beresford’s net following Christopher Bradleys lay-off. Fearghal Ó Currín saw an injury-time shot cannon high off the post in first half-injury time in what was the last significant action of the half. At the break, the sides were tied on 1-5 apiece.
Ten minutes elapsed before a second half score was registered through Waterford substitute Jason Gleeson, with Emmett Bradley cancelling out that score with a well-struck free two minutes later. Derry’s Karl McKaigue charged forward from the half-back line to land a fine 46th minute point from the left flank following extended phases of lateral ball.
Five minutes later, and with the yellow card tally starting to build, an unseemly fracas broke out in front of the Waterford dugout, an altercation which involved at least a dozen players, with some Deise management unavoidable caught up in the morass of limbs.
Once the dust settled. Derry’s Jason Rocks and Waterford’s Brian Looby were deemed the guiltiest of those involved in the melee, with both receiving yellow cards. Jason Curry’s 53rd minute free, brought in 13 metres due to dissent, brought the sides level, with Sean Whelan Barrett pointing five minutes later, after Aidan Trihy’s scoring effort had been half-blocked. Alas, a hard working Waterford would not score again thereafter.
Just shy of the hour mark, Derry substitute Conor McAtamney brilliantly faded a shot high and true between the ‘country end’ posts to bring the sides level for the fourth time, to the delight of the small travelling support. With eight minutes of regulation time remaining, Christopher Bradley restored Derry’s lead following Padraig Cassidy’s pass. Moments later, to his bewilderment, Jason Rocks was awarded a second yellow card for an alleged off-the ball indiscretion to leave Derry a man down.
And things got even worse barely a minute later when Conor McAtamney also received his marching orders for a second bookable offence. Derry, reduced to 13, led by one. A great opportunity for an unexpected win beckoned for Benji Whelan’s men.
The loss of the Derry duo saw Waterford naturally take a few more offensive risks but this in no way perturbed Shane McGuigan, who found his range superbly to send the visitors two points clear. Two minutes from time, advancing Waterford corner-back James McGrath lost possession to Padraig Cassidy, who released the pacy Niall Toner for a deep run. Toner bore in on goal and offloaded to the equally fast Paul McNeill, who palmed the ball into the net from point blank range.
Shane McGuigan’s 70th minute effort would have had them calling for Hawkeye in another stadium but this point, in addition to Enda Lynn’s injury-time point, rounded off a fine and deserved win for Derry. Once again, Waterford’s footballers were left digesting a dose of the what might have beens. An away assignment in Wexford is next up come February 24th.