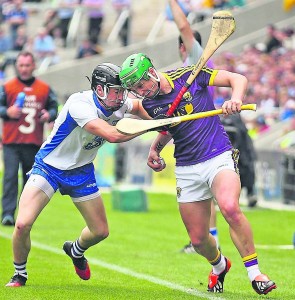 “The world ain’t all sunshine and rainbows. It’s a very mean and nasty place, and I don’t care how tough you are, it will beat you to your knees and keep you there permanently if you let it. You, me, or nobody is gonna hit as hard as life. But it ain’t about how hard you hit. It’s about how hard you can get hit and keep moving forward; how much you can take and keep moving forward. That’s how winning is done!” – Rocky Balboa
When the great book of our national game is written, one can safely assume that Waterford’s four-point win over Wexford at this sparkling new stadium won’t overtly figure in the author’s notes.
For this was 70 minutes of hurling in which rhythm was made near impossible to establish given the approaches of both sides, but that it transpired in the manner it did was of no great surprise to this observer.
Nor should it be to anyone with a greater knowledge of the game and a lengthier lifetime of inter-county match-going experience than what this reporter possesses.
Would it have been preferable to see both teams playing a slightly more conventional game and it would it have pleased me to see Waterford open up Wexford’s full-back line? Yes on both counts.
But take where the collective mood of the city and county was at full-time following the defeat to Cork, and look at where the team is now: safely through to an All-Ireland semi-final, with Kilkenny toppled en route – and all while the hay was saved.
Now tell me, hand on heart, that we’d not have taken that as our Championship fate amidst the over-reaction to losing to the eventual Munster champions at Semple Stadium?
Most would have gladly sacrificed a full limb, let alone a hand, to see Waterford within 70 minutes of an All-Ireland Final, in what’s been the most open Championship, 2013 aside, in two decades.
“You’re too close to the team,” someone intoned to me on social media a few weeks ago; i.e. that I couldn’t see the woods from the trees when it came to how the team was playing.
Well, I’ve never been a cheerleader and I’ve done my best to never reduce this to fan with pen reportage: that’d do the team, the trade and the trusted readers we’ve held onto a disservice.
Sure, I’d love to see Waterford playing with the level of wristy flair that made them the neutral’s favourites a decade or more ago. I’d love to see goals flying in during every match. I’ve never hidden those sentiments, nor shall I ever.
But I’m conscious that I offer such expressions in the context that my only management experience has been co-coaching an Under-11 soccer team in my early 20s, and occasionally selecting a seconds rugby team which I captained in my late 20s.
I’m also conscious that the team I’ve most frequently written about these past 18 years hasn’t won the biggest prize in the sport for 58 years. But that shouldn’t preclude me from offering my view based on those years of press box experience – and I don’t feel it has.
Waterford is a traditional hurling county without a tradition of winning a bevvy of hurling titles. And sometimes, as a manager, taking our ‘what might have been’ narrative into account means you’ve got to try and do something different to make something happen.
And sometimes, as supporters and observers of such a team, we need to retain faith in what managers nowadays increasingly describe as the process. And if the process leads us to victory, then how can one quibble with that?
I need little reminder about all the wonderful Championship clashes down through the years in which the Deisemen have, too often, come out the wrong side of a result. Heroism in defeat is like being the ‘sweet’ guy who never gets the girl. Sure where’s the fun in that?
Old Blue Eyes nailed it about having his fill and share of losing. We’ve had enough tough days and long trips home. This Waterford squad has been hit hard when things haven’t gone to plan, but they’ve kept moving forward. And while they shouldn’t be exempt from criticism, the least they’re entitled to is the faith of their supporters. We move on. Cork await once more on August 13th.