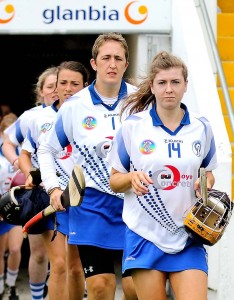 Catriona McGlone leading Waterford out for their All-Ireland semi-final clash with Meath.

What a year it has been for Waterford Camogie. National League Division Two champions, with 10 wins from 11 outings, Sean Fleming’s youthful side are now just an hour away from securing senior camogie status for the first time in the county’s history.
And having already defeated Kildare in both the League and Championship this year, whether they like it or not, the side captained by Catriona McGlone will take to the Croke Park sod as favourites to land the All-Ireland Intermediate title.
“It’s huge to be in an All-Ireland Final,” admitted the Lismore clubwoman. “We’ve been unbeaten in the League and All-Ireland Championship and to come through the semi-final the way we did, after Meath threw everything at us, was very satisfying.”
Coming from nine points behind to secure Sunday’s passage to Croker was, as Sean Fleming put, real “character building” stuff. But the nature of that victory has also ensured that no-one in Port Láirge colours will be taking anything for granted come Sunday’s 2pm throw-in.
“At half-time, we knew going into the dressing room that we weren’t after playing anywhere near the level we’ve produced in most of our matches this year.
“But after the chat we had in the dressing room with Sean, Brother Phil (Ryan) and Chris (Dempsey), they made it clear to us that they knew we were capable of winning the game, to cut loose and just play the way we’re capable of, to show what we’d shown in training and it came off in the end.”
Catriona added: “I think we had a bit of nervousness at the start; Meath were playing a sweeper and we hadn’t adapted well to that either, but thankfully it all worked out well in the end.”
As for Kildare, the Deise skipper said they’ll not be underestimating their opposition or the occasion for that matter.
“Is it a help having played them already? Sure it is and it isn’t. They’re a physical team and we know what in for come Sunday but it’s mostly how it goes on the day, I feel.
“Against Meath, we definitely didn’t play at the standard we know we’re capable of, and we’re all determined to produce a 60-minute display and hopefully that’ll be good enough to get us across the line. We know we’ll have to be at our best, and that’s the way it should be when it comes to an All-Ireland Final.”
Admitting to being an “easy going captain”, Catriona added: “I wouldn’t be one for too much talking or anything! When Lismore won the County Final, it was up to the club to nominate a captain – they chose me and look, no two ways about it, it’s a huge honour, to captain Waterford in an All-Ireland Final…
“The last thing on my mind now is going up the steps of the Hogan Stand (to be fair, it was I who introduced the prospect during our chat!). I can’t look afford to look any further ahead than the job that’s in front of me, the players who’ll start the game and, of course, our subs and the whole panel. It’s all about two o’clock in Croke Park next Sunday. After that, we’ll rest that look after itself.”
Best of luck to Catriona and her panellists. “To win would be unreal,” she concluded. It sure would.